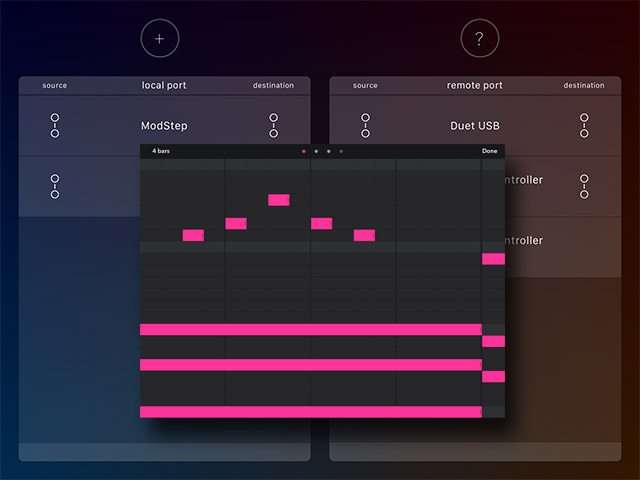 Auxy is a cool and fairly recent iPad app that generated lots of interest since its release a few months ago. A mix between a design challenge (inspired by the ‘less is more’ principle) and traditional piano-roll beat-making that is going to grow in the next months.
So far, Auxy’s sound options are limited to a few presets, but what if you want to use your powerful DAW sounds instead?
Now there’s a new solution (way more reliable than WiFi or Bluetooth shaky connections), midimux, an iPad app (+ a free Mac server software) that talks MIDI to your Mac using the standard USB to lightning or 30 pin cable. Brilliant, ah?
You may have already seen some videos of midimux integrated with a Live-based setup. These days I’ve been testing midimux with my main DAW, Logic Pro X.
I’ve tested it with several apps (Animoog, IK Multimedia apps, etc.) but here I would like to show you how Auxy can benefit from midimux, using Logic’s software instruments to replace Auxy’s original sound.
It’s just a quick video (actually two), but it should do the job.

Note: to use Auxy via MIDI you need to buy the MIDI add-on as In App Purchase. Also, Auxy doesn’t support Sync messages (yet), so you won’t be able to have it playing in sync with Logic. But in this case it’s not a problem, since we’re just using Logic to replace Auxy sounds and to record its MIDI output.

The videos are silent, but you can hear the actual final tracks in the Soundcloud player below (again, this was just a quick test, don’t expect real art here!). More on midimux in the next days.
2015 is going to be an exciting year for iPad & desktop DAWs integration…