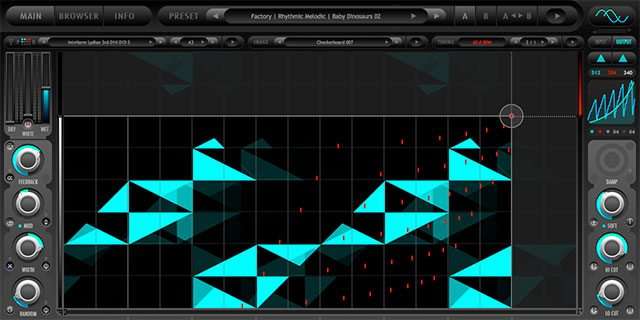 As a non-musician (no theory, good ears), opening Kaleidoscope for the first time was like some old dream come true.
A great big splash of magenta surrounded by eight dials and some drop-down menus. Fantastic. Load up the first preset, turn up the white noise and lock it (so it keeps generating its own sound when preset surfing) and my jaw dropped further.
Preset after preset of astounding diversity, from beautiful, rhythmic soundscapes, to dark textures and on and on… then I started playing synth and drum machine patterns and spoken word through it and for several hours I just couldn’t get enough….

Yeah… It’s a trip…
Straight away I started tweaking patches with sometimes promising results, trying to make Kaleidoscope fit my synthesizer mind. The feedback control works as expected, lengthening the tones with extra resonance, Hi-Cut and Lo Cut filters are nice. Soft acts like another kind of filter, damping harmonics and is tonally different. Then I got to the drop down menus, hundreds of tuning templates and what seems like thousands of image files and then I stopped….

Overwhelmed by its complexity, I was both mesmerized and frustrated by its unpredictability. So I went to the very informative 2CAudio website. The website says Kaleidoscope is:
‘The ultimate sound-design tool and creative effects toy!’
‘A tool for intrepid sonic explorers who seek to help tell humanity’s biggest narratives.’

But what is it actually?
So I read the excellent manual. Essentially, Kaleidoscope (available for AU, VST, and AAX hosts, for Mac and Windows) is a bank of up to 512 pitched resonators, the tuning of which is governed by the selection of a scale preset.
These resonators come in flavours, String, Spring and FIR. The String resonators produce a harmonic series whereas the Spring resonators produce only the fundamental note. Both types come in single and double forms, think piano or twelve string guitars, plus there is a FIR resonator.
You can add extra partials and/or duplicate each resonator several times. Experimenting with these settings in conjunction with the feedback and soft controls, which behave as dampers can dramatically alter the results obtained. External audio and/or self-generated white noise is mixed and input to the resonators, acting as trigger impulses.

Kaleidoscope uses images to define which resonators are triggered and to modulate the gain and pan of each triggered resonator. Each row of pixels, up to 512, represents one resonator at its predefined frequency. The brightness of the pixel equals the volume of the resonator and the colour its pan position. So, black equals no sound and as the brightness increases so does the amplitude.

There are two images to each preset, ‘In’ and ‘Out’, and this is where I was initially confused. The ‘In’ image modulates amplitude and pan position for the audio signal before it triggers the resonator. The ‘Out’ image modulates the signal output of the resonator. Each image has separate timing and so complex rhythms and textures can be obtained easily.

Kaleidoscope is a VST effect but can also generate its own sound using internally generated white noise to trigger the resonators. The white noise can be locked On or Off to permit preset surfing, so switch it on, the button changes colour dependent upon which colour scheme is chosen, and surf dude….

Kaleidoscope in use
Now all this sounds extremely complex and it is, but, having spent some time with Kaleidoscope I have come to think of it as a kind of vocoder. Feed it a drum loop or any source with transients and, depending on tuning and images chosen, a highly resonant rhythm comes out. Feed it more textural sources, or the inbuilt white noise and tones, drones and feedbacks follow. You can even create rhythms out of drones. Sound quality is second to none and a decent reverb inserted after just makes it even more exceptional.

Everything is beautifully laid out. I can’t think 2CAudio could have made this instrument easier to use. The amount of complexity summed into so few controls is nothing short of breathtaking. It takes time to learn but starting from scratch yields instant gratification and a bit of tweaking goes a long way.

There are issues that some people may find annoying. First, you have to set an internal buffer within Kaleidoscope. And you have to set it high unless you have a supercomputer as all this processing takes power. This setting needs to be matched in your DAW and, at 2048 samples in mine, makes graphics laggy so your meters appear behind the sound. The second issue for me is that the rotary controls are glitchy, except for the filters. You can type numbers directly into the rotaries, which helps, but it could rule Kaleidoscope out of the live improvisation toolbox.
I think this is the entry price for such a deep instrument and I don’t think there would be a way around this.

So who is Kaleidoscope for?
Film and game sound designers will love it. It has already been used on the trailer for the official Batman: Arkham Knight game trailer and I’m sure it will find its way into many more games and films. I can see it being used in audio-visual-kinetic installations creating ambient, strange spaces for the public to enter and, of course, electronic musicians should take to it. And me, of course.