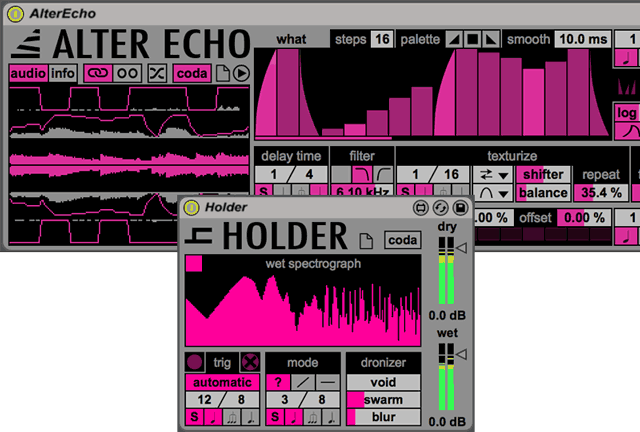 Alter Echo is the most fun I’ve had with a delay in a long time. Holder I like even more, ambient, evolving drones of surprising complexity.

Cons
– The UIs may take a little orientation time

K-Devices have been releasing some really interesting Max For Live devices for some time. There are drum sequencers and samplers, cool effects and the awesome TED function generator, which can also generate cv/gate signals so Live can talk to your modular.

K-Devices latest Max for Live releases, Alter Echo and Holder, are available from Ableton website shop and priced at 29€ and 19€ respectively, or 39€/49$ instead of 48€/68$ buying the bundle (no demo version).
Alter Echo is a highly configurable delay unit and Holder a spectral freeze effect with a twist. Let’s check them out…

First off: this is not your average delay line. What you get is a high-quality stereo delay with step sequenced gate/trigger functions and some extra goodies in the texturize section. The UI is small, to fit the Max For Live model and manages to fit in a lot of control and information. I find these UIs take a little orientation time, but once you get used to it, Alter Echo’s is fast and well laid out. The control section in the middle is split into ‘what’ and ‘when’ step sequencers with the delay tweaks in between:

The ‘what’ sequencer gates the incoming signal to be delayed, the x-axis representing amplitude, the y-axis time.

The number of steps can be set anywhere between 2 and 16. The shapes represent a ramp gate, a rectangle gate and a saw gate, which can be placed at any step. Amplitude curves are easy to set too, crossfading between logarithmic, linear and exponential variants, so these individual gates can be tailored to suit the sound and are represented in the UI. Complex time signatures are straight forward, including dotted and triplets, but my favourites are the random buttons which act upon only the gates and give useable start points very easily:

The centre of the UI offers control over the actual delay, so acts only on the audio that has passed through the ‘what’ section. There are the usual delay time settings, followed by a filter, which offers bypass, low pass and high pass types with a variable cutoff frequency. This filter is applied after the delay rather than in the feedback path, so it filters the first repeat.

The feedback control on the right sets the number of repeats, again as normal.

Where things get more interesting is in the texturize section. Bear with me here as in use this is very intuitive, I found playing with this and then reading the manual – yes RTFM – the best way to understand and predict what is going on. Think of it like a second, nested, delay. The length of this nested segment can be set as normal, using either a synced ratio or millisecond value with dotted and triplet values, but there are two playheads and the second can be offset in time by the shifter control. The amplitude balance is set by the balance control. This section can play forwards, backwards or both, and an amplitude envelope can be set. The repeat control sets the probability that the current segment will be repeated, 100% effectively freezing the texturize section.

Now all this can sound complicated but it is easy to use, K-Devices have got this about right in terms of both complexity and usability.

The ‘when’ step sequencer is a fairly basic stepped gate. You can set the number of steps, which steps are active, the timing of events, use the interpolate function to smooth any clicks and offset the sequencer +/- 50%.

This section acts only upon the output of the delay and texturize sections, finishing off the effect. But there’s more.
Alter Echo can be run in linked or unlinked stereo (would be nice to have copy and paste here). Which means you can have the whole lot twice in unlinked mode. You can flip the input channels, and set it up to carry on repeating after the transport has stopped. The mix section has a neat sidechain compressor plus wet and dry volume controls.

So what does all this add up to? On rhythmic material you can easily get standard synced delays, granular type clicky/grainy noise, flangy/phasey type effects, and all with excellent sound quality. I have had a peek inside and there is a lot of custom code in there, not just standard Max objects, and it is well put together. Most important, it is stable and a lot of fun to use. Here’s a video tutorial… 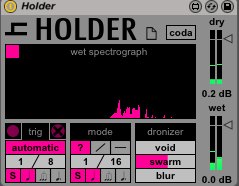 Holder is a Spectral Freeze effect, with a minimal interface and quick access to a wide variety of sounds. Holder translates incoming audio into a video signal and then acts upon it – sort of….

Audio is input and read by the effect when it is triggered. This triggering can occur by itself automatically, with automation or by hand. Automatic triggering avails itself of sync parameters with triplet and dotted note variations, as well as millisecond mode.

Once triggered Holder slices the audio into 8 slices. These can be read in three orders, random, linear (1-8) and what K-Devices call ‘still’, which is the first slice only (would be nice to be able to automate which slice is read here). The transition between slices is controlled by the now familiar timing resolution controls and the audio is then sent to the ‘dronizer’. Guess what that does….

A lot more than create drones, but that is the basic idea. The ‘void’ parameter mutes audio bands, and can generate vocoder like effects easily. The frequency combing can be clearly seen in the spectrograph. The ‘swarm’ parameter modulates amplitude using what K-Devices call ‘video noise’, it sounds good on a variety of sources. Finally, the ‘blur’ function interpolates between slices, I guess smear would be an equal term, it effectively crossfades between them and creates a time-stretched type of sound.

From there its wet and dry volumes and then out into Live again. It doesn’t look like much, but Holder is possibly the easiest to use, most effective – in terms of results – spectral freeze effect I have used. It rewards a bit of care and attention with shifting tones of surprising variety.

Here’s a video overview for Holder as well…

To wrap it all up. I really like these effects. They are both well thought out, well laid out, stable Max For Live devices. Alter Echo is the most fun I’ve had with a delay in a long time. On a simple hi-hat pattern it can introduce seemingly non-repeating variations and fills without having to resort to external modulation. Granular as well as traditional delay effects are easy to create and the sound quality is good. It is not, however, a vintage delay emulation, but a thoroughly modern tool.

Holder I like even more – ambient, evolving drones of surprising complexity and with a clear sound are what it does. It can do odd, dirty spaces too. With some automation this thing becomes a little synthesizer with its own. Results are very dependent upon the input audio, which is a good thing, as it doesn’t just do its own thing no matter what you put in. Last but not least, these aren’t too expensive and as a pack come cheaper.