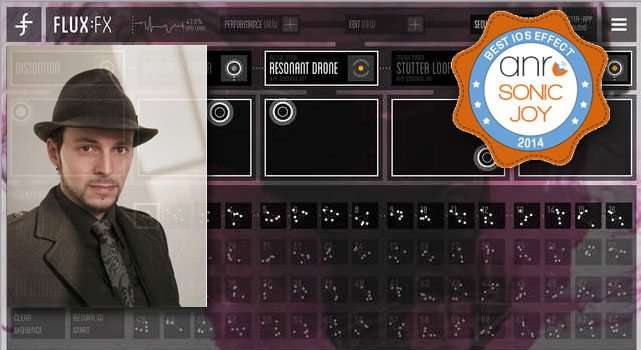 FLUX:FX, a multi-fx app for iPad created by NOIISE (a partnership between the acclaimed musician Adrian Belew + audio specialists Elephantcandy + mobile designers MOBGEN), has been one of the most enjoyable surprises for 2014.
As we wrote in our Sonic Joy awards page, ‘Adrian Belew’s sound-mangling experience + great mobile design = a classy multi-fx app that raises the bar’.
We asked Nick Mueller (Executive Creative Director at MOBGEN and founding partner of NOIISE) to tell us more about FLUX:FX…

I’ve read that it took two years to make FLUX:FX. Can you tell us more about the original concept? What did you feel was (or still is) missing in the iOS audio market?

The original concept came from a discussion with Daniel Rowland and Adrian Belew in a little whisky bar in Amsterdam. Adrian had just finished a fantastic gig for the Amsterdam guitar festival and we were talking about his next project. He was looking for a tech and creative partner for his musical release (this turned into the app FLUX by Belew – music that is never the same twice, which we also worked on), and that progressed to a discussion on the way that mobile technology has changed the way people are both creating and consuming music. So many people listen to music on headphones via their phone, that it makes perfect sense to create a platform to deliver it from there. Similarly, musicians are taking advantage of the computing power and interactive possibilities of mobile devices to make music.
There are some fantastic audio production apps out there like BIAS and Jamup, iMS20, Animoog etc – brilliant apps that can make incredible sounds, but they are essentially replicating or staying very, very close to analog real-world equivalents. Complete with every dial, glowing tube, switch that is or would be on the real thing.
Our idea was to make a creative effects application that was inherently digital, something focussed on the iPad platform and designed specifically for the unique opportunities that it has. By no means are we the only team doing this, with apps like Samplr and CSpectral as examples. The concept was to allow for full touch-screen interactivity, with every element being ‘manipulatable’. We wanted full fidelity effects, not ‘guitar voiced’, and we wanted to be able to push the settings way past what is normally considered sensible.
So essentially the mix was to create something that sounded like a series of pro studio effects that could be played in a performance via certain control options, like XY touchpads and a sequencer. We wanted to make an app that embraced abstract sound design and that allowed users to come up with entirely new tones.

The app features over 30 effects, and up to 5 of them can be used at the same time. Impressive numbers indeed. Were all the algos written from scratch or did you use pre-existing frameworks? How CPU-intensive the whole thing is?

Yes, this was built from scratch, both the coding and the user interface design. Some of the effects share a code base with some of the specialist effect apps that Elephantcandy have produced such as the ultraphaser, level 24 and so on, but we have adjusted quite a bit with this. The philosophy with the effects was to provide modular building blocks that can be chained in creative ways to allow for completely new sounds. Some are pretty familiar such as overdrive and chorus, others a bit more esoteric such as resonant drone or reverse loop, but all can be used in creative and artistic ways for sound design. You can also use the same effect block 5 times if you wish!
This is not a lightweight app, and in a way the decision was there from the start to not compromise on anything in terms of audio quality or control possibilities. If you think that there are five stereo studio effects (six including the limiter), with multiple parameters being automated in 16th note steps or real time via the XY, then you can expect the hardware to be pushed. That being said, you can still have a lot of fun with this app on an ipad2, but don’t expect to run five cavern reverbs in a row at minimum latency!
Then you add the inter-app audio/audiobus platforms, and whatever other apps you might be running. We have included all the fruit because this is expected these days, and FLUX:FX certainly works well in these scenarios, but really the philosophy of the app from our perspective was for it to be a unique standalone effects processor, or as another chain alongside a hardware rig, not as simply a ‘plugin’.

Many VST/AU plug-in developers are staying away from the iOS platform, probably afraid of the platform’s limitations (I’m especially thinking lush reverbs, etc.). Whatdo you think of that?

Actually we don’t see it as a question of iOS vs desktop platforms, we see them as different beasts, each with particular opportunities. For example, manipulating effects in real time is kind of sucky using a mouse, but awesome on a touchscreen mobile device. Conversely, a full-featured DAW is pretty damn fiddly on an iPad or iPhone.
With regards to the reverb example, in a recording context – it is a particularly intensive effect, and for that, desktops will usually win. Imagine you are mixing your track in the studio and you need a certain reverb, nobody is going to plug an iPad into their studio just to access a mobile version of a VST verb plugin. But that is thinking about it the wrong way… as a replacement or alternative to the desktop. Instead, we should look at what else the iPad offers. For example, portability and a built-in microphone. So imagine you have a metal trash can, you could put your iPad inside, tap the outside and record the impulse into a convolution verb app, and in about 10 seconds you have sampled the space. It’s not super hi-fi, but it could result in extremely creative sounds. With a desktop, you need a whole series of equipment and actions to get the same result. Developers really need to be thinking this way about making the most of the benefits of each platform.

Using FLUX:FX I appreciate the work you’ve done in making a truly mobile app. Unfortunately, many mobile developers seem to forget they’re making apps for a touch screen device. Can you share with us your design philosophy?

There are really a lot of apps which are either direct ports from desktop, or simply duplicates of the hardware versions – in a fact it seems the norm to design music apps this way. Thing is, this is invariably not the most efficient, functional or intuitive way of laying out the app on a touchscreen device, and we get lumped with interfaces that are packed with hundreds of tiny dials and switches in one area, and then have a large area of blank space on the screen because “that is how it looks on the real one”. Part of this comes from the strange fact that musicians are actually a pretty conservative bunch – so if they can’t get actual glowing 12AX7s, they at least want a picture of a glowing tube on their touchscreen! To me this is pretty ridiculous, and we need to remember as designers that the users are touching a piece of glass which has zero tactile relationship to a dial or some old tolex. We have the opportunity to create original interfaces for these apps, so lets go for it.
So we began with the user experience: the idea of getting the most efficient use of screen real-estate and the most intuitive workflow, the easiest editing etc, and then everything else flowed from there. We tested the interface, adjusted some things and tested again until we nailed the usability. The way the app LOOKS is entirely secondary to the way it WORKS. Of course we want it to look sexy too, but if you can’t use it easily then what is the point. We are certainly not the only app devs with this kind of philosophy, but I am extremely happy that people are recognising the efforts we put into the interface.

FLUX:FX looks like a very flexible ‘sonic weapon’. In your experience, what kind of source material really stands out with it?

Well, pretty much everything. We have obviously put the requisite guitars and basses through it [and of course Adrian is using the app live] and they work a treat, but because it is completely full frequency and full stereo pathway it sounds fantastic on vocals, violin, synths, beats and so on. In fact, the only time it doesn’t really work is if you are looking for a creamy Marshall lead guitar sound… this isn’t the right place for it. FLUX:FX really stands out when you are have a great clean signal that you want to respect with some beautiful delays and modulations, or completely disrespect with sequenced, bitcrushed and glitched resonators.
We visited this awesome studio in Utrecht called Sonar Traffic that has basically every analog synth under the sun, and FLUX:FX played so perfectly well in a chain with a giant Eurorack modular system.

Regarding the price point, I’ve read you writing something like “we want users to have a full package right out of the box, and not just a reduced version that forces them to buy add-ons later”. While personally I love this approach, it looks like it’s not always been sustainable (many apps have been abandoned or are not properly supported anymore, etc.)…

Yes it is a risk from a business perspective, but we don’t want to play games with people. If they buy the app, they should get it, the same as if you buy a good pro AU or VST plugin for your DAW – why should the iPad platform be different from that? Now that is not to say we will not have in-app purchases in the future when we introduce new features, but it was important to us that the original concept of the app was consistent for everyone. We think that the app market has somewhat undervalued itself, so the trend towards slightly higher prices will definitely help sustain product development and help the push towards making this a legitimate professional platform.

I’m just curious, what’s the idea behind the visualizer featured in the app?

The Delaunay visualiser is something that we created as it really appealed to me thematically. It is representing the transition from pure analogue ‘fluid’ into authentic digital vectors… yeah it can be a bit pretentious in explanation but it does move us further away from the fake cables and amp grills that are so common in music apps. We will probably offer some more visual options in the future to give users more customization possibilities.

Thanks for sharing  your thoughts with our readers! We’re definitely looking forward to hearing more from NOISEE and FLUX:FX…

Thanks Fab. I appreciate the chance to ramble and rant a bit! We are fully committed to supporting this app and continuing development on the FLUX:FX platform, so we are happy with the support we are receiving from the community so far.