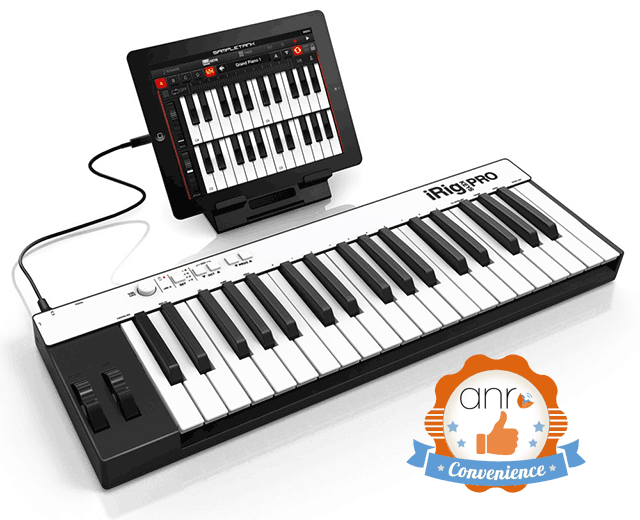 Its size, price, weight, full-sized keys, lack of external power adaptor and easy connection make it my new favorite iPad companion and a terribly convenient item for any iOS/Mac/PC setup.

I have a few MIDI keyboard controllers lying around here, but so far none of them has proven to be an ideal companion for my iPad. Some have an external power adapter, some are too heavy to carry around, and all of them need the extra Apple USB adapter (so small that is easily forgotten when packing my stuff) or an extra interface. At the same time, I’ve never been a fan of those mini-keys that you find on lots of controllers nowadays.
This is why, for some time, I have had my eyes on the IK Multimedia iRig Pro Keys. In these past few weeks I’ve finally been able to take it for a spin.

Convenient features
iRig Pro Keys has 37 velocity-sensitive full-sized keys (a 3 full octaves range plus one note), modulation and pitch bend wheels, Volume/Data knob (assignable), Octave/Program Up/Down back-lit, soft-touch buttons, and the handy Set button that lets you save and recall 4 different customized setups (i.e. different velocity curves for different instruments, etc.).
The unit is Core MIDI (iOS) and USB class compliant (Mac/PC), which makes it truly universal and easy to use right out of the box. It comes with Lightning, 30 pin, and USB cables, and it’s powered from the iOS device or Mac/PC USB. Plug and play, literally.

In use
Thank to its plastic case, the keyboard is light (1.59kg/56.09oz), but still solid and reliable enough to be used on stage. The action feels lighter than my good old Yamaha MIDI CBX controller but definitely pleasant to the touch. It’s perfect for organs, synths or Wurlitzer, but not ideal for acoustic piano or Rhodes emulations. When I really feel the need of a piano-style keyboard I can always plug my 88 keys controller.
Sometimes I wish the iRig Keys Pro had 49 keys instead of 37, but I can still easily play two handed parts on it (whereas on those tiny 25 keys controllers it’s mission impossible!). After all, 49 keys would have also made the unit way less portable and light than it is. 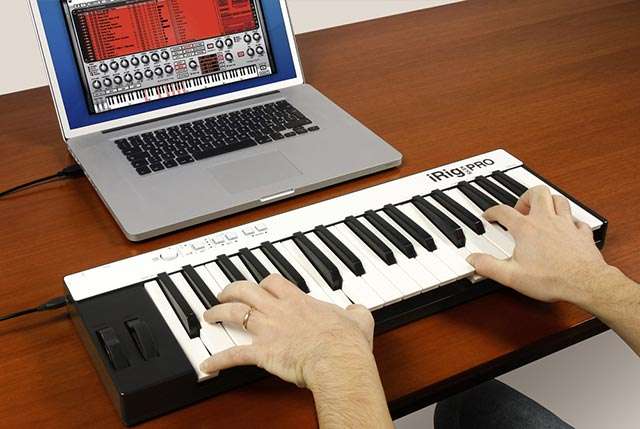 The price point ($149/120€ approx.) is, undeniably, another attractive feature. True, we’re talking about a simple unit (no display, aftertouch, extra knobs, pads, etc.), but it’s one with an excellent compromise between all the factors I’ve mentioned. After all, if I think of other more expensive controllers I’ve used in the past, I barely touched some of their fancier features. Do you need to change the MIDI channel? Just press a few keys and you’re done. Would it be better with a display? Well, it would be nicer, but I had no problems doing without it during these weeks spent with the iRig Keys Pro.
What could be improved? A longer Lighning cable and a few extra knobs (that could be assigned to the main parameters of soft synths) would be the icing on the cake.

A gift option: iRig Keys Pro & Sampletank 3 bundle
The Christmas holiday is over, but you know there’s always a birthday or a gift to buy around the corner. Well, in that case I would have a look at IK Multimedia’s bundles. The one that caught my attention puts together iRig Keys Pro & Sampletank 3.
For $249/199€ approx. it’s really a great value, especially for someone just starting to build a Mac/Pc/iOS based music setup. Besides the above-mentioned keyboard, you also get the latest version of the classic IK Multimedia sample player for Mac and PC. With over 33 GB of included sounds it’s a solid (and varied) base to start making music right away.
Sampletank (while greatly improved from its previous versions) is not nearly as powerful (nor open) as other sample platforms like Kontakt, but that’s also what makes it more immediate for less advanced users or for those that don’t need more creative/experimental features. By the way, Sampletank seems to be very popular in the hip hop community, so if that’s your thing, this bundle could be honey for your ears!

Conclusion
After using iRig Keys Pro for a few days, I somehow regretted not getting it earlier. Its size, price, weight, full-sized keys, lack of external power adaptor and easy connection make it my new favorite iPad companion and a terribly convenient item for any iOS/Mac/PC setup. Hence our ANR Convenience Award! You may also consider the iRig Keys Pro & Sampletank 3 offer, a true plug, install and play bundle!