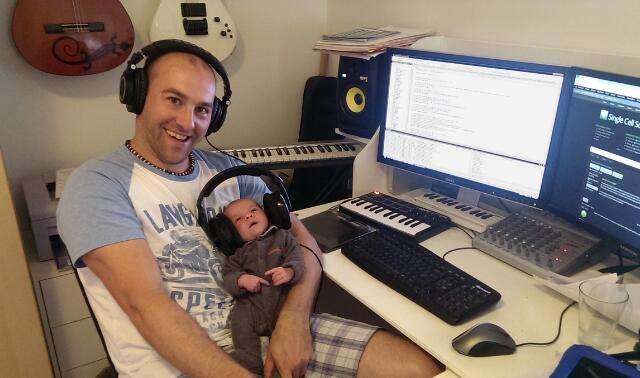 KORG volca sample (I wonder why the lowercase…), the latest member of the popular volca sound boxes family, is a fun sample sequencer that generated lots of interest when it was announced, a few months ago. Checking out its features though, many users were disappointed reading that the only way to import samples into volca sample was through an iOS app.

KORG recognized this wasn’t exactly a wise choice, and decided to release and “open” the volca sample SDK. Power to the people, or better, the hackers!
Rej Poirier, the developer behind Single Cell Software and the über-classic Caustic (one of the most popular music apps on Android, and available also on iOS, OS X and Windows), decided to take up the challenge and… ta-da…a couple of days ago he released a free multi-platform volca sample editor (for Android, iOS, Windows, OS X and Linux) that will definitely make the KORG volca sample more appealing to a wider audience. The Android version and the desktop ones are already available, the iOS build has been submitted and is still waiting for Apple’s review.

We asked Rej a few questions about this new adventure…

What made you decide to start working on a volca sample editor?

I had missed the original announcement that the companion app would be iOS-only, but when I read about the SDK being released and put all the information together, that got me pretty stoked. I don’t know why really, it was like a call to arms: “What? They’re not supporting Android?.. oh but they’re giving us the tools… I’ll DO IT!”
I started thinking about how I could just take Caustic’s WAV editor, wrap it up in a list front-end and plug in their syro stream library to generate output through my audio pipeline. I then thought “well I’ve already got Caustic running multi-platform, I should really try and release this as multi-platform too, even iOS”.

Did you actually have a chance to try the volca sample?

After I decided I’d make the app, I called around my local shops and was told the volca sample wouldn’t be available until early-mid January 2015 (this is in Australia). I had read reports of people in the UK who already had them so I put out a call for testers on a few forums. I got no serious replies so I set out to write it “blind” and meanwhile ordered one from Japan on eBay, which arrived quickly. I’ve never actually owned a piece of music-making hardware before so it was fun to touch physical buttons and dials and hear it. But I’m a programmer at heart and had an app to publish so the moment I figured out how to play samples, I erased everything and plugged in my editor. I tested everything, found one small bug when transferring multiple samples across, fixed that and released. The whole process from concept to release only took 4 or 5 days because I re-used so much code, and really, half of that was spent making icons and taking screenshots at various resolutions for Google Play and the App Store.

What’s your opinion on the KORG volca sample SDK? Is there something you’d like them to add/change, and have you been in touch with them while developing your editor (or after its release)?

Well, the SDK itself is pretty simple and fairly well documented. It’s also written in C so it’s highly portable. (all platforms offer support for native code). I really wish there was a way to query things from the device (like what’s in memory, error codes, etc) but I understand that would be very difficult when using a simple headphone output. Apart from entering bugs, KORG hasn’t really set up any way to contact them about the SDK so we’re on our own. That’s fine for something this simple and they probably don’t want to support every indie Android dev. I’ve not heard from them since releasing my app either.

Do you plan to add more features?

I don’t know. This was a bit of an experiment for me, I wanted to see what the demand was for something like this. It’s still early though and most people who want one can’t get it yet, but hopefully this will convince those without iOS devices that it’s safe to buy one now, that someone’s got their back. As far as improving the app, I’ll probably bring over any updates to Caustic’s WAV editor but business-wise it doesn’t make sense to spend too much time on something I’m giving away.

I think it’s up to each developer to evaluate whether a platform is viable or not and I’m sure those who have not come over have their reasons. I do this by myself with little financial risk so I’ve been able to stay nimble and adapt. I can’t really say it’s been a pain to develop for Android though – I think some of the arguments parroted against Android are outdated or exaggerated – and the support I’ve received from users certainly makes it really rewarding.
There have very interesting strides in Android audio over the past year from with more and more manufacturers starting to show interest in becoming “the music maker’s Android device”. This competition means better audio SDKs and easier ways for devs to get their apps working with low-latency APIs and other advances. It’s just getting better and I think we’ll keep seeing more apps coming over.

Thanks for your answer Rej, as well as for the cute picture and the accompanying note (“Sorry if it’s not hip, but I like that it shows my reality: I’m a stay-at-home dad, I make apps part-time and I really enjoy it”).
The volca sample editor is free, but you can support Rej buying Caustic using the links below.