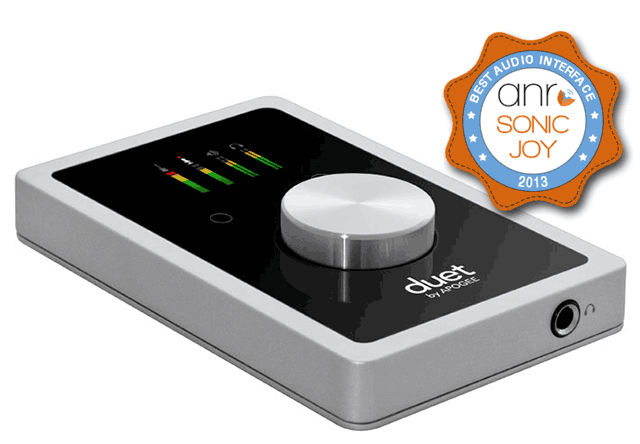 Apogee DUET looks and performs great. If you’re looking for a professional audio interface for your Mac and iPad, and other more affordable (but limited) options don’t cut it, this is a high quality and reliable choice that will considerably improve your setup.

After our Apogee One review we published last year, we thought it was finally the time to pay a visit to its bigger brother (or sister?), the Apogee DUET for iPad and Mac. DUET is a 2 analog inputs, 4 analog outputs audio interface, with a USB MIDI input. The breakout cable includes 2 combination mic/instrument connectors (XLR and 1/4” built into a single connector, that allows you to connect microphones, guitars and line-level signals) and 2 balanced 1/4” connectors for speakers. The other 2 analog outputs come from the separate (and independently controlled) 1/4” stereo headphone output.

Not surprisingly, given the product name, the Apogee DUET basically doubles the size and the connection options of its smaller brother (losing the embedded microphone, but gaining a handy MIDI connector). While the two units share a similar concept and the attention to detail and quality, the DUET definitely raises the bar in terms of features and design. The higher quality converters, the refined aluminum chassis, the hi-res display, the controller knob, the convenient two configurable “touchpads” (that allow you to perform functions like “Mute Outputs”, “Dim Outputs”, “Sum to Mono”, etc. with one tap) clearly bring the unit to a new level. 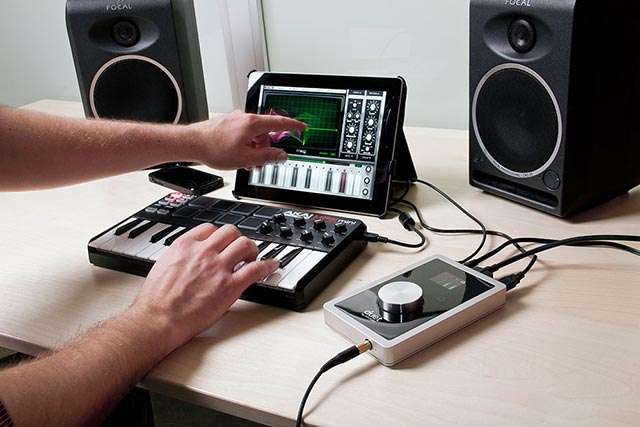 As for the integration with the iPad, what we wrote about ONE is still valid here: the DUET allows you to charge the iPad while in use (in this case you can only use the unit’s power adapter, there’s no internal battery – but frankly even on the ONE it doesn’t last long anyway). Road warriors can also use an external battery pack, but make sure to double check the power requirement specs first. I’ve found the MIDI connector a welcome addition. It’s a simple MIDI IN, but it helps make the most of those cool synth apps you have on the iPad. You’ll need a USB MIDI keyboard (or controller) though, the good old MIDI standard plugs won’t work in this case. 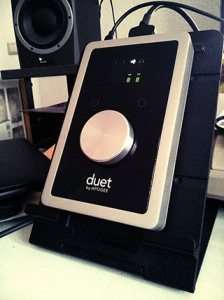 At this point you may be wondering, does the DUET sound better than ONE? Well, in a word, yes. Two key factors here: the DAC is a considerable improvement, given that we’re talking of a ESS Sabre32 (up to 192 kHz), the same chip used in the hi-end Apogee models, Quartet and Symphony. I may blabber about its 32 bit engine and its jitter elimination, but I’ll cut straight to the chase: the DUET has a wonderfully balanced and pristine sound, with a detailed stereo image. Just play some high-quality music from your music library and you’ll notice the difference with cheaper audio interfaces. My Dynaudio speakers approve, and my ears as well.
Also, the preamps are more ‘generous’ than the ones found on ONE, offering up to 75dB of gain and covering most if not all microphone needs, ribbons included.

A Maestro Performance
As we’ve seen with ONE, on both the iPad and the Mac, all configurations are achieved through the Maestro application. Its one window design makes it very easy to use, even if you’ve never used an Apogee product before.
Maestro won’t give you all the complex routing possibilities that programs like RME’s Totalmix can offer, but given we’re talking of a 2 input, 4 output unit, you’ll be perfectly covered (and it’ll spare you some headache).
Latency is not an issue. On both the iPad and the Mac (Mini) I had no problem recording audio and/or instrument tracks in Logic or Garageband. Don’t be fooled by the fact the DUET is ‘only’ a USB2 device. As explained by Apogee, the bandwidth offered by USB2 is more than enough to cover the DUET’s input and output needs.
By the way, if you want to use the Low Latency Mixer in Maestro, here’s a helpful video tutorial.

Apogee DUET looks and performs great. I’ve appreciated its sleek design and seamless integration into both iOS and Mac-based setups. I found it a perfect tool for a project or a small studio, while still small enough to be easily taken on the road for some quality mobile recording. It may be more expensive than other 2-inputs 4-outputs audio interfaces, but you get what you pay for. Construction, design, converters, they all scream quality.
That said, I’m not a fan of breakout cables and I wish DUET would come with an extension cable or that optional Apogee breakout box (you can order it from Amazon U.S  – Amazon Germany –  Amazon UK ). Oh well, I guess you can’t have everything!
If you’re looking for a professional audio interface for your Mac and iPad, and other more affordable (but limited) options don’t cut it, I’d definitely give Apogee DUET a try.

Apogee DUET on Amazon US