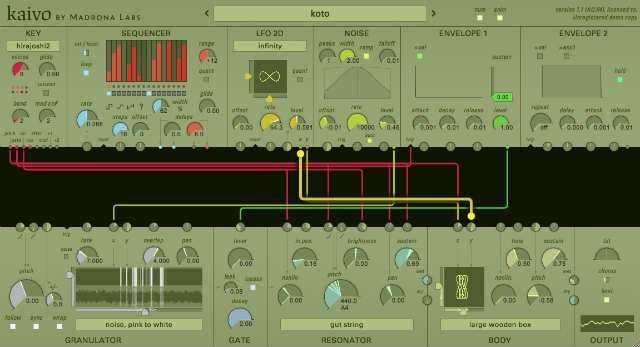 We reviewed the brilliant Aalto by Madrona labs a couple years ago.

Their latest synth offering Kaivo blends the two fairly unusual synthesis techniques of physical modeling and granular synthesis together, and plops them in the semi modular structure that Aalto fans will be familiar with. This places the synth squarely in the no-competitors realm: I can’t think of a synth that combines these synthesis techniques into one package. Izotope’s Iris, and Camel Audio’s Alchemy come fairly close, perhaps.

If you’ve ever experienced Aalto, you’ll recognise the layout of Kaivo immediately. Semi modular fun with all those colorful patch chords. Kaivo has a vector based UI – so you can resize the interface to whatever fits your screen. It’s quite a busy interface, so the larger you can get it, the better!

The three modules along the bottom of the window are the main sound creating modules.

The granulator module acts as the ‘oscillator’, or agitator of the sound being created. Granulation is the manipulation of samples into varying amounts of frequencies that can be time stretched and compressed. In the case of Kaivo, the granulator is a sample table, of up to 4 samples, (there are preset samples, but with update 1.1 it is now possible to load your own) that are most usefully accessed via the ‘2D lfo’. The XY placing of the LFO will affect where the loaded sounds are sampled, depending on how you cable it. It’s not just a regular LFO either – there are 7 shapes or waves available to modulate the samples. Of course, there are other ways to access the sample table, via the other modulation options: more of which later.

The next two modules, the resonator and the body, are the two physical modeling elements of Kaivo. The resonator is modeling the various physical elements of an instrument that vibrate, and begin the sound – strings, bells, and springs. You can add as little or as much of the resonant qualities of these models as you’d like using the wet control.

The BODY module is the resonating space that contains the sound. An organic reverb of sorts. As of this review, there are 4 resonant models – two boxes, a metal plate and a drum. Again, the amount can be added to the sound with the use of the wet knob.

Subtle uses of these two resonant modules can really give lovely organic harmonic overtones to whatever sound you run through it. There are options to raise and lower the tone and brightness of the resonances, alter the sustain and pan also. I would love to see these two modules further developed in terms of available models. I think more are promised for free in future updates.

Kaivo would be an interesting synth if you left it there, but of course there are the modulation options along the top third of the synth that give you infinitely more sound mangling routes. The modules along the bottom all have parameters that are linkable to the modulation modules via a virtual patch cabling window that occupies the middle third of the GUI. It’s very intuitive, so I won’t explain the system in much detail: Drag your cable from the modulation source to the parameter you wish to modulate. decide how much modulation you wish to provide by altering the level knob that is present alongside most of the patch points. Listen to crazy sounds. The modulation options are extremely similar to Aalto: A 16 step sequencer per voice, the aforementioned 2d LFO with 7 different ‘waveforms’, a noise module, and 2 envelopes. I wish that the filter module of Aalto was in Kaivo, but I guess there’s a limited amount of space. You can change the brightness of the resonant models, and there is an EQ tilt knob, but there were times when I was just wanting for something to knock a band of frequencies down a bit. There is a speaker-saving limiter for when certain frequencies get resonated to screeching levels. USE the limiter when experimenting!

Here’s a demo of pad sounds – the types of sounds I had the most fun creating in Kaivo!

Conclusion
Kaivo is by far the most CPU intensive synth I own. U-he’s Diva previously held that title, but has been swept off it’s feet by this hungry monster. I’ve come to terms with the fact that my old Mac Pro needs replacing – this synth being the latest in a list that the old beast just can’t really cope with. Many of the presets had the CPU monitor driven past 100% on the press of one note. On my brand new Macbook air it fared a lot better, but was still power hungry. However, don’t let that put you off. As with all modular type synths – this warrants time tinkering with. If you put in the time, delight will be guaranteed with the sounds you get out of it. The presets are ok – but from the time I spent delving deep into the modulation options, and playing with the samples I loaded up, I was richly rewarded with unusual, lovely organic and harmonically rich sounds. I imagine if you had this synced up to the creators beautiful hardware creation – Soundplane, or similar instrument, you could really get the most out of Kaivo.

…This places the synth squarely in the no-competitors realm: I can’t think of a synth that combines these synthesis techniques into one package…