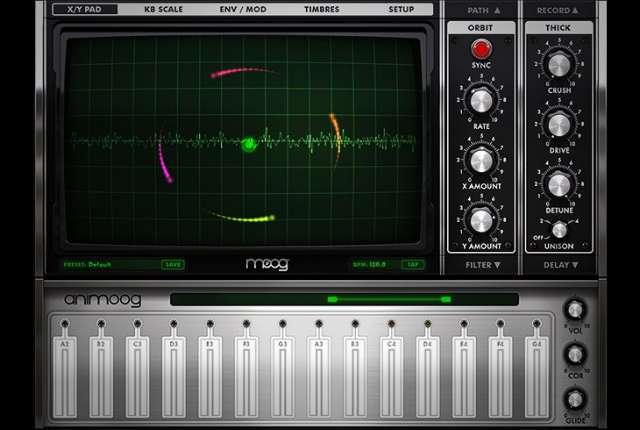 Animoog is one of my favorite apps when it comes to creativity.

Cons
– I can’t think of any, really

Animoog has been around for a couple of years now. We could have featured it in our iPad Music Making Apps: Classic For A Reason series, but we thought it deserved its own spotlight. Animoog somewhat of a godfather of serious synth apps, partly because of the weight that the name Moog carries, but also from the favorable reviews the synth has garnered over its short life span. Its award winning and highly-regarded synth engine has recently been introduced into Moog hardware (Check out the Theremini at NAMM 2014)

Animoog is a visual wave table synth. Each sound can contain up to 8 wave samples, that are layered one on top of the other in the XY main window of the synth. You can drag your finger through the eight layers, or record the movement of your finger to automatically move wherever through the layers, to create some movement in the sound. There’s a weird touch-plate style keyboard at the bottom of the window that you can play at the same time as dragging your fingers through the different waveforms. You can slide your finger up and down the keyboard, control the amount of glide and portamento on the note, and how centrally you hit the pitch of each note.

Once you have the sound you’re looking for, you can hit the record button, and the app will record your finger movements on the wavetable as you play. Every time you play a note thereafter, the timbre of the sound will be changed by the pattern you traced on the XY window. It will repeat it for each note you play.

On top of this already fun experience, there are a bunch of fx and modulations to the side of the XY window that have the weight of Moog’s sonic prowess behind it – a delicious sounding filter, delay, 2 distortion types, and modulation elements that affect the movement of the sound through the 8 wave layers.

To the top of the window, you can move from the main XY window to other parameter windows. The K/B window lets you choose what scale you want the keyboard at the bottom to represent, and you can choose which notes are in and out of the keyboard. There is an Env/Mod page that lets you assign LFO’s to several different sources, and envelope the sound you’ve created.

The timbres window enables you to select a waveform for each of the 8 layers in the XY window. There are A LOT of waveforms to pick from.

The setup window enables links with the outside musical world – Animoog supports iOS core midi, so you can attach a midi controller and play away. You can also record and loop sounds you create with a digital 4 track, audio copy and paste to other apps if you wish.

Here’s a sweet performance using Animoog in a setup:

The team at Moog definitely wanted to take advantage of the multitouch possibilities of the iPad/iPhone. The weird keyboard is for me the most inspiring part of Animoog, with it’s awesome glide, portamento and polyphonic modulation capabilities. So with as many fingers as you can muster, you can affect the tone and timbre of each separate note. you can control glide and pitch with each finger, and as you move up and down the key you can control timbre and whatever other effect is routed to the finger position on the keyboard. Therefore each note can be changing pitch and timbre simultaneously. This is very inspirational to me, and obviously stands out from a regular keyboard synth.

The Animoog is one of my favorite apps when it comes to creativity. The sound quality it goes without saying is excellent. But the way it stands apart from me is the excellent way Moog has utilized the touch screen capabilities of the iPad to enable instant creativity in a different way from normal. I use it as an instrument to turn to when I need some fresh inspiration, and the more typical method I use seems tired. Instead of turning knobs or clicking a mouse you have the sweeps and flourishes of your fingers over the large xy window, and instead of the rigid boundaries of keys, you can control portamento and glide directly by sliding between notes. For an iPad app, it’s pricey, running at $30 or thereabouts. But this is a simple yet powerful soft synth, which would probably have cost a lot more had Moog released it for desktop computers. I think it’s a bargain for what you’re getting.

P.s: once you’ve checked all the presets, make sure to have a look at the in-app store. You’ll find some cool expansion packs, featuring new presets and timbres that can expand your Animoog’s palette. Tip: if you are into more experimental sounds, check out Richard Devine’s pack, you won’t regret it!