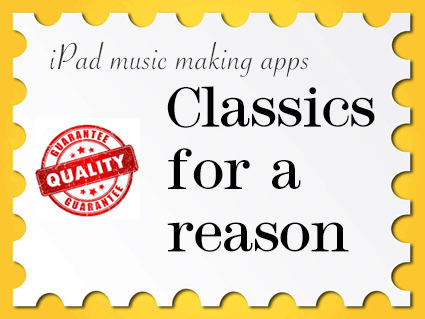 When talking of iPad music making apps, the focus is often on the latest and greatest, but doing so we often forget about those apps released time ago, as if they were not relevant anymore. Unlike our usual in-depth articles/reviews, in this Classics For a Reason series we’ll try to offer a quick overview of “classic” music making apps, pointing out why they represent a worthwhile addition to the sonic palette of many musicians. For those new to the iDevices, these articles may help answering the usual question “what the are the must-have apps that I should install on my iPad”? For those with (too) many music apps, it could be a chance to revisit some of the good old ones. Let’s check Korg iMS-20, iSequence and Auria.

Korg iMS-20
A veteran indeed, released at the end of 2010, but still totally relevant. Korg has put lots of effort in making this a rich production tool. Featuring an emulation of the MS-20 synth, an analog-style sequencer (based on the Korg SQ-10), a drum machine, song/pattern modes, Kaoss Pad technology, a mixer with FX, the iMS-20 not only provides many hours of fun, but can be also a valid creative tool – on the road and studio musicians (yes, you can export patterns and songs) can both benefit of its quite intuitive interface and powerful sounds.
Like a good red wine, iMS-20 got better with the time, adding features (background audio, Audiobus, Virtual Midi, etc.) and fixing the inevitable bugs. The problem with an analog-style visual interface is that knobs and buttons are quite tiny and not easy to operate, but many users would probably be disappointed in seeing a modern looking MS-20.
Also, the MIDI implementation could be improved, but despite these shortcomings, the iMS is a fantastic tool, especially for electronic/beat-oriented musicians and noise-makers. While it’s definitely possible to use the app just with the built-in virtual keyboard, to get better results we recommend connecting an external MIDI keyboard. Let’s face it, it’s not always fun to play a synth just tapping on a screen.

At ANR we loved the first MS-20 software emulation released several years ago as a DAW plugin (remember the Legacy Collection?). With the iMS-20, Korg merged its circuit-emulation technique with an extra array of new-old sound toys. Its vintage-style sounds, the impressive list of features and a fair price (currently approx. $20/18€) definitely make the iMS-20 one of our iPad music making classics!

iSequence
Another 2010 release, this time by BeepStreet. iSequence is an all-in-one tool, featuring an 8-track sequencer, lots of instruments and a mixer with DSP effects. A high number of good quality, something-for-everyone sounds (you can add more via affordable in-app purchases), a flexible sequencer, a sampler mode that allows you to import WAV or AIFF samples, and a quite intuitive workflow make iSequence a perfect app to start making music with the iPad. Its layout makes good use of the screen estate and it’s very easy on the eyes (some may say it’s not ‘exciting’, but we’d rather have this than an eye-candy). Suitable to a more general audience than the iMS-20, it can be a solid sketch pad for beats and sequences. Current price approx. $10/9€.

Auria
If music is more than just a hobby and you’re missing your DAW when using your new iPad, well, then Auria is an app to put on your list. Released in 2012 by Wavemachine (well known for its Drumagog), Auria is a professional level DAW for iPad, with an tremendous list of features (like 24-bit/96kHz recording, up to 24 inputs and 48 tracks, support for VST plug-ins, full delay compensation, time stretching, support for Dropbox, Soundcloud, AAF, and MP3, etc.).
It basically allows you to record, mix and master your music in the same way you’re used with traditional DAWs and it boasts an analog-style interface that will look familiar even if you’re never used a computer to record and mix so far (anyone?).
Wavemachine partnered with PSPAudioware to offer Auria’s users a quality channel strip that features Expander, Multiband EQ and Compressor, and a MasterStrip featuring BussPressor, EQ and Mastering Limiter. These plugs, together with the in-built StereoDelay and StereoChorus, cover all the basic needs, so you can start mixing right away. Sound quality-wise, if you’ve used PSP stuff in the past, you’ll already know you won’t be disappointed. Third party iOS effect plugins are supported as well, and they are also available as in-app purchase. Last but not least (talking of plugins), Auria throws in a convolution reverb plugin with an included IR library. Not bad, ah?

As mentioned for the iMS-20, here at ANR we’re not big fans (to put it mildly) of analog-looking visual interfaces, and we still think an iOS DAW should try to “think different”. While Auria doesn’t (see the mixer, knobs, and other elements), we definitely love its touch-based waveform editing, that makes good use of the tactile possibilities offered by a tablet.
Coupled with a good USB soundcard, Auria can become an extraordinary tool for your “mobile sessions”. Sure, you’ll have to face the iPad’s Ram limitation and some stability issues (especially if using other apps at the same time, try not to), but who would have imagined until 2 years ago to have a pro-level DAW running on a 400 grams device?
Auria comes in two versions, normal and LE (with a lower track count and some features disabled), and they are currently on sale for €45/$49 and €21/$24. If those twenty extra bucks are not an issue, we recommend getting the full version, you won’t regret it.