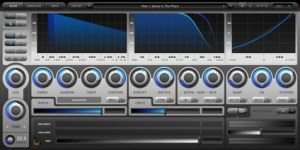 B2 is the 3rd spatial processing plugin from 2CAudio, after Breeze and Aether, both of which went down a treat worldwide, winning editors award choices, nominations in huge software roundup competitions, and competing easily with some of the other larger companies out there in terms of quality and flexibility.

B2 is an algorithmic reverb unit, with exceptional sound quality, and with a plethora of modular processing options on top of the quality sound.

This is how 2C puts it: “B2 is a modular dual-engine, non-linear spatial processor featuring built-in harmonic distortion and flexible dynamics. It is our most advanced plug-in to date and is capable of both mind-bending creative effects that defy classification as well as stunningly lush reverbs. Its modular design enables an almost infinite variety of sonic possibilities.”

One of the immediately satisfying qualities of this plugin is that you can choose to dive deep, and create your reverb from the foundations up, or just click straight through to the browser section, where you’ll encounter just under 700 factory presets for quality reverbs, from the more standard rooms, plates and useful standard recording treatments, to sound design-oriented preset categories with titles like Sci-fi, Mystical and granular. They are all laid out neatly in a preset browser that is categorised – so you can quickly get to the particular style of effect you want.

B2 is essentially two reverb engines in one – and they can be configured completely independently; as an early/late reflection model that’s used in their other reverb plugins, or you can use one reverb to affect the signal of the next reverb, which creates some extremely interesting results. Using some of the other dynamics tools included in the plugin, you can crossfade between the two engines, wandering between two different spaces!

The main display graphically shows the characteristic information about the reverb you’re creating – showing early and late reflection times and shapes. Buttons to the side switch the display between the two reverb engines, in bright blue and bright green. You can toggle to views of the EQ and damping you’re using, and any dynamics processing that you’re using. The view can be changed to show the individual delay lines that are being used, their shape, size, width, volume, and delay time of both reverb engines. Again delineated by bright blue and green. In this section there are also buttons to link the 2 engines together, so every parameter knob you move is affecting both engines. You can also switch engines, turn one or the other off, and go to the next or previous plugin.

These are the main controls for each engine, and they are relevant to both. As well as the usual parameters you would expect from a reverb plugin – Pre-delay, time, size (manual refers to the room sizes), Density, and diffusion. You can disable the feedback and reverb itself, which essentially transforms the plugin from straight reverb to more multi-FX unit, by using the EQ, compressor, pre delay, etc. There are many different uses for this – for example, if you disable the feedback and make the reverb size very small, it has a stereo widening effect, but doesn’t add reverb or ambience to the sound.

This is a non-linear plugin. Great effort has been made to ensure that there are sonic inconsistencies, varying results, and other generally non-linear attributes to the treatment of the sound. This gives the sound the character that we love – the non perfect sound.

The linearality or non, is controlled at the main display using the Range, Random, contour and curve controls. These define the distribution of the sound into the space that you create. You can start from scratch to create the space that you want, with the reflective characteristics you want, how big it is, how random the delay lines are, and how the amplitude curve is shaped. Essentially, the spaces you can create are limitless.

Another way that 2C have really upped the standard is using their spectral modulation algorithm. Claiming that no space ever returns the same impulse response, as nature is always affecting the space, even of rooms (think, temperature, occupancy, humidity etc), they’ve tweaked their algorithm so that the ‘impulse response’ that is imitated is always shifting very slightly and imperceptibly to the ear, but simulating more closely the organic and natural response you would get in the real world. This is always present, and is not controllable, being at the heart of the plugin. Of course, even this element of the B2 is still modd-able, with a user definable LFO that can affect the reverb tails by altering the pitch and shift microtonally, which can sound anywhere from natural modulations to much more lush thick chorussy sounding reverbs.

There is a built in dynamics processing section, containing various tools useful for shaping and placing the reverb. There’s a gate, for those wishing to 80’s up their drumkits; compression, ducking, expansion, transient processing that can be applied pretty much anywhere in the chain (including side chain!) to really allow some creative manipulation of the reverb. The damping control gently changes the EQ of the reverb over time, so as time goes by, the frequency of the tail lowers, and sounds damped. there are High Low and Band pass filters to use, to enable specific frequency bands to be damped. There’s an analog style distortion with many different types that can be added to the sound. There’s Cross and Width controls, which give you spatial options – you can cross the signal from one channel to the other, or you can narrow or widen the stereo width of the output signal.

This adjusts the amount that you want to crossfade signals between each other. When it’s set to max, each signal is output serially. inbetween, the outputs are crossfaded. Another magical and mysterious control that affects the sound, and requires the ears using, to establish a sound that is pleasing.

This thing is modular! Who would have thought it! Most of the elements of this reverb can be turned on or off, as mentioned earlier. It’s so modular that it’s possible to use this tool without touching any reverb. Here’s a list of some of the building blocks that you can use. 36 damping, 30 EQ filter choices, 33 Attitude types, 4 Attitude routings, 4 Density modes, 12 Contour modes, 2 Modulation modes, 3 Modulation densities, 4 Dynamics modes, 4 Dynamics routings, 2 special spatial modes, and 4 delay feedback/Time modes.

Not only does this give you flexibility in how you want the plugin to affect your sound, you can also not use elements to save CPU – very useful given the typical amount of power a reverb plugin uses.

Here’s a track I wrote, using several instances of the B2 for space, and for SFX. Lush!

Conclusion
In the bumpf for this plugin, there are several references to having plugins that become a part of the music-making process, as opposed to plugins that you use every now and again. After getting over the initial fairly overwhelming first impressions, this has become a core plugin for me, even after a short time of using it. As 2C makes reference to in the manual, of the need to use your ears, it’s not hard to hear how good the B2 sounds. Its not just a killer reverb tool, it is also an excellent sound design tool, with a large complement of effects to add to the reverb unit. Compared to a convolution reverb, it’s light on CPU, but without sacrificing much in the way of quality. Highly recommended, and worth it’s asking price. 2C have also just released a 64-bit version on their site. Here you can hear a bunch of different artists using B2 in various ways on their material.

…Its not just a killer reverb tool, it is also an excellent sound design tool, with a large complement of effects to add to the reverb unit…