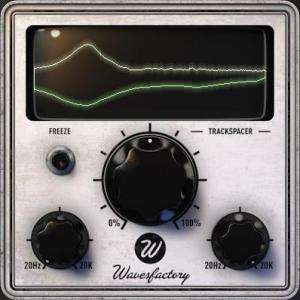 WavesFactory hail from Mallorca, and have established a reputation for excellent Kontakt sample library instruments. Last month, they made their first foray into the plugin arena, with Trackspacer.

Trackspacer essentially creates frequency space in one instrument, to make way for the same frequency in another instrument. It’s kind of like compression side chaining, but with EQ. Instead of squashing the overall level of a sound, a multi band EQ lessens the volume in certain frequencies. The plugin analyses the frequency content of the audio that it’s working with, and applies a 32 band eq to remove frequencies that are in another track.

You need to know how to set up a side chain in the DAW that you’re using. If you don’t know already, there’s a useful little help section in the manual, and it really is a useful thing to know how to do – it will really change the way your mixes sound, and help you get a fuller sound with much clarity. Here’s a video and article on side-chaining for you.

Here’s a video demonstration of Trackspacer in action:

The GUI is simple and effective. There’s a window taking up a third of the GUI that displays the changes in audio that trackspacer makes, in wave form.

Ratio – Similarly to compression, the more ratio is added, the more the EQ is applied to the sound.

Low pass/High pass frequency control-These set the frequency of the low and High pass filter, between which the signal is activated. So if you don’t want anything to happen to the low or high end, you can move these up to affect only the midrange. By setting the passes at close frequencies, you essentially create a notch filter to apply the effect to.

Freeze-This freezes the algorithm, so the EQ isn’t being automatically altered, but stops at the last position.

Waves Factory has done a great job with this plugin. With the amount of CPU around nowadays, this kind of processing is possible with not too big a dent in your power. I think it would be a great compliment to other dynamics plugins. Whereas with compression you squash the overall signal (unless you get into multi band, which is more complex) with this, you can select a frequency that gives you fairly clinical precision band choice to eliminate the signal at that frequency. If you’re just wanting to affect a small part of a signal, this could be a very useful quick tool that saves a lot of time over multi band compression.

I really liked it as a voice-over tool. I found that ducking the background sound didn’t affect the background noise as much as with simple compression. The voice stood out, but with a little tweaking, it was a lot harder to tell that the background had been affected at all.

The following is a demonstration of Trackspacer being used in that sense. Throughout this demo, there are different parameter positions, to different effect.

I found it most useful in very dense mixes, when trying to fit another instrument in. It seemed to my ears to clear space in a wall-of-sound type mix more clinically than straight compression.

I liked this plugin. For the cost, it’s hard to fault. If it cost more, I would definitely start asking for more control, especially of the attack and release of the EQ ducking. The lack of control there was at times an issue, especially with comping bass to ‘compress’ from the kick. Sometimes artifacts appeared such as clicking which could easily be resolved with attack and release functionality. Also the rhythmic breathing/pumping used to great effect in a lot of dance music is impossible – as it will release at the set time.