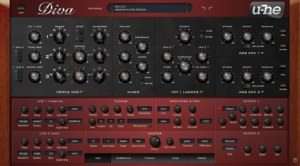 I love U-he’s products. Ever since I bought the filterscape plugin, and got completely befuddled with the masses of routing options, I’ve always been a little excited to see new releases land on the newspage.

And in rocks DIVA, this semi-modular beast, modelled on not one, but several synths the world defines as classics.

Some neat and nifty programming that once again sends my little brain into paroxysms of confusion enable the makers to claim more analogue-y sound than previous digital emulations. And by Jove I think they may have cracked it. But for that joy you pay the price – on cranking up to full power, each note played eats away at that precious CPU like it was entering a black hole. In warning, the very first sentence in the manual begins with a delightful understatement: “To get the most out of Diva, you will need a powerful computer. She can be very demanding…”

But oh does it sound incredible. A fair tradeoff in my book – with the Moore’s Law advancement of technology and computer power as it stands, it won’t be long until the old computers handle this synth with ease. And I think it’s starting to get really tricky distinguishing between emulations and the real thing.

Anyway, enough guff. To the review:

Because of the nature of digital simulation, and the finite limit of the sample, calculating analog feedback paths is by definition slower than the original. This latency quickly becomes audible, and we hear it in various ways – either as a ‘smear’ in some of the top resonant ranges, or perhaps as a slightly harsher, thinner tone. U-he have created programming that by trial and error, tried to predict the feedback path, adjusting all the way, to have the same feedback paths as the modules they’re emulating, without the usual digital delay time. But as previously mentioned, you pay for it with CPU. So U-he have cunningly introduced 4 different levels of accuracy in their rendering. This concession enables you to use a mode that will work on a less powerful computer.

To give a demonstration of the difference in quality, here’s a little sample video switching patches between the least and most hungry accuracy modes:

Diva is semi-modular, in that the foundational elements of the synth (Oscillators, Filters, Envelopes) can be swapped out for a variety of different modules based on emulations of several historical synths. The layout is clean and intuitive – a single click on a little triangle opens a drop-down menu to switch out the module.

There are 4 different Oscillators; triple, dual and single VCO (and dual VCO eco). There are also four swappable filters: Ladder, Cascade, Multimode, and Bite filters, again emulated from history past. All have different parameters, and respective characteristic tones. A nod to the Manual here – it clearly lays out the differences between the various oscs and filters, and the structure and potential uses of each of them. As an example, the triple VCO contains morphing oscs, with FM and filter feedback. The Dual VCO has multi-wave oscillators, with PWM and sync. They sound very different, but I don’t think it’s a case of one sounding better than the other. They just implement differently, and rather than being a complex mess, the clean layout makes it simple to switch out modules, and experiment sonically.

There are 2 LFO’s (the synth has a bunch of modulation sources, listed in the manual) You can choose from a select list of waveforms. There are also 2 effects slots, for delay, chorus, phaser, reverb, and a rotary speaker emulator.

The presets that you get straight up with DIVA are really killer. There’s re-creations of the whole of the patch bank for the original juno 60, which is a great jump-off point to explore the sounds DIVA can make; there are several other banks totalling 1200 presets in all. There’s a useful favourites/junk option, enabling you to de-clutter the presets page, and get to the ones you use the most, quickly. It’s easy to create, save, redo and undo your own creations as presets too.

Using the presets as a starting point (of which there are also 10 template presets of classic synths) I really enjoyed creating a patch, then switching out the filter, envelopes, and oscs with one click of the mouse, thus making a completely different sound. I know it’s been done a million times before, but somehow this feels different, maybe it’s because of the intuitive layout, or maybe because you feel more like you’re adding one manufacturer’s filter to a different one’s oscillator. I don’t know. I could just be getting carried away in the moment, but it is really fun, and I found it hugely inspirational.

The makers could have stopped there and created a beautiful piece of software. But being U-he, of course there’s more. You can really dive into some more esoteric modifications of the synth, that only add to its characteristics. Heavy duty words like ‘rectify’, and ‘invert’ start to pop up. I liked the trim panel, which enables you to add tuning and drift to the separate voices within the patch, and add slop to the cutoff and envelopes, adding to the analogue-iness of the sound. And of course, there’s the master panel, containing the important and useful accuracy menu.

This synth really takes the biscuit. Sounds ranging from creamy liquid loveliness, clean glassy pads, to screechy distorted madness. I loved the layout, and the instant access to several different sounding filters and oscs with one click.

I’m more of a musician than a technician, and while I’m always keen to learn and educate myself on what exactly I’m dealing with, I really love it when a piece of gear shows up that’s intuitive without sacrificing depth or flexibility. I tend to get bogged down with options, and find that it stifles my creative flow somewhat. With DIVA – I found a great balance of simplicity and quality. Quick tweaking took me into fresh territory, and I found myself enjoying the moment creating different tones and textures, but very quickly coming up with really usable sounds.

If you’re in love with ‘that’ sound, but can’t afford the original hardware, you’re going to get within inches of the same satisfaction with this software. Seriously. It’s well presented, there’s a feast of presets from the Pros to give inspiration, and you’ve got several different synths all melted into one! AND you get to change the colour of the midi signal LED to whatever you want. Doesn’t get much better.

…If you’re in love with ‘that’ sound, but can’t afford the original hardware, you’re going to get within inches of the same satisfaction with this software. Seriously…