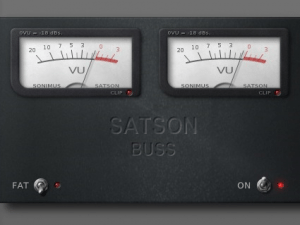 In the past 15 years or so, as the computer-based digital recording phenomenon has steadily eclipsed the analog method at practically all levels of enthusiasm, from amateurs to professionals alike, one constant complaint has been the “lack of character” often perceived when working in the digital realm. At the center of that argument is the apparent move away from the implementation of the analog recording console. In the days of tracking to tape, the console was the centerpiece of the studio. In the case of large pro facilities, these consoles came to be mammoth electronic wonders from storied manufacturers like Solid State Logic (SSL), Neve, EMI, and Trident, to name a few. As a microphone or line level signal was passed into these consoles, the signal was affected by the circuitry along the way. Different manufacturers would employ different components and circuit designs of varying complexity, adding subtle twists and turns to the sonic imprint of each console. Even the physical distance of an input channel from the output buss was known to affect the sound, especially in the case of particularly large boards.
Often, the effect of the console can be heard, even by the unsuspecting novice. Many great sounding records over the years can attribute some part of their sound to the console employed by the engineers and producers who made the album. Examples of “simply cannot-miss” console tonalities captured on record include: Michael Jackson’s Thriller (recorded on a Harrison 3240), Nirvana’s In Utero (Neve 8078), Queen’s eponymous debut album (Trident “A” Range), Nine Inch Nail’s The Fragile (a record that literally encapsulates the SSL 4000 G+ sound), and of course, Pink Floyd’s The Dark Side of the Moon (EMI TG12345).

For several years, it appeared that “the console sound” would be lost in the age of the computer-based digital audio workstation; however, recently, a new breed of plug-in has emerged to address the issue: the console emulation. Now, Sonimus has issued a plug-in called Satson, that enters into the relatively uncrowded field of console emulations. Satson is moderately priced at just $39 USD and is available as a VST/AU for Windows and Mac in both 32– and 64–bit varieties.

A quick look
The plug–in is a snap to install, using personalization in lieu of more user-unfriendly software protection models. After the quick installation, the user is greeted with two very modest and simple-looking plug-ins: Satson Channel (designed to mime a console input channel) and Satson Buss (designed to model a console main, complete with crosstalk). The Satson Channel interface is quite simple, with two large, clear analog-style VU meters, a gain knob, high and low pass filters, a “Fat” switch, and an “on/off” type bypass switch. The Satson Buss is even more simple as it loses the filter section and offering only “Fat” and “On/Off” switches. 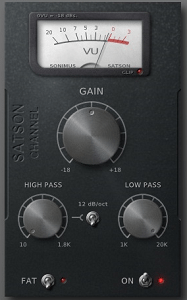 How does it “sound”?
Departing from the methods of predating competitors, Satson does not make much of an attempt at emulating any one particular console. The fact of the matter is, though, that the general tonality of Satson is more akin to SSL than anything. In gentle settings, the plug-in sounds clean with just a hint of added dimensionality. As the gain control is pushed, the sound tends to break-up slightly on the top end , again in a very “SSL” sort of manner.
“Subtle” is definitely a word that describes the impact of Satson in most milder settings with the “Fat” switched off. Engaging that parameter is where the fun begins. In essence, the “Fat” switch adds some low frequencies in a way that models the grand old Neve console’s of the 1970s. Like those coveted consoles, Satson’s “Fat” switch imparts a certain warm, buttery sheen to the signal. In using Satson to create the demo tracks (in Reaper), I found the “Fat” sound to be so desirable that it became my default setting for Satson.

Another great tool found in both Satson Channel and Buss are the VU meters. These meters are calibrated to function responsively, just like real-world meters. These meters fully support proper gain-staging needed for professional mixing situations and let the user make a better judgment of the volume needed for a particular track. The respective high and low pass filters, found on Satson Channel, are another great addition to the plug-in. These filters are particularly musical and smooth, especially in terms of software filtering. The high pass can be used to clear the “mud” right out of a mix. I found this very useful for isolating some muddy electric guitar tracks in a mix, leaving the overall tonality as punchy as it was recorded, without stepping on the frequency range of the bass and kick.

Used on anything deemed to be a “buss,” Satson Buss adds sonic cross talk and even more spatial girth to the tracks already ran through Satson Channel. This effect is again, subtle, nevertheless it becomes more dramatic in the context of a dense mix featuring multiple channels and buses all treated by individual instances of Satson. Just like a real-world console, routing the signal through various instances of Satson “clusters” certain frequencies in a very “analog” sort of way, blurring the jagged edges of sterile sources and brittle highs. The Satson Buss is slightly limited in terms of controls, having only a “Fat” and “On/Off” switches, but this is very much in line with outboard console operation. Sometimes, limitations are just what is needed.

CPU impact
Perhaps the best features of Satson altogether are its modest price and extremely low CPU impact. Operating in 32-bit mode on my i3-equipped Lenovo laptop, each individual instance of Satson occupied less than. 0.5% CPU, making its use a reality across all tracks and buses. These metrics also compare favorable against Satson’s few competitors, which are all considerably more costly in terms of performance (and price). Switching to 64-bit operation offered equally impressive results, with that version of the plug-in clearly tightly coded as well.

It may be obvious but…
What Satson is not is a “magic fix.” Satson has no presets. It has no secret voodoo that will make bad mixes come to life. Songs will never mix themselves, even on analog consoles. Satson is great at being Satson: a plug-in designed with the seasoned mix engineer in mind. If you are the type who understands building a mix from scratch and who appreciates the subtle nuances imparted by console circuitry, then Satson is for you. If you are looking for instant “Chris Lord Alge,” then you may want to look to the pricey “Signature” plug-ins on the market. Still, the bottom line is that Sonimus Satson represents both an incredible value and a technical marvel in terms of console emulation. The sound is truly that of the analog realm. Satson’s CPU performance puts the plug-in at the head of the class in the world of console emulation plug-ins, and the $39 price tag makes Satson a “no brainer.”

Conclusion
Sonimus Satson is a highly efficient, cost-effective entry into the exciting world of console emulations. Satson boasts quality sound and tight-coding, making it useful even in the very densest of mixes. The plug-in is very subtle in effect and is clearly aimed at the discerning, audiophile engineer.

…The sound is truly that of the analog realm. Satson’s CPU performance puts the plug-in at the head of the class in the world of console emulation plug-ins, and the $39 price tag makes Satson a “no brainer”…