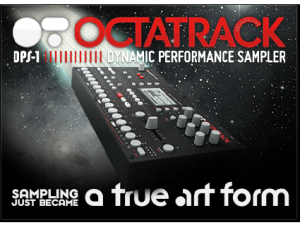 The Octatrack has caused quite a buzz since its introduction. We got a new collaborator on board, he’s one of the lucky early owners (and not new to Elektron’s stuff, by the way). We asked him to tell us his impressions after the first week with this new instrument (and we also got him to take a rough “demo-performance” video while doing the test).
Here we go…

As you may know, the Octatrack it’s a ‘performance sampler’, a kind of swiss army knife of samplers, designed to make audio mangling, looping, and so forth easy; and to facilitate live performances for electronic musicians, enhance DJ sets, and the like. Realtime slicing and tempo changes, pitch shifting and time stretching, and a variety of filters and effects are onboard, and all at one’s fingertips thanks to the (relatively) simple controls. You can read about the specs at Elektron’s website, or, frankly, all over the internet, so I won’t rehash that here.
Instead, I’ll give you my impressions of the first week or so I’ve spent with it, and cover the good, the quirky, and the bad of this fascinating piece of equipment. I’ll start with the bad, and work backwards.

The bad
First things first, early adopters of the Octatrack are in for a few unpleasant surprises: there is no MIDI sequencing functionality in the shipped Elektron (there is a MIDI clock out). It is running V.099 of the software. Elektron has a great history of refining and providing updates to its products, and have promised the ‘MIDI machines’ in Q1 of 2011.
In addition, the promised ‘real time sampling’ is a bit confusing and not quite what it seems; there’s a large series of steps needed to create a sample from a ‘realtime’ source, and it’s not the instantaneous experience it should be. Again, this is something that can be rectified with a software update, but in the meantime, be prepared to do a little preparation to sample things ‘in real time’.

Also, I found the manual confusing. Elektron products all have similar operating metaphors (you have what amounts to a 16 step sequencer, each sequencer is connected to a ‘machine’ which performs a specific function, etc), but it’s often difficult to figure out exactly what button combination to press to work some of the Octatrack’s magic. For example, It’s possible to set the crossfader to select specific slices of a given sample very quickly, but the method for doing this isn’t made very clear. Part of this comes from an insane amount of flexibility, and the manual is geared towards describing generalities (it’s possible to set up the crossfader to control almost ANY parameter, and even specify the range it controls). I think a few specific examples would help things.

The good
Having said all that, this machine is deep, powerful, and very cool. I’ve spent a week with it, and I am just coming to terms with it’s possibilities. There are two main machines for sample playback- “flex” and “static”. Flex machines load right into the onboard RAM, whilst static stream from the Compact Flash card. Flex machines offer additional parameter choices (right now, this is limited to the sample start position). True to Elektron form, each parameter can be “locked” at each step, allowing you to make changes to individual steps in a sequence, or even changing a sample for a given step.

Almost everything can be assigned to an LFO, as well. Flex machine based samples can be sliced, for example, and then the ‘start play’ position can be set onto an LFO, making instant glitchy beats. Adding slices and LFO-driven filters to melodic samples transform them rapidly into unrecognizable new sounds. Careful manipulation of these parameters open up new possibilities, and it’s fairly easy to find yourself playing with very simple sample sets for a long period of time. Here, I’ve taken a familiar sample, sliced it, placed random slices on the individual steps, then lastly added a filter with an LFO controlling one of the paramaters; by the end, the sample is completely transformed. Note that this was done in about a minute, and is more ‘demo’ than ‘performance’.

It also works very well as a simple ‘playback’ or looping machine. Loops can be made to fit the tempo, or within a certain number of bars; artifacting of the sound only begins when the samples are timeshifted to an extreme degree, meaning adjustments to backing tracks or lengthier samples can be done without worrying about off-sounding music. Here I’ve taken a death metal song, and slowed it down then sped it back up so you can hear the timestretch in action. This was done with one of the “Static” machines, which is capable of holding very long samples.

The honeymoon goes on
Combine some straight forward samples with the Octatrack’s audio mangling possibilities, and you can create ‘on the fly’ remixes of yours or other’s material; use the optical fader to control parameters, tweak settings and add in some of the onboard effects, and, with minimal preparation, your sets can really go places. It’s ideal for someone like me, who makes computer based music, and is looking to take it live without being stuck behind a laptop. But I can also envision it working well in a studio setting for quick ‘pattern breaking’, creation of breakbeats, or as an effects box.
Even without the promised updates, the Octatrack has a lot more to explore. I haven’t worked too much with the effects, outside of the filter and the two equalizers (a ‘DJ’ style and Parametric EQ), or used the ‘Neighbor’ machine (which allows larger effects chains) at all, and I am just coming to grips with the LFO routing possibilities. It’s really an amazing set of tools, in one compact package. There are a few gotchas, as but once the updates arrive, I’m fairly confident this little box will become indispensable. As it stands right now, it’s simply awesome.