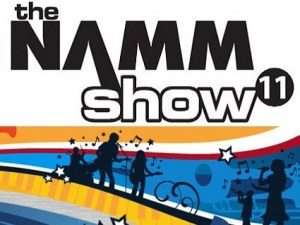 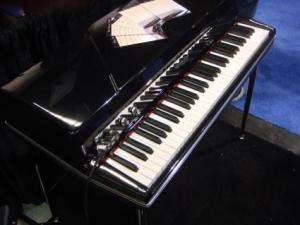 Last year we saw the rebirth of the Rhodes Piano from the re-formed the Rhodes Music Corporation. It’s great to see renewed interest in electromechanical pianos, so I’m happy to say that Rhodes has some still competition with the new design from Vintage Vibe. Anyone who has done any maintenance work on a Rhodes is likely familiar with Vintage Vibe, who provide a thorough assortment of aftermarket parts and instructional videos for Rhodes and Wurlitzer pianos, clavinets, and the like. 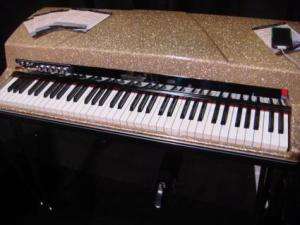 This year they surprised us with their own original electric piano. It looks like a Wurli 200a from the outside, but has hammer/tine Rhodes-like guts. It is available in active or passive versions, and there is a stereo tremelo option as well. I tried it through a pair of fender amps, and it’s the real deal. Each one is custom built, so the details vary, but the base model weighs in at a back-sparing 50ish pounds, and is more affordable than the new Rhodes.
If you need the best, I’d check this out before either ordering a new Rhodes (which I think are awesome as well) or paying for a full refurb of an old one, which can add up fast. 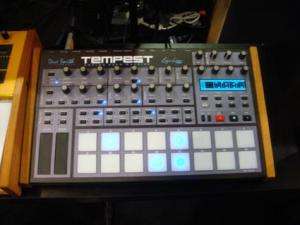 Finally a working prototype! It’s been several years in the making, but the first half of the fabled collaboration between synthesizer design pioneers Roger Linn and Dave Smith is finally coming to fruition, and it’s been worth the wait. It’s not quite ready for retail, but the demos were very functional and got me drooling. Analog sound generation augmented by digital oscillators, dual pressure-sensitive ribbon controllers, per-step and real-time CC automation, the list goes on.
More important than the feature list is the fact that it just sounded proper. It should be shipping by June of this year. Note that there will be a second collaboration, the Linn Drum II, that they’ll finish up after the Tempest ships.

Affordable plug-in (no batteries) headphone amp with built in analog limiter for use with in-ear monitors. Integrated headphone/guitar cable keeps onstage wiring to a minimum. The Rock Box can accept balanced line or speaker level connections, giving it versatility in club environments. My singer just started using an in-ear monitor with a wireless belt pack and we’ve had troubles with the wireless connection. The Rock Box keeps things wired and simple. I’m considering picking one up.

$149 for a housing (rackmounted or tabletop) and power supply. Getting into modular synthesis has never been so affordable. 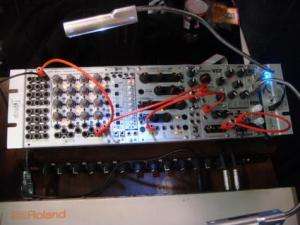 Combines low-noise shielded performance with the convenience of stackable banana cables for combining or multing signals without having to use a mult patchbay.

Jack Deville Clickless True Bypass
Easily add a clickless true bypass switch to any guitar pedal. Also contains other classified mechanism for tone improvement. This is a simple way to be able to use vintage pedals when you want them, but bypass the tone sucking non-true bypass components when you need them out of the circuit.