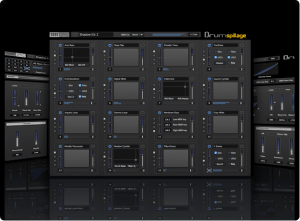 Drumspillage is an electronic percussion synthesizer plugin from Audiospillage. Rather than going the sample route of many of the percussion plugins out there, Audiospillage has chosen to use complex algorithms to model percussive sounds. This has the immediate advantage of using a lot less CPU and memory than the sample versions, while hopefully still being capable of creating harmonically rich and interesting percussive sounds.
The plugin is AudioUnit only at the moment (promised future updates include support for VST).

View
Upon loading, the view is a clean and familiar MPC-style set up with a grid of sixteen pads that each trigger a different percussive sound. To get you started, there are eight complete kit presets of varying tone and timbre.
There are two basic views accessible at the top left of the plugin – the Pad editor, and the Drum modeller (Both views I found fairly intuitive, but Audiospillage have provided two useful and comprehensive manuals anyway, to help you out).
The Pad editor view is the MPC-style view. It’s more of a general utility area for adjusting the volume, loading new sounds, panning, muting etc. There are four small buttons to the side of each pad, and clicking them will give you a few various editing options, from adding effects to each individual sound, to assigning the midi settings. One button leads to an XY pad assignable to a large list of the internal effect elements (more on the effects in a bit).

Going deep
The drum modelling editor goes deeper into the architecture of the plugin. This is where you create and mould the sounds that you’re going to work with. The sonic basis of the plugin is 11 specific algorithms that model different forms of percussion, from handclaps, claves and membranes to various kick drums, snares and cymbals – the theory being that several model algorithms present more opportunity for fresh sounds rather than a single general algorithm. (There are more algorithms promised in future updates) I did find that it was fairly easy to carve out the sound I was looking for from an algorithm that was already in that general sound-world. Each algorithm has various elements that can be adjusted – for example, the bass drum algorithm has 2 oscillators of which you can change the waveshape, the pitch, add a small click impulse to the attack, warp the pitch slightly, and adjust the amount of frequency modulation (if any) you want to the sound. This gives huge scope with which to start tailoring a kick sound to your needs. (Each algorithm has slightly different elements that can be adjusted, to best suit the needs of that sound).

After the adjusting of the algorithm itself, there are several effects that can be added. With all these effect building blocks, a huge variety of electronic drum sounds is possible, with almost only your imagination being the limit. These effects include 2 ADSR envelopes, 2 LFO’s assignable to many different sources, 6 different kinds of distortion, and a multi-mode filter, that can itself be modulated by the envelope and LFOs.

After spending a fair while creating my own sounds from the bottom up, and also tweaking the preset sounds that are provided, I created a small library of really interesting and useful sounds. I got close to the big, deep clean 808/909 sounds, and also came up with more off the wall glitchy clicks and ever-modulating sounds using the LFOs and filters.
I found that it is definitely a plugin that requires some effort straight away – you’ll need to spend some time with it to come up with any results. If you’re wanting a quick-stop massive bank of presets to go through to find the sounds you want, you’ll need to look elsewhere.

However, with Drumspillage, once you get the hang of the process, it’s really easy to create the sounds you’re looking for, down to the smallest detail. I particularly liked the envelope in this plugin – it’s very fast, and moving the attack around just slightly can really change the feel of the sounds. There were a couple of other little things that I’ve not seen before that I really liked too. One was an Accent editor – where you could choose the midi threshold to change the velocity level of separate sounds – making it really easy to create accents on specific sounds. Doesn’t sound like much, but it also adjusts some parameters on the envelope as the velocity rises, so as you hit harder, the timbre changes slightly too. And the opposite happens as you play quieter. Very nice!

Conclusion
Overall, I was loving the sounds that I could come up with from this plugin. It really feels like you’re designing the sounds from the bottom up. If you have the time, and you have a specific electronic drum sound that you’re looking for, chances are you’ll be able to get exactly what you need here. For their first full plugin creation, Audiospillage have done a stellar job creating a drum synth that’s easy to navigate, yet capable of creating sounds that leading electronica artists such as John Tejada, Plaid and Coldcut consider some of the deepest and best out there at the moment.

…Once you get the hang of the process, it’s really easy to create the sounds you’re looking for…