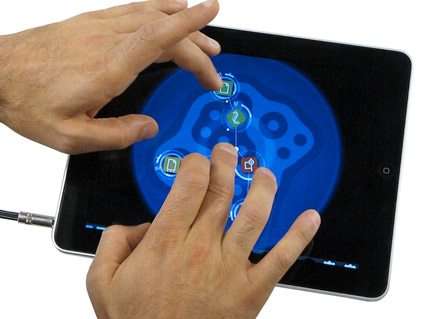 Reactable is a new iPad app (iPod and iPhone are supported as well) that is the software version of the hardware instrument (created years ago by a spin-off company of the Universitat Pompeu Fabra in Barcelona, Spain) used notably by Bjork in her live shows.
In essence this instrument takes a new approach to modular synthesis where different sound elements interact or react with each other depending on their spatial relationship on a playing surface aka table. The hardware instrument used blocks of differing shapes to represent the building blocks of sound synthesis vary from oscillators, filters, modulation sources, sequencers etc. So for musicians familiar with modular synthesis the method of build sounds from the simple elements is easy to grasp and brings an interesting way off building new patches.
The hardware instrument comes in at €9700 so having a software equivalent available at around 10 dollars is quite significant to get a feeling for this type of synthesis.

The Reactable app comes with 10 presets to give you an idea of the flexibility of the app and what it is capable off. Interestingly the presets vary from chilled out jazz to glitchy Aphex Twin-esque beats to sound FXs that show case the flexibility mentioned. Before going any further it is worth mentioning that as well as the modular synthesis idea it is not limited to this only and so samples are also included and can be added to build a full track up.

Touching on the sample side of things the user is able to add their own samples and so brings in the idea of Reactable being a blank canvas for musicians to interact with their own tunes/samples in an unique way with performance in mind in particular. There are a limited number of building blocks available, 12 in all, when a new table is loaded with a couple of samples, oscillators, filter, sequencers etc but this isn’t really a criticism of the app but a useful way getting the most out of the app. The user simply drags the building blocks onto the virtual table and depending on where these blocks are placed they interact differently with the other blocks around. So for example placing a filter between the output and an oscillator will filter the sound by differing amounts by holding down on the block and then opening and closing the filter. Each block has a different function when held down but these are quickly learnt and are focused on parameters that would add to performing a track live.

The menu settings are user friendly with the ability to save the tables created, access help and manuals and manage the samples. There are two further options that give the app a bit more life with the ability to download other users tables directly from the Reactable Community site and the option to record your compositions to WAV for use outside of the app. This is great idea, although becoming more common place for music generation apps on the iPad, so that the time spent on Reactable can be used in more conventional DAW software. Another cool idea is that, if coupled with a microphone, Reactable mobile can also be used as an advanced effects processor.

The one element that was striking is the similarity between this app and another app called Jasuto that is essentially the same in function (virtual modular synthesis using building blocks and their spatial interaction) but is far more menu driven than Reactable.
Having used both it is fair to say that Reactable is far more immediate and intuitive to use and get some reasonable sounds coming out but I suspect that Jasuto has a greater depth in terms of sound design but probably less in terms of performance and ease of use. So although similar I suspect they would ultimately appeal to different types of people.

Conclusion
Reactable is a genuinely fun app to use and make music and the ability to approach sound generation from simple elements also acts as a great way of learning about basic syntheses techniques and sound design.

…a new approach to modular synthesis…