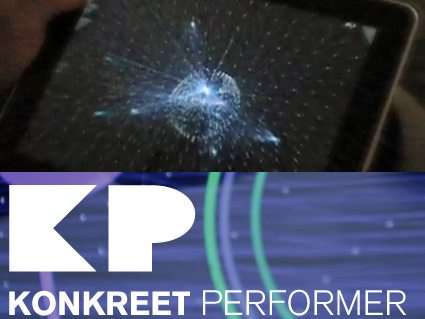 A few days ago I’ve met the guys from Konkreet Labs, to have a closer look at their Konkreet Performer app for iPad.
Konkreet Labs is Shai, Marc and Gwydion, a functional mix of different backgrounds and skills (photography, music, interaction design, programming, etc.).
Meeting (two of) them I’ve been able to know more about the birth of Konkreet Performer, a quite peculiar app, where sounds and vision interact in a very organic way.

The concept for this app comes from real needs: having a tool that could be used as an elegant controller and that could also be a solution for the ever annoying “what’s this guy doing with his laptop?” problem during performances. Maybe this app won’t have the same effect a guitar has on the audience, but the point is that we definitely need tools that allow more interactive and enjoyable performances.

At the same time with Konkreet Performer they also tried to address another “problem”: usually, during performances, the visuals are something that comes “after” the music. Here the process is different, the visual part is an integral part of the performance (in a more attractive way than, for example, on the Tenori-On, one of the few really innovative and interesting experiments of these years).
People can see what the performer is actually doing, since all that happens on the iPad screen can be projected on a screen (using a separate software running on a computer, in perfect sync).

As you can see in the above video (quite low-fi, sorry) taken during our meeting (just a drum loop and Shai controlling a synth bass sound in Ableton Live), the interface is radically different from those of a traditional instrument. It’s a new environment, where you can dive in and just experiment, a bit like when the first sythesizers came out, with no keyboard attached.
It’s not going to be a software for everyone of course. And it’s not meant to replace traditional controllers. But for those into experimental music, ambient, electronic music in general it will be great fun!

All you need to know about Konkreet Performer:

Konkreet Performer is a refreshing concept and it looks great (it’s also quite stable, even in this pre-release version). Time will tell if it will be a winner, but I’m glad to see a project like this, which tries to make a proper use of the touch-screen devices’ innovative features instead of emulating more or less vintage instruments or traditional interfaces.
I think it’s one of the few things I’ve seen until now that could really make you run to buy an iPad. And I’m sure once it’s released, other developers will bring out some cool new instruments to use it with. We’ll keep an eye on this, stay tuned…