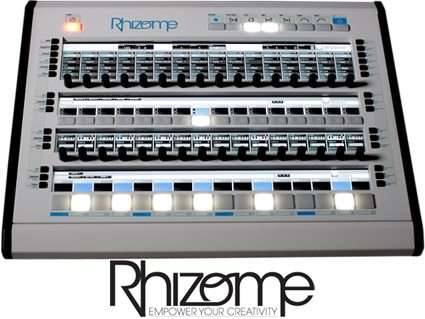 Yesterday we visited the SAE Alumni Convention in Berlin. It was a nice chance to meet developers and audio pro companies showing their products in the SAE’s studios and halls.
We spent some time with the Feeltune guys, the French company behind the much-talked Rhizome.

Rhizome is… oh well, a groove machine, a sequencer, a sampler, a VST host, a controller, basically an all-in-one music production machine. It can be used both for live performances and in the studio as a composing tool.
Under the hood Rhizome is an Intel-based computer running a very light and optimized version of Windows XP, with a display (divided in 4 sections), buttons, encoders and 16 pads. The audio in/out section uses RME hardware. Depending on the version chosen, the Rhizome comes with a set of plug-ins (virtual instruments and fx).

Rhizome is going to reach the market in November, and the two models shown yesterday were pre-production models waiting for the final touches.
We will wait to put our hands on the final release for a review in the next weeks.
After spending less than 30 minutes with the Rhizome, we can say that for sure there’s a lot of work behind it, from both software and hardware points of view.
The software has been developed by Feeltune in collaboration with Ohmforce, which also provided some of their plugs (like Minimonsta) to the stock instruments and fx the unit ships with. Of course you can install other plug-in you’ve already bought.

At a first look, the workflow looks good, once you’ve learned the basics (for a computer user it won’t be hard, trust me). Lots of flexiblity (step sequencer, real time mode, song mode, live sampling, etc.). The biggest drawback at the moment, for me at least, is that some vst instruments and fx have a preset management system that is not directly compatible with the Rhizome. This means that you can’t browse through the presets using the Rhizome’s knobs, and you’ll need to use an external monitor to manage the thing. For example this affects some Native Instruments plugs, like the FM8. The Feeltune’s devs are working with software audio companies to try to make the interaction between plug-ins and the Rhizome as seamless as possible though, so stay tuned for news.

The Rhizome has grown up in these months also thanks for the early feedbacks the company got from musicians and producers (an early version was presented at the Musikmesse a few months ago). The guys definitely want it to be a succesful device and they anticipated they’re gonna work hard to make it even better once the first models will start shipping (updates, etc.). No corporate bullshit, they’re musicians and they really love their new baby, so best of luck to them!

Official prices are not announced yet (should start from approx. 3.300 euro though), but don’t expect it to be cheap. As said, this is a well designed all-in-one machine, produced in France in small quantities (and there are no plans on producing it elsewhere), so it’s more like a boutique item. The price won’t be that different from a pro audio setup anyway (computer + display + high quality converter + software, etc), so the final choice will be more about the benefits that a different, and definitely more “hands-on” and compact approach could give to your creativity. Stay tuned…