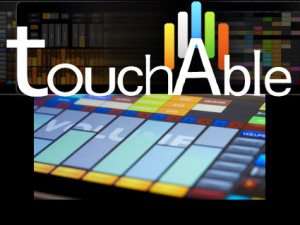 TouchAble is the latest iPad app to provide touch control of Ableton Live, or in their own words “Because Live has much more to offer, Touchable provides a complete control solution.”
The “complete control solution” is quite a claim and I have to say I was pretty skeptical having had experience of the other available apps attempting the same/similar goal (more will be mentioned later about the competition).
However after only the first 30 minutes of actually using the app all my initial skepticism had disappeared.

The initial setup is extremely straight forward with clear instructions on installing the touchAble server software on your main computer running Ableton. This server links Ableton with touchAble on the iPad over a Wi-Fi network (this can include an adhoc network) and after the first time of setting up everything is pretty automatic there on after.

The app has two main areas, the first is the control bar on the right that allows the user to select which function they would like to use e.g. Clips, Mixer, Devices, Keys or Pads. The second is the main screen that changes based on the above selection. The great yet simple idea with this is the fact that you are given the option to choose whether all the main screen is devoted to a single function or split in two for multiple functions. Not only this but you can decide how this appears too either on top or bottom e.g. clip grid in the top half and the Mixer in the lower half. What is clear is that someone has actually thought about using this and the need at times for access to multiple functions.

The clip grid launcher section is intuitive to use with the colours and text directly from Ableton and the navigation is simple with varying scrolling speeds too. Whilst a clip plays a moving bar within the cell moves across showing the user where it is in within the clip, this also helps with keeping track of what clips are playing too. Along side these there are track clip stop, solo and arm buttons and scene triggering again with the Ableton colours and naming.

Next is the Mixer section that again is simple yet well thought out and the user can quickly select what parameter is to be changed i.e. Volume, Sends A, B, C, D, Toggles and Pan.
The Volume and Send controls are responsive and I was able to change all 8 volume faders simultaneous so working with multiple faders works nicely too. One really nice feature I found in the Settings menu was the ability to ensure the volume faders can never exceed 0dB, this will come as a great relief for many DJ’s and live performers.
The mixer can be configured in two alternative ways (by the touch of a virtual button) to either show 8 tracks with two different banks of faders e.g. Volume and Send A or alternatively 16 tracks with a single bank of faders i.e. only Volume or Send A not both. The toggle selection looks remarkably similar to the layout of the LaunchPad with the ability to reset Volume, Sends and Pan and also options for muting, soloing, arming and the Monitoring for each track too.

The Devices section is next and this is split across the middle showing the tracks and each device (Ableton and VST plugins) in each half of the main window. You can scroll up/down, left/right to navigate both tracks and devices (this includes the Sends and Master), then simply select the device to be used. At this point the device will appear in the form of multiple faders, each fader having in bold type the parameter name and current value, you are given the option to display 8 large faders and then select banks (if more than 8 parameters) or 32 smaller faders. Initially on selection the app will determine what is the best format depending on the number of parameters in that device. The 8 fader format is nice and clear and perfect for a live situation, however I’m not sure this can be said for the 32 fader format but this depends on the person. If it were me I would simply wrap a device with more than 32 parameters into a rack and assign macros to the parameters I most want to use, this would reduce the number of faders dramatically and speed up the access through touchAble.
Another feature in the device section that in principal looks great is the native Ableton Device templates that mimic the Ableton Devices in appearance. At the time of writing (and the version being reviewed) the only device available was the ‘EQ Eight’ but this worked really well and made the experience highly intuitive. The options available for this device included being able to modify both gain/Q and frequency for all 8 filters simultaneously, changing the type of filter and switching filters on/off as needed. From reading the touchAble website more Ableton devices are to be added on later versions and this is one of the bigger selling points from a user perspective.
Lastly a final Device feature is the ability to switch devices on and off from the initial overview in the device section on up to 8 tracks quickly. Apart from the possibility that controlling a complex device with the more fiddly 32 faders will be of use in a live situation the Device section is particularly strong and well thought out.

The Keys & Pads section provide the user the ability to play melodies/chords etc and drum racks. These two sections use MIDI to trigger the devices and the MIDI routing is setup in Ableton as any other MIDI controller would be. The MIDI channels the Keys and Pads use are defined by the user on the touchAble server that is running before the app is used.
The keys have two single octave keyboards that the user can decide which octave each will play from C-2 to C8 and the keyboard is polyphonic too i.e. assuming the VST/live instrument is polyphonic.
The pads work reasonably well all things considered and the developers have built in the ability to change the velocity of the pads too which at least acknowledges the limitation of the touch screen. However if building beats using pads is a genuine need I would seek out a hardware controller for this whereas the keys are quire adequate for controlling VST synths.

Last but not least the last two features are hidden away discretely in the bottom right hand corner and these are the Clip and Transport control.
The Clip control allows the user to select a particular clip to manipulate, once selected the clip can be switched off, looping, pitch control and the start and loop length. The clip switching and loop on/off functions work as expected but I have to say the start and loop length does not work particularly well in terms of usability. Specifically both are controlled by faders and have a maximum value of 16 bars, the problem is using these with any degree of accuracy is extremely difficult as you can go quickly from 2 beats to 2 bars before you know it. A more elegant solution would be a grid based selection with various buttons determining the length in 1/16ths, 1 beat, 2 beats, bars etc. This would really make this section more usable and powerful.
The transport control is more straight forward and gives the user some good options such as setting both the Global quantisation as well as the record quantisation and switching the OVR button on/off.

So how does touchAble compare to its competition?
Well recently another app called Griid was released that is purely a clip launcher and works pretty well with some neat tricks in terms of navigation and overview of the the Ableton set. However at £14.99 this is expensive for a single function app although Liine who develop the app do intend to build further modules
The main challenger to touchAble is LiveControl<http://livecontrol.q3f.org> that uses the TouchOSC<http://hexler.net/software/touchosc> app in combination with scripts that allow interaction with Ableton. Having used this combination several months ago and now comparing it against touchAble I think that LiveControl has a serious contender and personally touchable was much easier to get up and running in comparison to LiveControl.
However I have also used the TouchOSC app (in conjunction with OSCulator<http://www.osculator.net> an OSC to MIDI routing software) and although it does not have the same degree of depth when controlling Ableton it does allow you to create an entirely unique MIDI controller with as many buttons, faders, switches etc as needed. These are then manually MIDI mapped within Ableton to whatever parameter you desire so this works as a simple but flexible bespoke MIDI touch controller that can have multiple pages and functions minus the clip launching. TouchOSC definitely scores points in this department against touchAble.

In summary touchAble is a serious contender for the best iPad app for controlling Ableton currently and the most competent attempt so far. It is easy to setup, has flexibility with respect to access to multiple controls and so far seems very stable. Having used this for approximately a week I am already boxing up my Launchpad ready for Ebay as touchAble has already made this dedicated hardware device redundant even at this early stage of development. I think this app could be improved with better control of the clip start and length and if they could add a separate page whereby users could build there own control surface especially for live performance situations (much like TouchOSC) this would definitely make it the iPad Ableton controller to beat by a long way.

…a serious contender for the best iPad app for controlling Ableton…