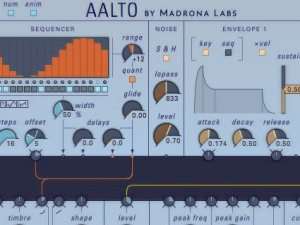 Madrona Labs bring you an inspiring and different palette of sounds available from their new Semi-Modular Synth: Aalto. They claim that Aalto (OS X and AU only at the moment, a VST and a Windows version are planned) is designed to let you create sounds that have been difficult or impossible to make with softsynths before now through the use of patchable and modular design of the synth.

The heart of Aalto is a Buchla-inspired complex oscillator, with FM, timbre and waveshape controls designed to enable a wide range of expressive sounds. These sounds are described as “malleable and alive,” in part because they are made with dynamic calculation, not static wavetables. While this isn’t a buchla emulation, it is more of a buchla inspiration based around the original 1970 Complex Waveform Oscillator that could have been bought and used as part of the comprehensive collection of synth modules brought to you by the legendary company.

A little bit of history on the oscillator will tell you that it used several innovative techniques for dealing with complex timbres. It features voltage controlled modulation of pitch, amplitude and timbre, multi-dimensional voltage-control of timbre space, phase locking, and automatic tuning. This section takes an ordinary sine wave and gives it rich harmonics using Wave Multipliers which are hard to describe, but in essence they take a waveform and add various types of harmonics unlike anything you have heard except maybe the Wave shape and Timbre controls on a Buchla Modular (for those lucky enough to own one). They “square up” the incoming signal and produce harmonic distortion modification to ring mod, frequency shift and sync, putting two different audio signals into these sections and then adding a control voltage produces sounds unlike any other module available. It is one of the signature modules in the Serge System and moves this synth into completely new sonic territory.

To my ears the default patch which, just uses the raw oscillator demonstrates how well the emulation has been done. Some purists may argue that sonically this is not as full or even anywhere near the sound of an original Buchla, but when squaring up the synth to even the likes of FXPansions DCAM Synth Squad, this raw oscillators themselves are very powerful, perhaps derived through the use of the internal modulation and harmonically produced distortion. These sounds are uniquely malleable and alive, in part because they are made with dynamic calculation, not static wavetables.

Just like the Buchla or any modular synth for that matter, Aalto is patchable and gives you a comprehensive ability to modulate and connect together pretty much any parameter to create anything from pulsating bass lines to heavy evolving soundscapes. In fact each voice has a separate, built-in sequencer with a patchable, independently controllable rate and offset that make it easy to achieve evolving, chaotic textures. Each voice also includes a lowpass gate module with a Vactrol emulation in the control path. A Vactrol is basically a light dependant resistor, the more light that shines on it, the more voltage runs through it. You could typically hook one of these up to anything you may be circuit bending and use your hand to block out the light to modify the voyage. The Vactrol equation in this case, slows down the response to incoming control signals through a complex nonlinear filter. You can turn the vactrol response down to instantaneous, or up to a pronounced ring. It is precisely this coding along with the inspiration from the Buchla 259 which makes this synth really something unique to play with in terms of its core sound and functionality. Following the lowpass gate is a patchable waveguide / delay module with a waveshaper and a peaking EQ built into the feedback loop allowing you to really distort and gain the input to output ratio. Because it has such short and controllable delay times, unlike a typical analog delay, it can be used as an additional oscillator or waveguide.

Here are 3 examples of the different areas you can visit with this synth’s unique Oscillator.


Aalto’s filter is a state-variable topology with mixable simultaneous outputs allowing you to sweep through different filters, in this case low pass, hi-pass and notch and combine. Apparently the filters are tuned to have a similar range to an Oberheim SEM filter but with some more overall resonance! To my ears you can hear the added resonance to the filter especially when you push it hard with the waveshaping and add distortion as it gives you a much more pronounced ‘weeeorrrww’ when sweeping. Add more resonance to the filter (in this case with a Q) and you have a pretty awesome sounding filter, but it just doesn’t grab you like those found in Synth Squad for example and I have yet to get it to self resonate which is a shame as I really like to produce percussive sounds using synthesis.

Getting around the synth couldn’t be easier. Everything is laid out with plenty of space, having the main Envelopes and modulators along the top of the synth without he sound generators at the bottom. As I said before this synth work by patching together these different elements just as you would on a modular synth. This is very simple and it gives you a more related feel to the patch you are designing rather than using a basic static interface. What I mean by that is, you can decide how and when certain elements function and effect others, but it is all too easy to go crazy and add more and more cables until you have a complex mess of noise (which I like).

The Patcher area is the large dark central area surrounded by all the modules. It lets you patch signals from outputs of modules to inputs of modules. Signal outputs are the small circles and light up to show the current value of the signal. Signal inputs are the very small dials bordering the Patcher. These dials do not display signals. They allow you to adjust the amount of signal applied to an input. To make a patch cable, drag from an output to an input. You can move either end of a patch cable by dragging the ends around to a different input or output. You can delete a patch cable by dragging either end to where it is unconnected. The input dials control the amount of signal applied to an input. If multiple cables go to a single input, the signals are added together. The sum of all these signals is then multiplied by the input dial value. Most input dials are bipolar, meaning an input dial value can be either positive or negative.

Watch this video to see the basic operation of patching different components.

The other striking feature of the synth are the dials that are used to represent the different values. All of them are displayed with this semi-circular ‘voltage’ style shape which are backed up with the numeric values under each. When you modulate any of these parameters you are presented with a wiggly line as a way of communicating how much this parameter is being modulated by. There are two issues I have with this, 1. is that the the numeric values under/side each dial do not update as the modulation occurs and 2. the dials will jump to wherever the mouse clicks on them which can be very annoying (using the mouse wheel to change the values of the dials works brilliantly though).

Going back to the modulators, you are presented with a nice 16 step sequencer and from that you can trigger from the steps in either the height value or the toggle switches. Both of these have their own outputs as a voltage control as well as a second which you can delay to produce some interesting rhythmic effects. The [glide] knob controls the amount of glide, scaled with respect to the sequencer rate. At a glide of 0, the output steps immediately to the next value on each step. At a glide of 1, the value ramps linearly, reaching the next value at the end of each step. The three waveform buttons in the center snap the sequence value sliders to the preset shapes shown on the buttons which is a very useful little feature.

Watch this video as I set the Sequencer through its paces.

Envelope 1 is typically used for the amp and Envelope 2 is used for whatever you like but you can take modulation outputs from either and use them as you like and that’s what I love about modular synthesis. Both envelopes have an input selector that chooses between MIDI input [key] and sequencer pulses [seq] as trigger sources. When [seq] is selected, pulses from the sequencer output are sent to envelope 1, and delayed pulses are sent to envelope 2. The graphs in each envelope module show the actual shape of the envelope over time. They are scaled to match the total duration of the envelope sequence. Envelopes have logarithmic attack and decay curves, and times are calibrated to correspond with the time at which the output value has traveled approximately 60% of the way of its destination.

I was rather disappointed in the fact that there is only one LFO and I really felt as if I was soon running out of modulators and then having to share sources more than I wanted to. This is great in some respects as it makes you work with what you have and in the real world not all of us can afford several LFO’s in our lovely synth racks. However as this is software based we should surely be offered a more wider range of possibilities. Perhaps this was part of the design concept and thus forcing you to work harder.

Conclusion
In terms of ease of use and as another ‘tool’ for those of us who get a little stuck in our ways with our usual synth VST’s – I would say that this is going to be a synth I’m going to be using a lot more of. Perhaps though this wouldn’t be my first choice for lushes pads or real intricate delights, instead I could see myself using this much more for sound design and quite abstract synthesis. The synth has its own built in reverb which at first I didn’t like, but as I used it I found it to be a good match for most of the sounds I was using and I would definitely look at using this over an external one, it has its own character and its suited well to the overall feel of the synth. Opening up 4 or more of these made my computer stall due to the heavy CPU hogging that this synth claims over your system, and just to put that in perspective this was tested on an iMac dual 2.8GHZ Core 2 Duo with 4gig of RAM in Logic 9. It does state with this that they are currently working on this and should jolly well hope so too! I did find turning off the animated modulation on the dials helped keep things a little more under control.

Price
The full version of Aalto is available now for $99

Matt is a sound engineer, musician, and academic lecturer. You can find him here.