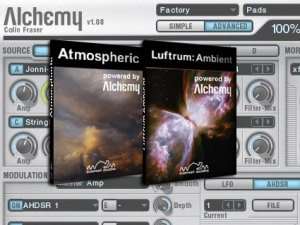 In this second part of the Alchemy sound library reviews, I spent some time exploring two more of the nine libraries of presets from Software company Camel Audio: the optional additions to the fantastic software synth, Alchemy (if you don’t have the full synth, each soundpack comes with a player included free).
The two libraries I tried out were ALCHEMY ATMOSPHERIC, and LUFTRUM: AMBIENT. Over both Libraries, the sounds are superbly manufactured. They are heavily weighted on the Pad/Soundscape/effect side of things, and so there is plenty of swirling, evolving sonic goodness to plough through. And as with the last soundpacks reviewed, the addition of Alchemy’s excellent performance section means that each sound is easily and dramatically manipulated for variation. Across the board it’s fairly instant sonic gratification. For a composer who needs to work under time pressures, having that variation at your fingertips is extremely useful. But for those moments when you’re just noodling and looking for that sound; hours of inspiration await.
Look to the first half of this review to see a deeper explanation of the Performance element to the Alchemy synth, and libraries.

ATMOSPHERIC
Atmospheric is a collection of presets from a veritable who’s who of contemporary sound designers. The list includes luminaries such as Richard Devine, Ian Boddy, Junkie XL, and John Lehmkuhl to name but a few. In preset size, it’s a tiny bit larger than the other packs out there, weighing in at 190 sounds instead of the usual 150. Of course there are deep variations for each sound using the performance element of the synth (or Player), making a grand total of 1520 variations at your fingertips.

The title is very aptly named – The collection is aimed squarely at the ambient sound designer. The library consists almost entirely of Pads, Soundscapes and Sound effects: the smattering of strings and vocals included are in a complimentary or similar vein.

Noting the all-star sound-designer cast, it’s not surprising that the sounds are all rich, deep, inventive, and very useful for the music they’re designed for. The pads are varied, ranging from blissed-out, hazy, warm waves, that reminded me a lot of early Chicane stuff, to bell-like tones, or some subtle rhythmic pulsing in the midst of the sound, and to some darker, more mysterious pads. It was interesting to see how the different designers used the performance section – some of them tended to use them to change the sound subtly, by slightly changing the cutoff, or lessening the reverb, whereas others preferred to shift the sound into a very new direction with each of the 8 sections.

The 39 sound effects make judicious use of the powerful synth engine under Alchemy’s hood, turning samples such as duck splashes and squeaky garbage truck tires into a spacey bubbly wash of sound. The FX section contains plenty of arrhythmic looping evolving sounds that have esoteric titles such as ‘cartoon time’, ‘kitchen sinks’, and ‘circuit bent banjo’. Really inventive sounds here; glitchy, metallic, blips and squeaks. I noticed one preset by Richard Devine that’s entitled ‘Whishart voices’ (perhaps a reference to Trevor Wishart?). It contains samples of a lady’s voice scratched up on a record player, maybe some trickling water, and a forest, and creates a bustling sound with a lot of bubbly personality.

Here’s a track from the Atmospheric soundpack. All the sounds are from the library apart from the kickdrum, provided by Samplemagic.

There are 61 soundscapes straddling the fence between the pads and sound effects, by blending the tonal washes of sound with generally more subtle fx loops, gestures and sweeps overlaid. Sometimes the sound morphs from a simple pad into sound effect. There is generally enough control of the presets to determine the balance between the two, and how intense you want the FX sounds over the top of the pads to be.

“Luftrum: Ambient is a journey between worlds, from summer afternoons to the icy depths of space. With dense washes of warm, shimmering pads and soundscapes, gentle guitar and piano arpeggios, music boxes, delicate, and ethereal sound effects that totter between beauty and despair, this is a particularly inspiring collection for the ambient musician, film, TV or game soundtrack composer. Its darker elements include chilling machine sounds, disturbing alien atmospheres, the voices of haunted children, water droplets, plus a sprinkling of the avant-garde.”

This is a very apt description of this soundpack, that can be found on Camel Audio’s website. I’m not sure I could put it better myself. Consisting of 150 sounds, with 1200 total variations, this sound library is a little more well rounded than the atmospheric library, at least in terms of diversity of instruments (i.e. there are some bass, keys, arpeggiated, and looped sounds included with the pads, soundscapes and sound effects). All are created by the respected sound designer Luftrum, who has designed for other manufacturers such as Propellerheads.

Of the four packs that I have reviewed over the last few weeks, I enjoyed using this one the most. The presets were inventive and creative, and as the flowery bumf on the website suggests, there is a lot of sonic diversity at your fingertips, to create very varied worlds. From ambient, downtempo, to dark and cinematic, pushing over into more electroacoustic experimental sound design. There’s plenty of sampled material in use here, from water droplets and forests, to squeaking puppies, swishing horse tails, and the seashore. All of these samples blend in well in the presets, and are malleable enough within the synthesizer to enable the creation of either natural soundscapes, like an evening garden soundscape, or a shimmering tonal pad. One sound that particularly stood out was ‘hug the old tree’. It was almost like a track in itself, the amount of variation that could be achieved just from that preset. A lot of shimmering noisy pad provides the foundation, upon which are a hint of female vocals, with a touch of glissando harp that appeared every now and again. This combination produces a beautiful thick sound. Moving the mouse around over the performance pad, the vocals would shift pitch over the pad, creating harmonies or dissonance depending on where you placed the mouse. Here’s a video of that sound in action. One chord is played throughout.

Here’s a track that utilizes the same sound. It also showcases some of the more natural soundscapes available in this library.

Camel Audio have provided rich libraries of sound that live up to their claims. Once again I would highly recommend them as useful additions to the genre they’re aimed at. Also, I’d recommend checking out the full version of the Alchemy synthesizer – it has SO much more to offer than the free alchemy player included in the soundpacks, and has quickly become my go-to soft synth when I’m writing.

49 Euro for each soundpack (includes the Alchemy Player). Serial number protected, no dongle required.
To buy the soundpacks click here
A trial version of the full Alchemy synthesizer is available here.

..plenty of swirling, evolving sonic goodness to plough through