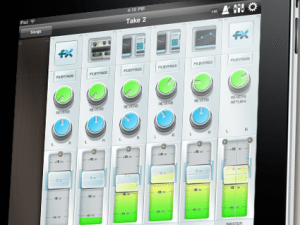 Yes, a full song created and recorded (almost) only using the iPad. This is a basic but very good example of how to use latest tech gadgets to actually produce something.
So why “almost”? Because the iPad in this case has been used mainly to track the vocal parts, bounce, etc, while the music loops were sent from a producer (that’s because, to use the author’s words, “the programs that actually do allow you to export the music track on the iPad makes you go through a total PITA process of using your computer to visit a website address on the iPad then download what you created…”).
Some DIY skills were needed for this project, and that adds some fun to the story. The main problems they had to face (besides the export/import issue we mentioned) were the input volume of the iPad (too hot and unfortunately fixed, at least until Apple does something about it) and the track number’s limitations (but hey, the Beatles did one or two good things even with a few tracks, isn’t it?).

Here’s an excerpt from the song:

On Bob Sandifer’s website you can read more about the project and listen to the song.
Actually Bob mentions that he has imported and cleaned the single tracks in Logic before the final mix.