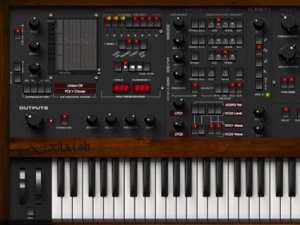 UPDATE: we’ve a special offer on PolyKB going on right now and for a limited time.

From the makers of the XILS 3 synth (see our review here), comes a remake of a classic French synth, the RSF PolyKobol. Only 30 of these synths were produced around the same time as the DX7 in the mid 80’s. The unique thing about the synth really was that one of its features, never heard on other analog synthesizers, was the continuously modulated waveform. This meant that you could literally sweep through different waveforms and have variations in fundamental tones rather than just choosing one type of oscillator like on a Roland SH101, or Moog. In fact there are very few synths if any that come to mind that could do this.

Check out the original PolyKobol in action here:

The PolyKB is a polyphonic subtractive synthesiser based on two waveform morphing, aliasing free oscillators and a self oscillating 4 poles low pass filter.Getting this software version of the Poly Kobol to produce the same effect as the original when sweeping through oscillators turned out to be no easy job (you can read more from the developers’ page)!

How does it sound?

The big question of course is how does it sound, and unfortunately, I do not own an original PolyKobol to do an exact A/B testing, but first impressions are important and I have to say I was immediately impressed with the diversity and response of the synth in many different types of applications.
Thundering bass, luscious pads, screeching leads and the more stranger set of sounds were all possible. I was of course instantly interested in how the continuos waveform selection would sound, which is set by the ‘waveform’ dial, one for each oscillator. It can be a pure triangle when turn left to a narrow pulse when turn right, but in a continuous way, you can set it to a saw, double saw or square wave form with all the intermediary settings. You can modulate this of course with LFO’s, Envelopes and more to get some extremely dynamic and textured sounds. Using the hard synchronisation between oscillator 1 and oscillator 2 means that each time the oscillator 1 begin its cycle, it forces the oscillator 2 to begin its cycle too, so when you modulate the waveform of each oscillator the whole thing goes crazy but stays nice and tight too.
Have a listen to both Oscillators being played together with the 2nd Oscillator being continuously swept from Triangle to Saw to Double Saw to Square to Pulse.

(PLEASE NOTE: some of these test files are quite “hot”, turn down the volume if you care about your ears!)

On to the filter! Yes the filter – just like the original PolyKB, there is only one filter which is is an accurate dynamic 4 poles self-oscillating low pass filter with an optional drive stage which can be placed pre or post the filter. This is a nice little touch and is an added feature that was not on the original at all and depending where this stage is placed, pre or post filtering you can get a subtle low-end enhancement or a sort of saturation effect.
The filter itself is great with no artefacts or stepping in the sound, so I found it to be really useful and at times really scary when used in conjunction with some high resonance!
The filter has its own dedicated ADSR(2) (although this can be assigned to other parts of the synth) and includes a loop mode, which means that as long as the note is held, the EG cycles from attack to release without staying at the sustain level – great for rhythmical kick drum effects! The PolyKB features two envelope generators (EG) of course with the first one dedicated to the output level stage (VCA) and the second is dedicated to the filter. But thanks to the modulation section, they can be used for a wide range of other purposes.

The PolyKB brings two Low Frequency Oscillators, used as a modulation sources, in the form of Triangle, Square, Sawtooth, Noise and Pulse or select them all at once for some crazy results.
Here is a Triangle LFO modulating the two Oscillators at various rates.

Again with the Noise source

And now with all of the waveforms chosen

Away from the nuts and bolts of the synth, the PolyKB features a complete modulation section allowing a wide range of sounds. This section has five fixed modulation sources, the LFO1, the Noise, the ADSR2, the VCO2 and Velocity. Added to these fixed sources, two user selectable sources are available. Thanks to the menu, a very wide range of sources can be chosen (ADSR1, LFO2, pink noise, sequencer outputs and much more). Each source can modulate five fixed destinations, VCO1 and VCO2 levels, VCO1 and VCO2 wave and the filter frequency. Added to these fixed destinations, there are four user selectable destinations. Thanks to the menu, a wide range of destinations can be chosen (VCO 1 and 2 levels, Filter resonance, ADSR parameters, LFO1 and 2 rates, and much more).
Programming the modulation is very easy: a switch connects a source to a destination, while a knob sets the level of the source signal.
Modulating the wave parameter of the oscillators is very specific to the PolyKB. A large amount of modulation can act as a morphing between waveforms (from triangle to pulse). While a small amount, of modulation is quite close to the standard pulse width modulation, depending on the wave setting.
In my opinion it is modulation that really sets some synths apart from others. Yes the oscillators are important and usually dictate the sound of the synth but the modulation capabilities really makes the synth what it is and this is not far off from becoming one of my favourites. Multiple waveform LFO’s, Looping Filter EG, and pretty much un-restrictive patching across all sources and destinations is exactly what the doctor ordered!

The PolyKB features a simple but very useful arpeggiator. When on, this module reads the note hold on the keyboard and, instead playing them at the same time, it will play each note after the other. There are three modes available: Up, the notes are played from the lower to the higher. Down, the note are played from the higher to the lower and Up/Down for which they are played backward and forward. If none of these there modes are selected, then the notes are played in a random order.
The cycle can also play through another octave before restarting when the Oct switch is selected.
Great huh? However, put this to one side for a minute and lets look at the other ability to sequence notes using the in-built sequencer! The PolyKB has a powerful polyphonic sequencer that can help you to create complex sequences and incredible special effects.

First thing to know, this sequencer is polyphonic. That means that you can record/play up to 8 voices with different sequences. The switch Voices Select allow you to choose which voices will be recorded or played. When both record and play are selected, then you will hear all the already recorded voices while record only the selected voice.

This ‘old-skool’ style of sequencing took some getting used to for sure as there is no undo and the notes cannot really be moved once they are played in unless you play them again! However I found myself having lots of fun working just inside the synth with this and the available modulation parameters. As the output values of the PolyKB’s sequencer are hidden, it can perhaps be a little confusing at first. But the power and versatility of this concept, in contrast to most other analogue sequencers of the time, is a good reason to get to know it!
Beneath the sequencer lies more fun in the shape of a ‘Stereo Space Positioning Module’ which allows you to position each available voice inside the stereo space. Click on a voice inside the 2-D positioning screen and move it. You can put it left, right, but also far or close to the two simulated microphones. These microphones have a cardioid pick-up pattern and can be oriented thanks to the Mic knob. They can also be moved to get a wider or narrower stereo effect. In order to have some fun with this, you must activate the ‘Stereo’ switch in order to allow you to hear the panning effects going on.
Another addition to the synth is the appearance of built-in effects which come in two flavours – Dealy and Chorus, both with parameters to effect feedback, rate and Dry/Wet.

Getting around the synth is simple and the actual interface looks great – nice and big and Xils-Lab have done a great job modelling both the look synth on the original. There is a dial for pretty much everything, (which I much prefer) although to increase the sound design possibilities, six menus have being added, two for the sources, four for the destination, which are pop-up lists, but these are quick and simple to use, straight off the interface of the synth. Adjusting any parameter is done obviously with a mouse or midi controller, in fact my mouse wheel is automatically assigned to control any dial it hovers above. Need to fine-adjust anything? Then just right click and move the selected dial in much finer increments.
This is ultimately a fantastically versatile synth, backed up by some old-skool ways of programming and a great sound engine. It has become a favourite of mine over night and I cant get enough of the on-board sequencer and the diversity of the modulation parameters. Everything is there in front of you with a large and easy to use interface which will leave you wanting to know more about the original.

Price: €149.00 (including tax). An iLok or eLicenser dongle is required.
PolyKB is available as a plug-in for Mac OSX, Windows in RTAS, VST and AU (no standalone application).
A demo version (dongled and dongle-free, with some limitations) is available here.

This is not far off from becoming one of my favourites

Matt is a sound engineer, musician, and academic lecturer. You can find him here.