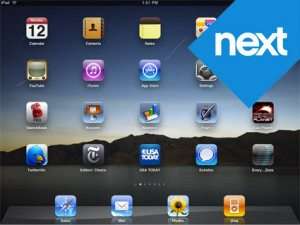 We’ve joined the 2010 edition of NEXT, one of the most important networking and trend conferences within the European web and IT industry. As you could expect, the iPad has been a main topic, and one of the speeches (actually the final one) made a few points about the current and future state of software development for the new Apple device.

Marcel Hastenteufel and Rainer Sax (from SinnerSchrader) were quoting Phil Schiller (senior vice president of worldwide product marketing at Apple) “the iPad is not about the features, it’s about the experience!”, to show that actually this experience is just not here yet.

One of the main issues of the existing iPad apps is the fact there are no rules, no standards regarding their interaction design and what should happen during the interaction. In a way, it’s like the web was 15 years ago, before most of the browsing conventions we’re now used to were born.
Using a few apps as reference, Hastenteufel and Sax proposed that a good iPad interface needs to

Most of these points made by Marcel Hastenteufel and Rainer Sax are valid. As mentioned often here on ANR, I hope that (especially for audio/music apps) we’ll start getting less and less real world-inspired interfaces. It really makes no sense to try to turn a knob on a touch screen! And I’m sure that in the next 6 months we’ll start having some clearer interaction standards, which are definitely needed.
That said, it has to be considered that most developers have only just started working on this new device, so it’s not surprising to see such poor interaction design results in these early iPad apps. The future looks bright for this new shiny gadget; so stay tuned…