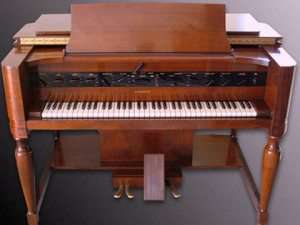 Laurens Hammond, best known for his B3 tonewheel organ, was a prolific inventor. Amongst other things, he created what is widely considered the world’s first polyphonic (72note) synthesizer, in 1939. It didn’t do well for a variety of reasons, mainly the onset of war, but also perhaps because it was more expensive than the average cost of a house. The Novachord was used extensively in the film industry. If you listen out, you might hear it in ‘Gone with the Wind’, ‘Hawaii Five-0’, ‘The Ten Commandments’, ‘Rebecca’, and ‘The Twilight Zone’ tv series. It is a beast, and contains 163 vacuum tubes, over 1000 capacitors, and miles of wiring. It must have been an absolute nightmare to maintain, and is therefore one very good reason to check out the new sample set from Hollow Sun, before considering purchasing the real thing.

Hollow Sun’s K3 Novachord library consists of 120 instruments, and weighs in at just under 550 mbs of samples, all taken from Novachord #346, currently residing in a studio in Bath, England. There are three versions available – Kontakt, Reason refill, and EXS samples.

I tried out the Kontakt version, as that’s the sampler I use the most. Each patch contains a high, low and allpass filter on the front panel, in homage to the original Novachord, as well as attack and release knobs. The creators of the sample set said that aside from a few tuning issues on the notes, they wanted to keep the sound as authentic as possible. So all the effects on the front end of the Kontakt instrument are on the original synth. They even sampled every note, in order to retain the particular characteristics of each circuit.

It’s immediately obvious from the first browse through the sample set, that the unique character of the original instrument is portrayed throughout, and to an excellent standard. I couldn’t hear any discernible glitches or weird loops on the samples, which is all the more impressive knowing the engineers recorded the Novachord with its own vibrato, to retain more facets of the original sound. Looping vibrato is not easy, but I couldn’t hear any skipping. Very nice.
The advertising for Novachord claimed (back in 1939) to be able to re-create all sounds of the orchestra. Now while this is completely untrue, there is a fairly wide range of timbres and other sonic qualities throughout the set, all retaining that distinctive Novachord sound. Plucked, percussive, bell, and pianoesque type sounds are all there. To me, the real strength of the set is in the lush pad and sustained string patches. The sampling of each note means that all the uniqueness of each analog circuit is captured, resulting in slightly varied harmonics and (small amounts of) noise depending on what particular note, or chord you play. This creates a very organic sounding sampleset, that immediately evokes nostalgic trips back to those classic 60’s Sci-fi B movies we’ve all loved to watch, and the slightly eerie drifting tritone pad sounds that preceded the entrance of the Man-eating Rhodedendron from Venus. As I was playing the instrument, that was immediately where I thought the synth would best fit – in soundtracks, to create those otherworldly (and perhaps nostalgic) atmospheres. However, that’s just my opinion, and I know you’re only limited by your creativity as to what you use it for!

Playing around with the synth, I got down a quick track to show some of the soundworld the Novachord is capable of creating. Everything bar the drums is from the Novachord soundset, with no effects added.

Hollow sun’s Steve Howell and Dan Wilson have done a stellar job re-creating the sounds of this vintage synth behemoth. The rich analog weirdness of the Novachord is expertly captured, and adds a great new element to every keyboardist/composer’s sonic arsenal.

All the uniqueness of each analog circuit is captured…