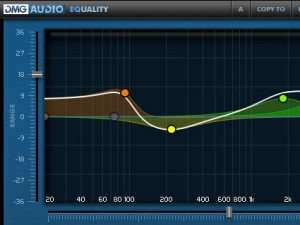 The plugin market toady is fairly saturated. Here are some plugins (new, or not so new, like Toraverb) that stand out from the crowd, with a balance of value for money, combined with that little something that sets them over some of their competitors…

DMGAudio’s creator, Dave Gamble, has worked for prestigious Pro-audio companies for most of his career, such as Focusrite and Sonalksis, on most of their major product line.
With the EQuality plugin, Gamble’s aim is to make the ‘only EQ you’ll ever need.’ Pretty ambitious stuff!
EQuality is certainly an excellent step towards achieving such high aims. From the outset, it’s a very good looking, easy-to-get-around GUI. It’s a 6–band Parametric EQ, with additional high and low pass filters.
Straight away, I found the sound quality is very high, and as of last week (10th april), has been further improved, with a tweak to the highpass filters. The low consumption processing power lives up to the creator’s claims, and doesn’t drain. The plugin is fully automatable within your DAW of choice.

There are several elements to the EQuality plugin that you might only find on higher-end EQ plugins, that make it stand out from the competitive crowd. The auto-listen function is very useful: as you select a band with the mouse, the other bands are all automatically muted until you let go of the mouse button. VERY useful when you’re looking for that renegade frequency to remove.
I also liked the frequency shift slider – you can move all the bands frequency points at once, saving you a potentially large amount of time. Also, the frequency range slider allows you to increase or decrease the full eq range to increase the response of the EQ – again a useful time-saver.
There’s also a good quality and fairly responsive spectrum analyzer, which sits directly behind the EQ, so you have a clear visual representation of how your tweaks are affecting the sound.

Here are some additional features as advertised on the website:

The only slight niggle I had with the plugin to start with, is with the presets. There aren’t many of them, but as you tweak and mess, they get saved automatically, which means that you lose the original presets. Not to matter, as it’s so easy and intuitive to create your own useful presets.

Compatibility: EQuality comes as a VST, AU and RTAS plugin, for Mac OS X and PC.
Price: It’s normally priced at $150, but there’s a 25% discount until the 20th of April, which will set you back $114 – a very good price for such a workhorse EQ.
Check out the website for more details.

Syntorus is the latest plug-in from D16 group, and it’s a double analog delay line chorus, designed to provide the user with, “..a rich analog chorus similar to the effect found on classic synthesisers like the Solina, Synthex or Juno.”
The plug-in is built around two delay lines, each syncable with the host. Each delay line has the same self-explanatory parameters to tweak – Depth, Offset, Waveform, Stereo Phase, and Volume. That different waves are available is nice – creating the possibilities of both warmer sine-based modulations, and harsher, brighter triangle or square wave modulations. They both sync to host tempo, so in extreme forms can create some nice rhythmic patterns not normally possible with chorus effects. The second delay line can sync up with the first, which provides an even tighter cleaner sound if necessary. There is a BBD (Bucket Brigade delay) button, which (at the cost of a little CPU) takes the sound from clean and precise, to warmer, and fuller.

Emulating an (unnamed) high quality analog delay line, Syntorus is designed to give that warm vintage chorus sound, and I think it delivers well. I’m not one to use much chorus on anything. But I have to say that I was very impressed with the sound of this one. It really could be used to subtly add warmth and width to the sound. It could also create the wacky detuned mess that I normally associate with chorus effects.
The low cost of this plugin makes it an absolute steal (see below for more info), for the versatile and rich sonic palette it can produce. Syntorus is definitely recommended as another tool for sound design tweakery.

Toraverb is a reverb that takes a slightly different look at the usual reverb setup – it is based around ‘early’ and ‘late’ reflections, instead of just one reverb with pre-delay. Both sections have their own parameters, such as EQ, SIZE, and ATTENUATION. The late reflections have a couple of extra parameters, namely the FEEDBACK, which gives you the length of decay, in seconds.
There are parameters controlling both of the reflections, with BALANCE, PRE-DELAY, WET/DRY mix and a MODULATION function. Some of these parameters are slightly atypical, and can create some really interesting effects. The Balance plugin gives control between the balance of early and late reflections. You can have entirely one or the other, and any balance in-between. The modulation control was perhaps my favourite aspect of this plugin. It adds slight modulation to the reverb signal, giving the tail a slight ‘wobble’. I’m not sure if it’s supposed to be emulating something analog, but it adds something extra, bringing extra life especially to drone, or pad sounds.
I like the reverb – it provides a different sound to other reverbs I use, and the way it’s set up makes you think a bit about how you use reverb, which could be really useful when you want ideas to freshen up a stale mix, or sound. If you were looking for a huge hall setting, then you’d probably be better off using a decent convolution reverb (Altiverb, Space designer for Logic, etc), but for more effect-type uses, and creating rich ambiences that makes sound really stand out, this reverb is brilliant, and an absolute bargain!

Compatibility: VST, AU, for Mac OS X and PC.
Price: Syntorus and Toraverb are part of the Silverline bundle, a selection of 6 plugins for mix and sound design, at a price of 169Euro (or roughly $230 at today’s exchange rate). They can also be bought separately, for the ridiculous price of 35 Euros (just under $50)
Check out more details on the products here