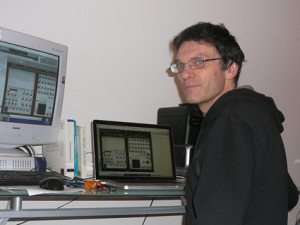 XILS-lab is a new French company, focusing on virtual instruments with an analog touch.
A few weeks ago we’ve reviewed their first release, XILS 3, a synth inspired to one of any synth lover’s wet dream, the EMS VCS3.

EDIT: we’ve just partnered with XILS-lab and they’re offering a special deal to ANR readers, 25% off the regular price. Get XILS 3 at 111 euro, click here to read more…

While I’m usually not too keen on the emulation trend, I have to confess XILS 3 is really a brilliant and inspiring musical instrument. It captures the spirit of an age where unpredictability and non-linearities were the norm, adding all the goodies you would expect from a modern software. Mission accomplished!
We’ve asked a few questions to Xavier Oudin, the man behind XILS-lab, read on…

Hi Xavier, would you like to tell us something more about your company?

XILS-lab, based in Grenoble, France, is a music software company I started around the end of 2008.
Having developed some of the best-known virtual instruments and effects on the market for Digigram, Arturia and various companies over the past 20 years, I’m now bringing my passion for music, audio, sound and instruments to my own company.
In order to make top quality software, I decided to work with highly qualified professionals, including Yannick Bonnefoy (graphic design) and many other musicians and sound designers. I think of these collaborations as a sort of expertise network for music software creation. XILS-lab is a node of this network, where I can focus on my main job, the development of new products and concepts
For all the commercial and marketing aspect of its development, XILS-lab works with Michael Logue from MiiM Corp for North American and Ian Morton from Smart Distribution for the European zone.

You mentioned that you worked for Arturia. Why did you leave? Is there something about the synths you helped develop that you’d like to change today, if you had the chance?

After more than 6 years of working for Arturia, I felt that I was always doing the same things and I wanted to achieve something else. So I decided to leave, and began working on this new adventure. After some time spent developing effects with Eiosis, learning a lot about filtering algorithms, I came back to my main passion, synthesis.
My time at Arturia was quite a while ago. They’ve since released new versions and I can’t say anything about their products now.
XILS-lab algorithms are based on important improvements of some well known algorithms, different from those I used when I worked at Arturia.
That’s why the sound is not the same, even if something of the same spirit can be shown.

Making the XILS 3 (inspired by the VCS-3) and now the PolyKB (based on a more obscure eighties synth called PolyKobol), it seems you enjoy challenges.
Why do you think nobody has tried to re-create such beasts of the past and what do they have to offer that can’t be replicated by more modern synths?

Challenges are what keep us awake and vibrant. So yes, I enjoy the challenge, especially when creating musical instruments which have never been remade, or that have been realized without enough features to make them all they could be.
There are already some other soft synthesizers that have been created, based on the VCS3/AKS architecture, and the challenge for me was to keep its very special and acclaimed character, which is so difficult to reproduce in the digital domain.

With the polyKobol, things are different; The RSF synthesizer was the only analog sound machine capable of a creating a modulated morphing waveform, creating wonderful new sounds. The challenge was to recreate this specific oscillator in the digital domain without aliasing, keeping all the modulation and synchronization features as well as its warm and big sound.
By the way, I’m not sure RSF and Kobol was that obscure – J.M. Jarre used 8 connected Kobol expanders for his China concerts, it was only the polyKobol that wasn’t well-known due to the factory problems RSF had.

I have a love-hate relationship with your XILS 3. While I love its organic and lively sounds, I really find the matrix too small. Do you think a future release could offer a different GUI approach?

The size of the matrix seems to be a problem for some users and this will be addressed in one of the next updates. A first obvious method should be to increase the overall size of the XILS 3. For those who work with high resolution, this could be more comfortable. Other GUI approaches could be taken if this doesn’t work.

While reading up on the history of the VCS-3, i noted that the synth was famously inconsistent, especially in the reproduction of sound – it seems that it was almost impossible to re-create the exact same sound. What about adding some sort of ‘inconsistency’ element to the architecture of XILS 3? Like a selection of ‘broken’ patch pins, for example?

Adding some more drift or creating a special keyboard follow to detune it in a sort of random way could be interesting. While I want to keep the sound and the character of analog synthesizer, I don’t think there is interest in keeping some of the more disagreeable things. For example – emulating the time a analog synthesizer has to be powered up before being used correctly and in tune with their other plug-ins wouldn’t be appreciated by users.

Now that most classic synths of the past have been covered, I’d actually love to see skilled developers working on original concepts, possibly more performance oriented (i.e. with a less traditional GUI). What’s your take on the touch-based synths developed for iPhone, for example?

I developed some programs for iPhone and began to adapt a synthesizer for this platform. I think it is a funny controller, but the available CPU power doesn’t allow a very wide range of possibilities and keeps the application on the toy side.
But I agree that the way programs are controlled by the iPhone, especially using a touch screen and an accelerometer, is very interesting. When more powerful computers get these kinds of control parameters (a 19 inch touch screen and an accelerometer wireless mouse for instance, or better some sort of sensitive gloves) things will be different.

About classical synthesizer VS new oriented sound machine, I think both are important and are worth developing. Each classical synthesizer has its own character and is a source of inspiration for the user. There are a lot of machines waiting to have their chance to inspire creative people: we just need to make their best features available again, setting their issues aside.
But I’m thinking of a new plug-in with a totally new approach. I just need the time to improve the concept and develop it, keeping in mind my main purpose: creating an easy, powerful and inspiring musical instrument for musicians.

Which are the artists (just a few names) and musical genres you’re into? And how, if it happens, do your musical passions influence your products?

I love classical music, especially Schubert, Mozart and Brahms, but when I was younger, I enjoyed listening to Pink Floyd, Zappa and Ange. It was also during this time that synthesizer sounds grabbed my attention, with Tangerine Dream and Vangelis.
Much more than my listening interests, I found that playing the clarinet for years led to my understanding that the synthesizer IS a musical instrument, provided its sound keeps freedom, and influences the development of my products.

What are the weirdest/funniest requests you’ve received from users?

I never receive very weird requests from users; it’s usually requests that I can’t achieve, involving CPU power or GUI possibilities.
For instance, one request was for getting the XILS 3 reverb polyphonic, which would mean getting 18 instances of the reverb running all the time (due to the tail, it is not really possible to disable voice after the note off). Another was a request for a total polyphonic sequencer including the clock management (for sequences with various clock speeds and step numbers running at the same time). This would be funny, but creating a GUI to make it easy to use would not be so obvious (although I may keep this idea in mind, to maybe offer a part of this feature for a future version of the polyKB).

Maybe the weirdness comes from myself; a musician once told me I’m insane…