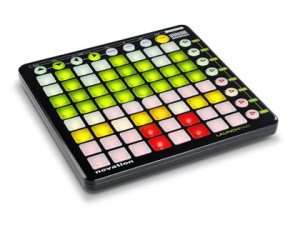 Third and final part of our Novation Launchpad special: in the first two articles we asked a hacker (Matt di Fonzo) and an artist (Madeleine Bloom) to share their thoughts on this new (and already popular) device.
In the meantime, we had the chance of spending some quality time with it, and here’s our Launchpad review…

As said in our Sonic Joy Awards 2009, the Launchpad it’s a perfect match for Ableton Live. It works, and it makes the whole Live experience much better (especially if you’ve only used mouse+keyboard till now).
Setting up the Launchpad in Live is foolproof, and the 4 pages Getting Started printed document is basically all you need to know to start playing with it.
The controller comes with a special (free) Live Launchpad edition on CD, but if you have a license for Live 7 (yes, you can use that one too) or 8, you’ll just need to install the device drivers.

The Session Mode is where you’ll probably spend more time, it lets you launch clips or entire scenes without having to look at the screen. You can easily move through your session with the pages buttons, and the focus on the screen (and the pads on the Launchpad) change accordingly.
Simply brilliant. It really feels like a natural extension of Live. 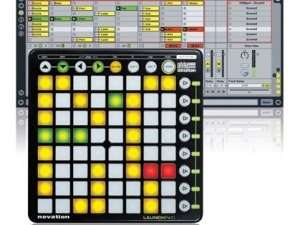 The User 1 mode lets you play the Launchpad pads as you would on a normal pad controller. It can be used to trigger some virtual instrument (like the Drum Racks or a third-party one) or to assign the pads to any MIDI parameter.
Just keep in mind that playing beats in real-time is not the Launchpad’s main purpose, the pads’ action is not made for that (too “long” and a bit hard), and you’ll get much better results with a proper pad controller (going from the cheap AKAI LPD8 to to more expensive ones).

The Mixer Mode is a little bit trickier (but after awhile you’ll get used to it). It lets you use the Launchpad to tweak (or activate) tracks’ parameters like Volume, Pan, Sends A and B, Solo, Stop, Track Activator, Track Arm.
Since the Launchpad is all about pads don’t expect smooth volume changes, like you would get with a fader.
The other Mixer Mode functions can be useful at times, especially if the Launchpad is your only external controller.

If you got Live 8 and the MaxforLive extension, the Launchpad can be used to work to control M4L patches (some are already out, many more are coming, there’s a lot of work going on in the M4L community at the moment – and you can build your own patches, of course).
Check also Novation’s beta version of its M4L Step Sequencer (downloadable for free here). It’s a monophonic, simple but well-conceived sequencer. Just couple it with an organ, choose an appropriate scale, and you’ll feel like Terry Riley!

Since a few weeks, there’s a new M4l patch/hack that lets you use your Launchpad as a monome emulator inside Live/MaxforLive. It’s called monomeemu (downloadable here) and supports all the apps that have been developed by the monome community.
Just drop it on a Live’s MIDI track (just once, even if you’re going to use several monome apps they will just need one monomeemu instance), then drop the monome app you need, add your virtual instrument of choice and you’re done.
All this inside a Live channel, without complicated routing or such things.

I’ve tested a few of Stretta’s apps (those recently ported to MaxforLive, downloadable here) and they seem to work fine. I say “seem” because my test in this case was not so extensive as it would need.
Sometimes, especially when running more monome apps at the same time, the Launchpad seems to be a bit laggy. This is probably due to the fact the emulation involves an OSC to MIDI conversion (monome is OSC compatible while the Launchpad is only using MIDI).
Considering monomeemu is still young (0.93 release), I have good expectations about this project for the next weeks/months.
That said, we’re talking of some advanced features here, so you’d better have some patience and a well-performing audio+computer setup.

Until a few weeks ago nonome (read also our interview with its developer) was the only hack that could let you use a Launchpad with monome apps. The whole thing is still valid (nonome can be found here), and, if you are not an M4L user, it’s still the only way to go.
You need to get the free Max runtime (downloadable from this page), and some monome app, like those mentioned.
Then it’s up to you: as sound generator you can use a standalone virtual instrument, or some hardware synth/module/drum machine connected via MIDI.
This setup is a bit more complicated (and could involve a higher latency) than the one mentioned earlier. It would be almost impossible to list here all the possible variables. Please ask for help on the above-mentioned nonome forum thread.

Launchpad + Logic (or other DAWs)

The Launchpad it’s a MIDI controller, and as such can be used with other DAWs like Logic, Cubase, etc.
I’ve used it to create some beats with NI Battery in Logic, for example. It’s quite easy, you’ll just need to check the MIDI notes messages sent by the Launchpad and change the values on your virtual instrument pads.
On Novation’s website there’s a useful document with all the MIDI specs of the device, but it seems there are a few mistakes regarding the MIDI Notes output.
Here’s the correct layout, as seen by Logic (and I guess other DAWs too)…

The Launchpad can also make use of Novation’s Automap software. You’ll find the installer on the CD. Actually I think other Novation controller (filled with knobs, faders, etc.) do a much better job in that regard, so I decided to skip this step.

Launchpad + nonome + Logic (or other DAWs)

If you feel brave, you can also try setting up Logic with nonome and a monome app (I’ve used Stretta’s Polygome for this example). As said, you’ll need the free Max runtime to use nonome (the link for both is a few lines above).
Here’s a couple of screenshot of the setting I’ve used in Logic and in the monome Max patch (you’ll need to activate an IAC bus in your Mac’s Audio MIDI Setup panel first)…

The Launchpad, at 200$/180€, is a cool grid-based controller, perfectly integrated with Live. It can also be used to run monome apps, and I’d recommend getting MaxforLive to make the most out of it.

If you’re looking for an inexpensive, well-designed controller, that can let you “touch” your music while performing/composing, get a Launchpad. I’m sure you won’t regret it.