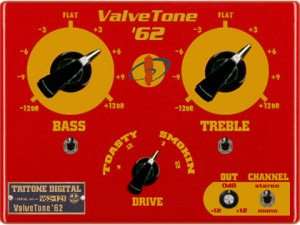 In the past I’ve had a love/hate thing with Tritone’s plug-ins: while they were very interesting from a sonic point of view (with a strong emphasis on being highly “musical” and easy to use tools), I did not like the fact they were tied to the Pluggo runtime. Basically they were wrapped plugs, never a good thing in my book.
A few years later the Pluggo platform has been declared dead by Cycling ’74, and this brought Tritone’s development to a turning point: they started developing Pluggo-free versions of their plugs.

And here we are, Tritone Digital is back in business with the first (re)release of this new, “native” (AU, VST, RTAS), series, Valvetone ’62, and with a new product, ClassicTone-PEV.

For those who don’t know what Valvetone is about, here’s something from the press release: “ValveTone ’62 is a unique, vibe-laden plugin that pays tribute to the EQs of yesterday; it’s all about silky sex appeal and incredible thick tone. Deceptively simple BASS and TREBLE controls provide boost and cut algorithms that are both complex and pleasing. The DRIVE control provides you with two completely unique EQ curves:Toasty, which provides warm, velvet-smooth EQ curves, and Smokin, which is more driven, colored and over-the-top. So, don’t expect some well-behaved Linear Phase EQ: ValveTone ’62 is all about character and TONE!”

The sound engine is the same of the version 1.0 (they just fixed a few things here and there), the new version can read the old settings (well done here), and, most of all, the plug-in is now 40% more CPU-efficient and loads three times faster. There’s also an A/B preset comparison feature, and it’s now possible to export and import your presets via XML.

The upgrade for Valvetone’s original users is 25$, while the full price is 85$.
Those customers who upgrade before 12/31/09 will also receive a free copy of Tritone’s newest plugin: ClassicTone-PEV.

Here’s what they say about this new Neumann inspired (ooops!) EQ: “ClassicTone-PEV is modeled after a unique vintage EQ that was made by a German audio company famous for its microphones. The PEV was the first EQ ever made by this company and was used for vinyl mastering.
The original PEV featured a totally passive and discrete design with transformer balanced inputs and outputs and extremely high quality inductors for each band.”

Important: the plug-ins are Mac-only compatible at the moment. They’re working on the Windows version, but there’s no scheduled release.