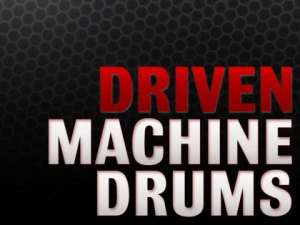 During the last couple of years we’ve seen some nice improvements in the drum machines sample libraries’ field.
The thing is there are hundreds of average sounding sample libs, so some smart developers have started introducing a new variable: a unique recording chain. We’ve had Hugo from Goldbaby with his lovely tape-recorded drums (see our Tape Drum Machines review), and now it’s the time to talk about a new developer and a new product: Driven Machine Drums.

Keep in mind that you won’t get a complete sampled version of each of these instruments though. Driven Machine Drums is all about a careful selection of sounds coming from different sources, well categorized (Kicks, Snares, Claps, Toms, etc.) and well recorded (also leaving headroom to the final user, a good choice).

I’ve tested the EXS24 version (other formats available too, see below) and while I’d like to have a proper PDF manual with all the info about the library (it should be available in the next weeks), the sounds and their organization makes this library a nice add for every electronic music producer.

Here’s what the developer, Nathaniel, told us: “I’m primarily a musician, producer and I’ve become very aware over 16 years of how my creative process works. I wanted the musician to remain in a flow state of pure artistic concentration while using the library. That is why I grouped the sounds by texture instead of machine. The name of the machine is “logical” info, while texture is a “musical” choice.
If a “deep kick” is working in a song, I didn’t want people to be forced to change directories from Vermona to Machine Drum, then find the kicks, then scan all the kicks until they find another deep kick. It should be as simple as going up and down the keyboard here, or scanning the deep kick folder in GURU.
Similarly, I didn’t want 250 kicks in one folder.  I tried the best to small chunk them in a musical manner”. It definitely makes sense…

The good news is that you can buy and test the entire collection for 30 days, with a full refund/no questions asked policy.

For those who’d like to try before buying, there are more than 100 sounds available for free here.

That said, talking of marketing and strategies, there are a couple of things that need to be pointed out: first, I can’t get how someone that spends so much money and time on a product like this, then chooses an ugly and definitely “anti-usability” website to promote it. I assume you’re working on it, isn’t it?
Also, and this is quite surreal since we’re talking of a digital release, the developer says “I’m only going to make 997 copies of this library available. Then I’m removing the library from the market. Why? I want to you to have an exclusive, limited edition library of designer drum sounds”.

Dear Nathaniel, you have a very good product in your hands, just promote and sell it for what it is, and forget about this VIP Club bull**it…

P.s: more stuff is coming (for free) for Driven Machine Drums’ customers. A whole new section of fx sounds, with filter, reverbs, flangers, should be released in the next days.