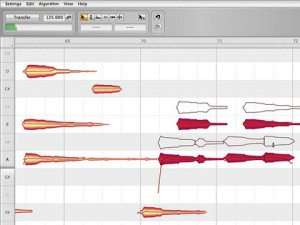 Melodyne Editor, maybe the most talked-about audio software of the past 2 years, has been finally released.
Melodyne editor is the first Celemony product to feature the DNA Direct Note Access technology, which lets you access to individual notes in polyphonic audio material). A demo version should be available soon.

I spent some time with the beta version, and yes, the DNA technology is actually quite impressive. As you would expect, this is not an instant gratification kind of software. It’s not easy to master and if I were you I’d keep the manual handy while doing the first tests.
Also, the audio program you feed it with can give different results depending on its complexity/recording quality.

Just one thing though: don’t expect Melodyne Editor will let you take a complete band recording and edit the guitar part or the bass, etc. It’s not meant to be THAT magic! Its purpose is to help (or experiment, which may lead to even more interesting results) with single polyphonic tracks, or polyphonic solo recordings (think of piano solo recording, etc.).
It’s a revolutionary tool, but it’s still a tool. It could prove to be very useful in some situations, especially when time and money are an issue, and it is a great tool to try out new ideas (actually, that’s the most interesting approach, at least to me).
That said, it should not make you stop taking music lessons or practicing a few hours a day, ok?

Melodyne editor runs under Mac OS X and Windows as a plug-in or as a standalone application. According to the company, “both the plug-in and stand-alone implementations of Melodyne editor boast numerous improvements over previous editions of Melodyne, including a very short loading time, a plug-in window the size of which can be varied at will, still further improvements in the note detection process and sound quality, and much else besides”.
Price: 349 USD/349 €