(This YouTube user, HALmotohashi, has some more interesting videos with the Wavedrum, check them out)

KORG has just introduced the KORG Wavedrum WD-X, described as a “Dynamic Percussion Synthesizer”. It’s a much more affordable evolution of the original Wavedrum (1994), which in the meantime has become a collector’s item.

An AudioNewsRoom’s reader, Rob DeLancey, has bought one in Japan (the Wavedrum has been launched there first) and has spent the latest three weeks beating, striking and tweaking it.
Here’s his Wavedrum WD-X review (by the way, this is the first KORG Wavedrum review on the web at the time of writing – at least in English -, so thanks for being an early bird, Rob!)…

Construction:
it looks like a toy in all the pictures I’ve seen, but the rim is made of metal and is actually really solid. They obviously payed attention to rim’s acoustic qualities as well as its structural qualities. The bottom is plastic, but the whole thing feels really solid.

Playing:
it responds enough like a real drum that different playing styles can elicit radically different sounds from it, and I would imagine that that would apply even more to different players.
Different programs can also completely change its response. Some are suited to playing with sticks, and others to playing with your hands.

Presets:
a lot of the presets are actually really good, but there’s a significant chunk where they apparently decided to show off what it can do, and wound up with something way too busy to ever be useful.
I also wish that there was a way to save edits to the presets, so I could go through them and turn off the delay on all the ones that have it. 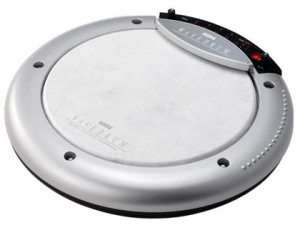 MIDI (or the lack thereof):
the first thing everyone starts yelping about when they see the specs is “OMGWTFLOLWUT…….   There’s NO MIDI?!?  In 2009!?!”
I think these folks are missing the point. For one thing, it uses the acoustic sound from the head and rim pickups as its basic input, so there would be no way to drive it with MIDI even if it did have it.
The only only thing I can think of that MIDI input would be useful for would be controlling the pitch of the pitched algorithms.
Even if they did put MIDI outs on it, the only MIDI data you could get out of it would be note on/velocity for the head and the rim, and one channel of CC from the pressure sensor. If you’re trying to integrate it with external effects, note on and velocity are pretty easy to simulate with an envelope trigger or an envelope follower anyway.

Personally, I have a lot of respect for their decision to make it an integrated whole instead of trying to throw in every feature that people are conditioned to expect.
If you want a MIDI controller, get the Roland Handsonic. It’s a great MIDI controller. If you want an instrument, get a Wavedrum.
There is, however, one thing I wish it did have some kind of I/O for, which I’ll get to in the next section.

Programming/patches:
It’s much easier to program than you would assume from the minimalist interface. Each sound consists of one algorithm, which has the actual sound from the pickup as its input, and one PCM sound, which is essentially a triggered sample. Each of these can be chosen separately for the head and the rim (there are also a few completely integrated sets, to simulate real instruments, where you can’t mix and match).
It’s possible to control the mix between the two, so you can use only the algo or only the PCM if you want to.
The algorithms have eight controllable parameters, but the parameters are different for each one. They generally seem to be really well chosen. It’s possible to make most of them sound remarkably like real instruments, but tweaking the parameters to extreme values can make any of them sound strange and electronic. The PCM sounds all have the same basic set of parameters available to control them.

The algorithms are all incredibly expressive, but it sometimes takes a whole lot of tweaking to get the PCM sounds to integrate with them without losing that expressiveness, so I tend to just turn the PCM sounds off when  I’m programming it. I’m not saying it’s impossible to get it right. Some of the presets are really well integrated. It’s just kind of a fiddly process. Even in the best integrated patches, I find that the scraping surfaces tend to sound better with just the algorithm sound.

This  leads me to the one thing I would actually consider a weakness: there’s no way to load patches. The only redeeming factor is that the patches are simple enough that it would be feasible to just enter a whole patch by hand, but it would only be worth it if you were sure you wanted it.   There’s no way to share patches on the internet so you can learn from what other people have done with it. It would be really nice if it had some kind of I/O.
This is honestly the only thing about the Wavedrum  that I don’t think is incredibly great, so it’s not even close to a dealbreaker, but it would have been nice if they’d thought of it.

Conclusions:
this is, hands down, the most expressive and subtle electronic instrument I’ve played. That title previously went to the Akai EWI 4000, but this one has it beat.  It actually feels, and plays, like a real instrument (at least with the right settings, anyway.  Some of the presets don’t strike me as particularly useful).
Considering that  it uses the actual sound from the head and rim pickups as the input for its algorithms, I think it should really be thought of more as an electric instrument like an electric guitar or bass than as an electronic instrument like a synth or a set of sample trigger pads.