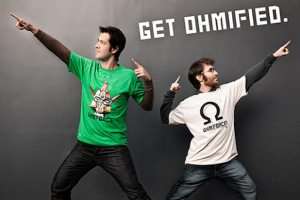 It seems to be the right time to “get Ohmified”, and no, we’re not talking of the t-shirts…

Usually Ohm Force newsletters are quite funky and surreal, it’s their style, you know.
Yesterday’s newsletter is actually very different, and it’s an interesting read even for those who have never heard (?) of this French software company.
Ok, the price drops will make many users happy, and it seems a reasonable move for a small company to stay healthy in an always more competitive market. Also, I kind of agree on the rhetorical questions they pose.

But the funniest thing is that this announcement comes just a few days later the Lexicon’s one about the upcoming release of their native plug-in (with a shiny 1,899$ price tag).
I’d love to see the Ohm Force guys and the Harman (owner of Lexicon, among other things) marketing managers at the same table. And then we could call someone like Terry Gilliam to capture the event!

Ok, let’s go back to the topic. Here’s an excerpt from Ohm Force newsletter:
“…Last year’s financial collapse has been like a worldwide earthquake and, in addition of all its global consequences, here at the Ohm Force headquarter it made us think a lot about how we’ve been managing our own activity as plug-in makers. And which directions we’d want to take from now. …
Even when talking about great effects, we do believe that audio plugins are not supposed to be something expensive, exclusive for those with big budgets. We don’t want to let Ohm Force’s effects become some more “plugins for rich people”, what started to happen specially from our American customers’ point of view due Euro’s recent big rise. A few marketing directors could say that there are still enough music producers with comfortable budgets in the world to keep the plugin industry going on but, at least for us, it wouldn’t be fun anymore. So why shouldn’t we go beyond the attractive pricing? Shouldn’t good software for make good music actually be affordable, still being a part of the huge revolution made by the computer based music production? Not only it’s time to ask ourselves these questions but also to take the initiative to answer them, instead of just waiting other people to do it.
So as an audio software company Ohm Force is doing its part and announcing: we’re globally reducing our advertised prices. And it’s not a promo: it’s for real and forever. We still do want to make money and be rewarded for our hard work: it’s still business, but let’s keep it reasonable…”.

Single plug-ins prices start now from 39 euro (single license, meaning only one platform supported: you can buy VST or AU or RTAS) or 49 euro (multi license, you get all supported platforms).
For those who want to have all, or almost all Ohm Force’s catalogue, the bundles are even more attractive: there’s three of them (All Live, All FX, All All) priced at 199/249/299 euro.

Students with a valid ID card get 50% on everything (and yeah, it keeps you away from those nasty sites, and lets you spend more time with your girlfriend/boyfriend!).
Last but not least, and this is unique to Ohm Force (at least, for what I know), it’s possible to split the payments in three times with no extra charges.

So, now you really have no excuses, go and download a demo of some of their plugs and see if they inspire you making better music. There’s a good chance you’ll end up buying something from them!

My only complaint: I’ve never been a great fan of Ohm Force’s visual interfaces, and the same can be said for the website. Dear Ohmies, it could be a bit easier/clearer, especially now that your prices are perfect also for “impulse buying”…