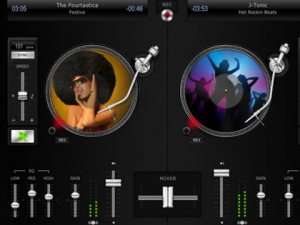 Djay, the Mac-only DJing software created by the German company Algoriddim, gets better with version 3 (or better 3.01).
Since its original release Djay has filled a hole in the market. There were already full-featured and complex apps like Traktor (and over the years more entered the arena: Serato, etc.) and so the German guys at Algoriddim took a different approach. They basically tried to make DJing software as easy and fun as possible, and, well, they succeeded… 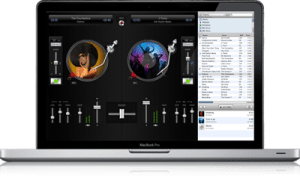 Djay is fully integrated with iTunes (so better keep things well organized there), has an easy-on-the-eyes and clearly laid-out interface, and it has basically no learning curve. I mean, if you know how a turntable/cd deck and a mixer work, you should be able to start mixing as soon as you start the program.
Very intuitive Cue points, Looping, Skipping, Sampler, Live Mix Recording, Microphone tools are just one or two clicks away.
I like the fact djay is a stable and quite light-on-the-cpu app. It benefits from latest Macs’ technologies but it’s definitely usable on PPC machines as well.
Other winning points: most of the features can be controlled via keyboard shortcuts and touchpad gestures (two and three fingers supported, and this has been improved in v.3), so you can get the most of it even without external controllers.

Well, external controllers add more fun to the performance, so I’d recommend getting one anyway. Djay offers native support for Vestax VCI-100, VCM-100, Numark Total Control, Omni Control, Stealth Control, and M-Audio X-Session Pro.
The great news is that the latest djay version adds (at last!) an important feature, MIDI Learn. Now “you can plug in your favorite MIDI controller and easily map all features in the software”. I’d suggest joining the company’s forum, to know more about these features.

With its latest version, and now that the basics are more or less covered, djay is also trying to offer more sophisticated on-the-fly tempo and beat detection tools. For those into scratching, Auto-Cut allows the user to scratch music in sync with the song’s beat and rhythm. To be fair, I’m not into it so I’m not the best judge in this case.

Among the new features of v.3 (from the press release):
– Automatic Tempo & Beat Detection: Easily matches two songs for a perfect transition;
– Auto-Gain: Automatically adjusts the volume of two songs to the same level;
– Beat-matched Looping and Audio FX: Spices up your mix with new stunning, high-quality effects;
– Auto-Cut Scratching: Lets you scratch like a pro in sync with the song’s beat and rhythm

If you’d like to get more experimental, yes, Audio-unit effects are supported, but in a limited visual form. You get just a generic interface with the plug-in’s list of parameters. Anyway, djay’s mixer has an embedded fx section (pitch shifting, reverb, echo), so also in this case it should be more than enough for most users. 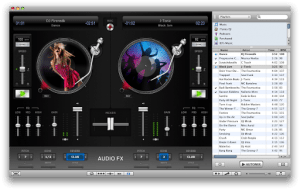 Other limitations? Well, I think djay’s strongest selling point could be, for some users, its weakest ones: you’re forced to use iTunes, there’s no graphical waveform representation of the track, its interface design could be a bit too hardware-like. But you know, you can’t please everyone…
Last but not least: to the Algoriddim team, you have a great app there, but I’d avoid claims like “the world’s sexiest DJ software” on your website. I think it’s far from the product’s winning concept/approach/profile.

That said, at $49.95 or EUR 39.95 (+ VAT) and with a 15 days demo (each session should last 30 min. if I’m not wrong) djay is definitely something to try. I like the fact it’s a simple and at the same time quite powerful solution, and I think both casual and pro users could find it rewarding.
I mean, unless you’re Ritchie Hawtin and/or you need to run four decks at the same time and do crazy stuff, if I were you I’d download the djay demo before getting into more complicated stuff.