At AES 2009 Waves was showing a new plug-in, called Vocal Rider. In their words: “Waves makes vocal processing easier than it’s ever been with their upcoming Vocal Rider plug-in (AU, VST, RTAS). The name says it all – Vocal Rider is designed to match your vocal tracks to the rest of the mix and then keep the relative volume throughout the song. All you do is instantiate it on your vocal track, bus a summed instrumental mix to the side-chain, and hit play. The plug-in fader then takes over, keeping the relative volume of the vocals and the rest of the mix constant. And, unlike compression, Vocal Rider doesn’t crush the dynamic range or color the vocal track at all.
Waves Vocal Rider Automatic Level-Riding Plug-in Features:
– Intelligent adjustment of the vocal track based on the dynamics of the music.
– Saves time doing the kind of automation you would have to do manually.
– Writes automatic volume riding to the track as automation for fine tuning”

The interesting thing is that Vocal Rider seems to be, uhm…. too similar to a PT plug-in released a few months ago by Quiet Art Ltd., a small developer from New Zealand.
That plug-in is called Wave Rider (things are getting funnier, ah?).

Here’s Wave Rider’s short description: “a virtual fader controller plugin for PT. It’s a unique RTAS plugin that detects audio signal level on the inserted channel, and controls the fader movements”. You can read (and hear) more on the official website, linked above. 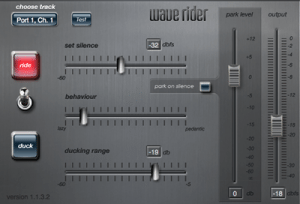 Ok fine, they had the same idea, you’ll say. Well, it can happen.
But here’s another fact, confirmed by Wave Raider’s developer: a license of Wave Rider was acquired by someone from the Waves team (after tying one of the earlier versions of the plug-in).

Wave Raider’s dev told us that “even the keywords they use to describe it (saves time, no color, you can alter the automation later etc) seem to be taken off Wave Rider’s site and forum’s posts.
There’s a couple of differences on how the plug-ins operate. The Waves one has an option to let you feed an external source to its side chain, and few other fine adjustments (reminding of some of the suggestions for Wave Rider on the DUC and Gearslutz forums) .
Also the Waves plug-in seems to write its automation within itself as a separate lane.”

I won’t enter into the legal aspects of the whole thing, also because Vocal Rider has not been released yet. It seems Wave Rider’s dev (like most small/one person companies, unfortunately) did not apply for a patent for his software, but I don’t know if (generally speaking) this is enough to make someone else jump on a product and re-release it just adding a few touches here and there.

We’re trying to reach Waves for an official comment. We’ll update the article as soon as possible.

In the meantime, we’d love to hear your comments about this story…