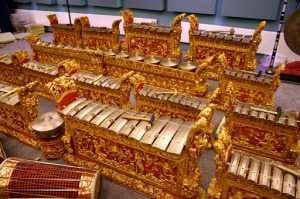 In our Sonic Joy Awards 2008 one of the awards went to Soniccouture for their huge and gorgeous Balinese Gamelan Professional Edition sample library. That 24 GB library will keep on being a reference product for many years, and it’s definitely a must for all those seriously into Gamelan and Balinese culture.
On the other side, given its size and the price, it could be a bit “too much” for some users.

Well, for those who’d like to start exploring the world of Gamelan, Sonicouture’s partnership with Native Instruments could be good news.
The new Native Instruments release, called simply Balinese Gamelan (Discovery Series) is actually a sort of essential selection of the instruments that make up a Gamelan ensemble.
It’s a 2GB, Kontakt 3 Player library and it does not require a full version of Kontakt (like Soniccouture own libraries do), or any other sampler, to run.
You just need to download the free Kontakt Player from the Native Instruments’ site.

So, what’s included in NI’s Balinese Gamelan? You get three sets of instruments (called Core Instruments, Gangsa and Kettle Gongs) which feature the tuned instruments (Gongs, Jegog, Calung, Penyacah, Ugal, Pemade, Kantilan, Trompong, Reyong) used in Gamelan ensembles.
A nice feature is that you can use them in their original pitch (and that’s the real sound of Gamelan), or in a more western-friendly tuning.
You get also some synth presets: loading these presets you can treat the Gamelan sounds as if they were a “normal” synth sound, that means you can tweak the cutoff, attack, release, etc. There’s also a Jammer option, which, if enabled, creates rhythmic arpeggio patterns. The interesting thing is that you can tweak also some of Jammer parameters, like speed, timing, velocity, etc. and assign them to MIDI CCs. That means fun! Try to assign for example the speed parameter to a knob or a wheel on your controller… 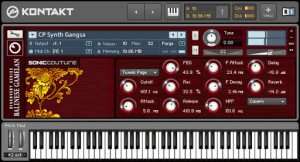 So, what’s missing here (compared to the mentioned Professional Edition by Soniccouture)? Well, since this library is 1/10 of the size of the Pro Edition they had to make some choices. The percussion instruments are not included, and the tuned instruments included in the package are of course a reduced version of the original one. Also, the sampling rate is 48khz instead of 96khz (well, that’s not a big thing anyway, unless you’re an audiophile…).

That said, Native Instrument Discovery Series Balinese Gamelan does all it promises. It’s an excellent introduction to Gamelan’s sounds, it is fairly priced (79$/69€) and it does not require Kontakt 3 or 4 (just the free player). And that’s a good thing, I think there are many potential users who just skip Kontakt-only libraries because they haven’t got the full Kontakt package to run them.
If you add the fact it can be a little tweakers’ paradise with its optional synth parameters, well, this is clearly a must of any sound-design lover.
Just a warning: if you’ll love this, I think you’ll soon start lusting for Soniccouture’s Pro Edition…

P.s.: a little note for those who did not download the free Kontakt Player yet. I found the whole thing a bit confusing, especially if you own previously Kontakt Player based libraries. After the install has completed its process, don’t look for a Kontakt Player folder or app. You would not find it.
You’ll find a folder called Kontakt 3, and inside the application is actually called Kontakt 3. Does it mean you have the full Kontakt? Yes and no, now Kontakt and Kontakt player are bundled together (and not two different apps like before), BUT you have access to the full Kontakt features ONLY IF you have the proper Kontakt license (so if you have a Komplete package or if you’ve bought Kontakt as a standalone product). Otherwise you can just use the Powered by Kontakt libraries, like the Discovery Series – Balinese Gamelan we’ve just reviewed. I hope this helps!