Eddie Kramer and Waves are promoting the recent relase of the Eddie Kramer Collection suite of plug-ins with a tour around the world. Yesterday the event took place in the Hansa Studio’s Meistersaal, known also as Studio 2 (this beautiful hall is a piece of history, here’s some info taken from a U2 related website), in Berlin.

You’ll probably know about the Eddie Kramer Collection: it’s a suite of five, rock and results-oriented plug-ins (Vocal, Guitar, Bass, Drum, Effects Channel). Each of them is a little “monster” plug, being a sort of complete signal chain fitted in one plug. Admittedly, it’s not new code. Eddie’s assistant for this event, from Waves development team, said that the underlying algorithms are mostly taken from previous Waves’ releases, just tweaked to mimic Eddie Kramer’s mixing habits (among his credits: Hendrix, Zeppelin, Kiss and too many others..). He also said some IRs from Eddie’s own outboard have been captured and the results have been used for these plugs. 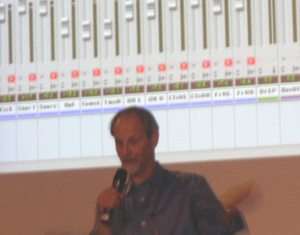 Eddie and his assistant, from Waves development team, showed the plug-ins in use in three different ProTools sessions (and different tracks). Well, the plugs sounded good, even if it was often not a fair comparison (there were strong volume differences between bypassed and “kramerized” tracks) and Eddie is definitely not a tech guy (“I’m a musician, not a technician”). So it was more a “crank it up, yeah, cool” kind of presentation, funny in a way, maybe not that helpful unless you’re easily going to get impressed. 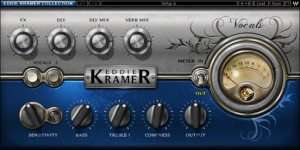 I have a love/hate feeling about these collections (there’s another release in the same Signature series, by Tony Maserati). They are excellent if you need to work fast and get good results (easy interface, few controls, etc.), but they’re not very flexible and definitely not a learning tool.
I would not use the Eddie Kramer Collection as a first choice to mix an acoustic pop or electronic pop song, and less experienced users could find hard to get what’s going on under the hood.
But, as said, if you need to work on rock’n’roll, hard rock, metal stuff, it can be an excellent and valuable product for many, since it lets you get some good-sounding rock tracks without too much effort, giving you a well-shaped sort of channel strip with a couple of clicks (well, unless you feed it with crappy recordings, shit in = shit out, remember!).

The presentation ended with a short Q&A session: among other things, once again Eddie confirmed his healthy “no rules” approach when it comes to mixing. Also, he said he works with both analog and digital tools (tape, PT, outboard + plugins), he’s well aware of the “loudness” problem in modern music, but he did not seem to have a concrete answer to this issue. He said also he’s working on some unreleased Hendrix archives, and that there won’t be surround edition of his music (thanks god!). Well, given his background we could have spent hours asking him questions, anyway spending a couple of hours with Eddie has been a nice and entertaining experience.

The Eddie Kramer Collection (native only at the moment, so AU, VST, RTAS) has a demo version on Waves site and is available in most shops at around 600$/430€. As for other products, if you buy direct on Waves site you end up paying much more (800$), so use Google and choose wisely.