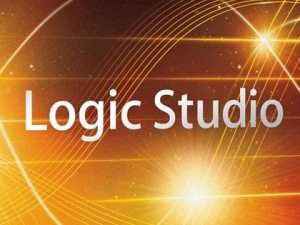 After months of speculations and rumors (you know, forums are made for that!), Apple unveiled the new version of Logic Studio, featuring Logic 9, at the end of July.
It could take months to give a complete picture of Logic Studio. I’ve spent a couple of weeks with the beast, and what follows is just the results of these two weeks’ test, focusing mostly on the newest Logic 9 features.

This time it seems Logic’s team tried to please both the engineer and the rock’n’roller inside of us. Let’s see why… 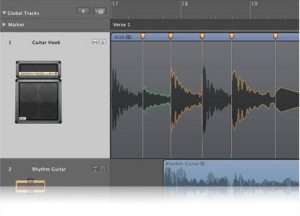 I’d start with Flex, a suite of tools to manipulate the timing and tempo of audio files. Admittedly, Logic was a bit behind its competitors in the audio manipulation area (the champions being still the guys at Ableton) and Flex is definitely a step in the right direction. It’s a powerful group of algorithms, able to deal with monophonic as well as complex and polyphonic programs, and it’s quite easy to use.
I’d suggest to read the Flex chapter in the manual anyway (by the way, if you’re looking for the Logic Studio Manual in PDF it’s here), it helps choosing the right settings and getting better and even quicker results.
I had excellent results with some brass tracks that needed some timing adjustments. Choosing the right Flex modes the quality of the compressing/expanding algorithm seems to be quite good, and I think this can be a huge timesaver for any Logic user.
Among my favorite workflow improvements I have to mention the Selective Track Import, Bounce In Place, Multiple Takes and Notes features.

Selective Track Import lets you import tracks from other Logic songs, yes, one by one, both audio and v.i. tracks, including their bus sends, automation, etc. This proved to be very useful in a couple of cases: I was working on some old Logic songs, and thanks to this new feature I was able to import all that I needed from the original song (including tempo signature, markers, bpm) without opening the actual song file. This means that I avoided the usual problems related to importing old songs (corruptions, etc.) and that the original song file is still untouched, and usable in the old version of Logic.
Also, Selective Track Import lets you transfer your tracks (and ideas) between songs, and this is a quick way to try out new things on a new song.

Bounce In Place is, once again, one of those little big things that make your work much easier. Let’s say you have selected one or more regions (it can be audio or v.i., it doesn’t matter) and you want to render them into a new audio file. Well, a couple of clicks and it’s done. You get an additional menu asking what you’d like to do with the source (mute, delete, leave), if you’d like to get the effects “printed” onto the new file (or bypassed), if you want to keep the automation and if you want the file to be normalized. This can be also a powerful feature in cpu-heavy mixes, it seems to be faster and more comfortable than Freeze 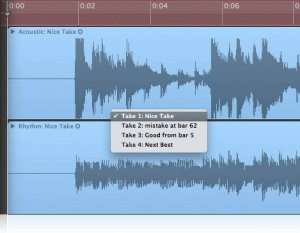 Multiple Takes‘ management was already improved in Logic 8, and here it’s been refined. It’s easier to manage folders and to move elements between the takes. I know it’s not new, but I love the easy comping process.
And if you need to write down something about the tracks you’re working on and you’ve run out of pencils in the studio, well, there’s a Notes window that lets you store your precious thoughts right in the song’s file (it works on a track-by-track basis). A little thing maybe, but quite useful! There was a free plug-in available doing something similar, but the fact this feature is now integrated in the interface is a great improvement.

Drum replacement is another of those things that in the past forced us to use third-parties solutions and it’s nice to see it now integrated in Logic’s menu. It works quite easily. If you have a kick drum you don’t like, or that you want to be doubled, just let Logic analyze it, and then the software creates a new Midi/EXS track with the resulting midi data. You see a list of suitable replacement presets (for kick, snare, tom mostly), just browse through them while in pre-listening mode until you’re satisfied. It’s possible to set a threshold, to improve the original transients’ recognition. Of course you can later use your own samples as replacement. Logic just shows the factory EXS ones, but you’re not limited to that, you could even use another virtual instrument. Especially if you need to replace hats and cymbals, Logic’s default choices are not so useful (it’s just kick, snare and tom), so in these cases another set of samples and/or a different v.i. is the way to go. Anyway, a cool and very easy to use (really, just a few clicks) feature, well done Apple.

There’s another feature which I’m sure could make many people happy, but I have to confess I still have a love/hate relationship with it. It’s called Varispeed, and it basically lets you slow down (or speed up) the whole song session (between 50 and 200% of the original tempo). The idea is taken by the technique used with tape machines in the past, and it can come in handy for practicing or experimenting. By the way, if you can’t see the Varispeed icon in your transport bar, just add it: Control-click the Transport bar, choose Customize Transport Bar from the shortcut menu, and select the Varispeed checkbox in the Display section.
That said, I’ve tried Varispeed on an electric bass track (reducing the song’s speed from 150 to 130) and while the process worked fine, the resulting audio quality of the bass track was quite low. I’ll try again with different sources and I’ll update the article with the results. Just don’t expect too much from Varispeed if you need the perfect sounding track for your new album and you are not so good with your instrument (like me as bass player!).

Talking about instruments and fx, I’m almost glad to say that there are not new instruments (frankly, the package was already full of good and very usable stuff, and it would be enough to create music for the rest of our lives).
I would have liked to see a new GUI for Ultrabeat and Sculpture, they both have a great potential, I love the sound but the interface has always put me down (and I have heard the same from a lot of people). 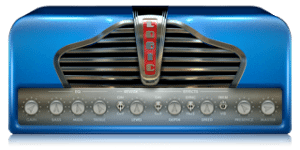 Anyway, there IS some new stuff in the guitar amp department. Amp Designer emulates the sound of over 20 famous guitar amplifiers and the speaker cabinets used with them, and it’s a big step forward from the Guitar Amp Pro introduced with Logic 7 (don’t worry, it’s still there if you have some old session to open). Better quality, and much better GUI and flexibility (like we’re used from dedicated plug-ins, like Amplitube, etc.). And it’s not only about the usual amps you see everywhere. There are also some boutique/rare to find units emulated. For the full description of amps and cabinets, Logic Studio Effects pdf is your best friend! There are also some nice tips about combining Amp Designer with some of the most unusual Space Designer’s patches, to create weird textures of sounds. 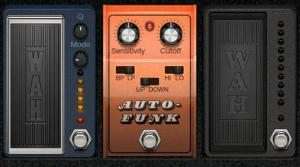 And yes, I forgot to mention it until now, but we got also Pedalboard, a wild bunch of emulated stompboxes (Distortion, Modulation, Delay, Filter, Dynamics, plus Mixer and Splitter), with a good routing (two discrete signal buses), all midi/macro controllable too.

Talking about documentation: while the big hardcopy manuals are a thing of the past (it helps saving some trees and keeping the price low) Logic Studio’s embedded help it’s quite slow and unfriendly (compared to the good old pdfs we were used to; luckily all the new manuals have been released as pdf after a few weeks), we have to say the Apple did a great job with its Logic Studio’s website pages. Lots of video/audio contents, and quite useful too. An excellent balance of information and marketing.

Overall impressions: in these two weeks Logic 9 has been a stable (only 1 crash, and probably due to my fault, doing too many things at the same time) workhorse. A few visualization bugs appeared here and there, but I’m sure the next 0.x updates should take care of these little quirks.
Having L9 and L7 on the same machine is doable, even if sometimes you could get some issues, with Logic’s internal plugs. Ultrabeat in L7 in one case was not able to find a kit anymore. Anyway importing the same track (with the Selective Track Import) in L9 fixed the issue.
As always, with complex softwares as this, there are many factors affecting performances and stability.
My advice in these cases is trying to keep your computer as clean as possible, lots of free space on the hd, a good amount of memory (4gb can be fine, unless you use several big sample libraries at the same time). I was on OS X 10.4.11, and did the upgrade to 10.5.8 just to use the new Logic 9. Everything went smooth. Scan your hd and repair permissions before/after doing these things. Last but not least, take your time, these things don’t need to be rushed.

Logic Studio, with its 499$ price, is definitely a killer package. I mean, if you’re seriously doing music and/or you have a little/medium/big studio there’s no reason not to have a copy of Logic. In my case, I love having and using both Logic and Live. They complement each other quite well, but Logic is my favorite choice when I need to work in a more traditional “studio way”. Yes, Logic can be a deep program if you’re new to it, but now it’s much more usable than the past. And you do not need to be an Environment guru to enjoy the power of Logic, well, I’ve never been and I’ve always been able to do what I needed to do anyway, without too many problems.

Even if you’re an old Logic user, still on v.7 or earlier, the features mentioned above (and the new streamlined interface introduced since v.8) are well worth the upgrade price (199$, or 299$ if you’re coming from Logic Express).
I was a Logic 7 user and while I was liking working with 7, I find myself using and liking Logic 9 more and more.

Also, I’d like to mention the fact that Logic is still (not surprisingly) the most optimized pro audio software on the Mac platform when it comes to cpu resources. Even using the newer audio editing features, I’ve been able to complete a quite complex project on a several years old machine. And this means value for money!

In a next article, I’ll explore Mainstage 2, which brings lots of improvements to its first version. Now gimme a break, I need to go out for a walk and breathe some fresh air, it helps making better music!