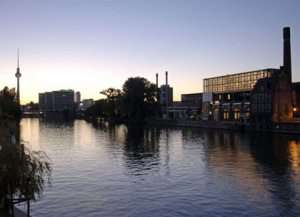 The 2nd edition of Music Hack Day, this time in Berlin, has just closed its doors. Today was demos and presentation day, and here it’s a short story of what we saw.
Well, first of all we’ve found a very relaxed atmosphere, it seems the music hackers enjoyed the place and the event. By the way, the location (RADIALSYSTEM V) was simply beautiful, and even better with the late-summer sun we’re enjoying in these days. 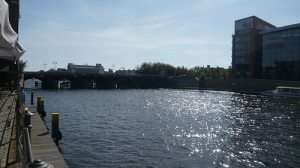 We’ll upload more videos and pics as soon as possible, feel free to send links and stuff if we’ve missed something.

We could probably divide the projects we’ve seen in two or three categories. The first one has to do with the API of companies involved in Music Hack Day (Soundcloud, RjDj, etc.): among them a couple of well-made uploader tools for Soundcloud (CloudPost, written for Mac OS, while the other one is an Adobe Air app, then multi-platform compatible), a WordPress plug-in for RjDj (a shortcode to use in blog posts for embedding information about an RjDj scene).
Other web related apps are GigLook, a music event calendar for the next 9 days that allows you to have a quick look over whats happening, getting events from last.fm, eviscape.com and pictures from musicpictures.com and last.fm.
In the same “data fetching & re-assembling” field we could put Last Echos In The Cloud, described as a mashup between Cloudspeakers, Echonest and LastFM. Basically you get music reviews and similar artists based on your LastFM profile fetching data from Cloudspeakers and Echonest. 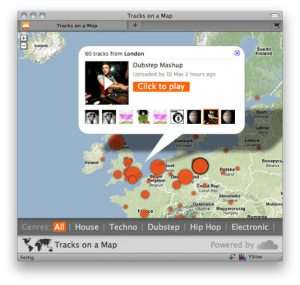 Tracks On A Map and CitySound.fm (iPhone app) are the “geographical” expression of this web-oriented development area. They’re both fetching data from Soundcloud and are a nice way to have a clearer picture of the sounds of the world. We like these kind of apps because they tell something more about the planet we live in, and it would be just great if they could fetch data from more sources.
Another mash-up: SoundEchoCloudNest, let you annotate your SoundCloud tracks with data from EchoNest analysis. No GUI for this yet, and we’re not quite sure we got how it really works, maybe the presentation needed a better focusing.

The second category could be called “music instruments hack” and has seen a couple of quite successful projects: one is Xylobot, an Arduino-controlled Xylophone, capable of handling Midi-input. 6 servo-motors connected to an Arduino running a custom firmware, a java application manages the handling of the incoming midi data and sends serial commands to the board. Among the controllers used to show the project, a monome running as step sequencer, an iPhone app with pads controlling the notes, and iLoveAcid, a nodes based sequencer (this seems to be an interesting trend, Nodal and Tiction’s followers have a new friend). We’ll follow what happens to Xylobot, also because the concept could be extended to other instruments. Yeah, we like robotic musical toys!

TouchTool is described as a multitouch music synthesizer and visualizer that looks like Twitter (well, a sort of relaxing animation inspired to it!). It’s a mix of Quartz composer, OSC and Chuck, with the help of Snow Leopard. Actually using the touchpad to play a synth it’s a weird experience at first, but we’ve appreciated the fact that there’s a lot going on under the hood (it can track up to 11 fingers, uhm, if your 10 are not enough you can always ask NI, they’ve just got a new finger available!). Well, the prototype’s sound was quite raw but it will be interesting to see how this project will go on.

For a couple of other presentations we’d like to find out something more, the voice of the author in one case was quite low at least from our position (we saw a Maschine used in combination with a Reaktor ensemble, playing up to 4 different files, using NI’s controller to tweak filters, loops’ timing/offset, etc.) while in another case the project seems to be quite complex (Virtual Audio Rendering Engine) and in need of a longer/better presentation.

Last but not least, an unfinished but potentially useful app: SoundCloudVst. Its main purpose is to manage to backup or share the files/tracks that are stored within DAW/host applications. Sounds a bit similar to what Ableton is doing with its upcoming Share feature, but this would not be exclusive to Live, so Logic and other DAWs users could be interested. 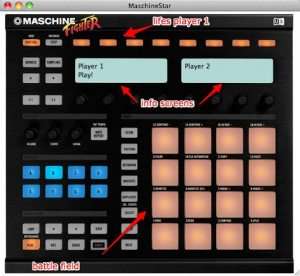 Among the “hard to label” stuff, a funny project: MaschineFighter, a two players game using NI’s controller (and its latest firmware). Player 1 plays a pattern and Player 2 tries to replay it as accurate as possible. If he fails, he looses one of his four lives.
The first player who looses all of his lives, well, you know the story…
The game works by running Maschine in Midi Mode (firmware 1.1+). MaschineFighter records the midi notes and compares the play of the two opponents.

More videos from the event can be seen on Qik, don’t expect hi-quality clips but they’re good enough to get an impression of what was going on today.

Detailed info on the authors of the apps can be found on Music Hack Day’s submissions page.

Just out also an interesting article from Soundcloud’s Dave Haynes on TechCrunch, some deep thoughts in there.