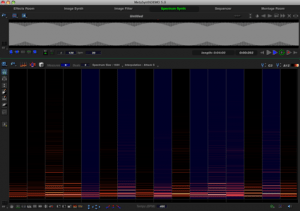 We’ll talk more about this later, but let me just say that I’m glad to see MetaSynth is back with a new version. I have some memories of it in the good old OS 9 days, but let’s face it, I was too young to really get what was going on.
MetaSynth (Mac OS OS X.4 or later, standalone software, not available on Windows, sorry) is a peculiar suite of sound manipulation applications, all living under the same roof. These applications are called rooms.
In MetaSynth’s environment sound and visuals are strongly connected to each other, you can literally shape your sounds. Not surprisingly, over the years MetaSynth has become one of the (more or less secret) favorite tools of some of the most talented artists and sound-designers around the world.

Usually at AudioNewsRoom we don’t like copying and pasting the official press release stuff, but since this is just a preview article and the product is quite unique, here it is what U&I team has to highlight about the new features:

* Native support of .wav, .caf, .aiff and SoundDesigner audio files at resolutions up to 32-bit floating point and 96 kHz.

*Instruments: MetaSynth’s instrument framework has been expanded and features 11 new synthesis modes including Phase Distortion and Pulse Width Modulation synthesis as well as a host of new capabilities that includes envelope-controlled parameters and velocity-mapping.

*Montage Room: Up to 24 stereo tracks can be mixed. The recording interface and performance have been significantly improved. Several new track effects have been added. Communication with the VTrack video montage editor has been added to allow edit-to-picture when running both applications simultaneously.

More on MetaSynth 5 soon. A demo version is available on the U&I website. I’ve played with it last week and be warned: just don’t make plans for the evening, MetaSynth can be quite addictive!

The price could be an issue for many, I know. It’s 599$. And yes, Logic and most other software you can have is cheaper than that. We’ll ask U&I about MetaSynth’s marketing too, but please do not consider it as the umpteenth host, softsynth or fx.
It’s an inspiring environment, a boutique one for sure, and it could open unexpected doors to users’ creativity.