I know it’s unusual, but in this case I’ll start from the conclusions: if you’re a keyboard player, and if you have some convincing Rhodes emulation (my favorite being the good old Scarbee sample library, but great results can be had from modeled products, like Applied Acoustic’s Lounge Lizard or Devine Machine’s OTR-88), you simply have to try IK Multimedia’s Amplitube Fender.
Yes, there are many virtual guitar amps around, and some of them are excellent (read what we wrote about Softube Vintage Amp Room). But keyboard players wanting to add some vintage grit to their sounds, often found them too gritty and saturated. That’s why I’ve always wished to have a virtual Fender Twin Reverb in my plug-in arsenal.
The Fender Twin Reverb was the amp used to test the pianos in Rhodes’ factory. And the sound most of us associate to Rhodes pianos is the sound coming from a virtual Fender Twin Reverb.
Well, if you can’t afford a Twin and/or you want to have a quick and easy to use software solution, you could be tempted to buy Amplitube Fender even just for the Twin emulation, it would worth it. I’ve used the real unit many times in the past, and I have to say that the clear, crisp and pleasing tones of the original Twin have been captured, the IK guys have done a great job on this, hats off.
But… the Twin is only one of the things you can find in this plug-in. 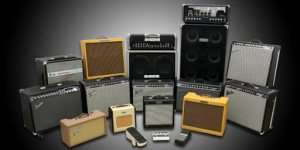 Actually there’s so much stuff that’s almost embarrassing: 12 amps, 12 cabinets, nine microphones, six pedals and six rack effects. It’s a sort of “best of Fender gear” (officially approved by Fender, and once in a while it’s not just a marketing yadda yadda), going from vintage devices to more modern ones (like the rack effects, taken from the Cyber-Twin amp). And it’s not only for guitar (and keyboard) players. Bass players are covered as well, with the Bassman 300 Pro and the TBP-1 Bass Preamp (we could add the ’59 Bassman).
The features list is too long to be posted here, but you can find all the details on the product’s website. By the way, if you’re the owner of a Fender guitar or bass, IK swears that the plug-in tones are tailored to Fender instruments, so you won’t need any particular tweak or adjustment, just plug your Precision or Strato and have fun!

As you would expect, the plug-in is also quite flexible: users can mix and match amps, cabinets, etc. Like in other Amplitube based products, there’s a two-rig setup with eight possible routing configurations. And you can do even more with the free add-on X-GEAR (eXpandable Guitar Effects and Amps Rig), a sort of dedicated host which works with all IK amp simulation products. That said, we’re glad that IK did not try to make this thing overcomplicated: while customizing things is often a good thing, in amp sims sometimes you really get lost with all the options. I’m more on old school guy about this: gimme a few good sounding options, and let the creativity flow. On our DAWs we have already too much stuff that probably we’ll never use…

Amplitube Fender works as stand-alone application and plug-in versions, on Mac (AU, VST, RTAS) and Windows (VST, RTAS) platforms.
It does not require any dongle (and that’s a good thing), but its challenge/response process could be a bit easier and more streamlined.
Some users on OS X 10.5.7 had an issue related to forgotten authorizations, but it should have been fixed with the latest update (maybe I was lucky but I had no such problems on my Mac).
As seen with other modeled products lately, this plug-in can be CPU intensive, especially if used with its highest quality settings.
My advice is to use the lowest quality settings when you’re in “composing mode” (they sound great anyway!), and switch to the higher quality ones when you’re ready to mix.
As always, check the system requirements before buying, or better, download the demo and try it on your set-up.

Amplitube Fender is fairly priced (some could say it’s a bargain): for $229.99/€169.99 you get a really powerful suite of gear, but wait, if you don’t need the full Amplitube Fender version, and you’re fine with a few of its amps/cabinets/effects/mics (the Fender Twin is included, keyboard players take note, hint hint…), you could get the AmpliTube Fender Studio (featuring Amplitube Fender SE) for a mere $139.99/€109.99!
Compare the specs of both products and see what’s best for you.