Ableton: Best of Show
Let’s simply put it like this: Ableton is the King (or Queen?) of Namm this year, at least in the software + controllers departments.
In a few hours they introduced (and co-introduced) many new juicy things.

Chapter one: Live 8 (available in Q2 2009) adds some cool features to an already great package: groove engine templates, new audio warping features, a looper, new plug-ins, including a multi-band compressor and a vocoder (which also help competing with the all-in-one Logic’s approach), new sound library (mallets and acoustic percussions, available individually or as part of the Suite version ), and a revamped Operator.
We’re also glad to see a new tool, called Share: years after the first internet-based pioneer steps (Logic Rocket, anyone?), Ableton feels times (and bandwidth) are mature to let users collaborate online.
Share in their words is “a simple system of setting access permission, speedy transfers and no issues with external plug-ins and instruments”. What if your friend across the ocean is not a Live user? When you send him your shared project, he gets also a temporary free License so that he can add his magic touch on your tracks and send them back! How cool is that?

Chapter two: things get serious for tweakers and music nerds: the collaboration between Ableton and Cycling ’74 has given its first result: it’s called Max for Live, and it’s an (optional) extension for Live 8. Basically it lets you add Max do-everything-you-like-to-do features inside Live.
It will be possibile to create new instruments, effects, composition tools, and everything can be done in real time, without stopping your music workflow. Oh, I see, you do not feel to be a music nerd? Don’t worry. As for the Reaktor users community, “Max for Live owners also get access to any number of additional instruments, effects and extensions created by the Max for Live community”.
Suggested additional read: David Zicarelli’s Perspective on Integrating Max and Live
That said, I guess lots of girlfriend and wives will spend more time on their own during 2009… 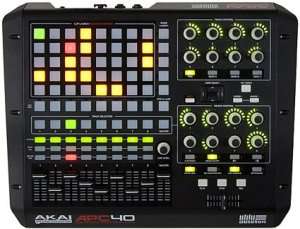 Chapter three: somehow tied to the Max for Live thing, there’s a third announcement made by Ableton, this time in collaboration with Akai. It’s about the APC40, a new hardware controller specially designed for Ableton Live.
From the press release: “The APC40 features high quality controls for real-time mixing, remixing and production. 109 buttons, 16 endless encoders with LED rings, nine 45mm faders and a replaceable crossfader give musicians and producers complete control of Live’s Session View, effect devices and virtual instruments”.
Furthermore, Max for Live owners will be able to completely customize the integration between Live and this controller. Power to the people!

For prices, upgrades and availability, it’s better to keep an eye on Ableton’s site. 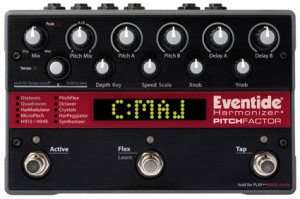 They had to to do, it sooner or later: Eventide is going to add a new product to their stompboxes line. The Pitchfactor is the heir of Eventide’s harmonization magic, and it’s a great introduction to their outboard racks, for those who can’t afford them. Price: $599 (Eventide’s margins on these products have to be like Apple’s ones on iPods, me thinks…). 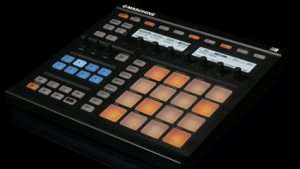 Let’s start from what it’s not: it’s not a standalone hardware drum-machine (unfortunately), it hasn’t any onboard sound nor audio converters. And if you think about it, it’s not that surprising. NI is essentially a software company, who’s doing also some hybrid software-hardware products (read Kore). NI is not Elektron (yet?).
So here you get a software sequencer (available as plug-in and standalone) with over 5 GB of samples sampling/re-sampling/slicing and internal fx, and a hardware controller (yes, that sort of MPC meets Monome meets PadKontrol style) with MIDI and OUT ports (it means you can use it to drive other devices, well done NI!), and a couple of nice displays.
The displays are really well conceived, since they let you do most of the things you need to do with Maschine without having to look at your computer’s screen.
The case seems to be well built, the plastic knobs seem a bit cheap but we need to put our hands on a real unit to say more on the build quality.
The videos published on NI’s site are a good introduction to the product’s features, have a look if you didn’t watched them yet.
Bad news for PPC Mac users: an Intel machine is required.
Other specs:
* 2 displays with 64×256 pixels
* 16 high-quality, illuminated pads with velocity and aftertouch
* 11 endless rotary encoders
* 41 backlit buttons

As usual in these cases, hybrid devices like Maschine bring some questions to the table (besides the obvious hardware’s build quality and software’s stability, which are hopefully going to be tested soon): do we really need a piece of software that seemingly does things that our daw and previous NI software already do? And what about the hardware’s obsolescence in a crazy fast computers’ market, where everything (O.S., plug-in standards, hosts version, software houses’ commercial strategies, etc.) seems to change faster than the speed of light? Ok, we’re talking too much here, let us just try this beautiful new toy and let’s see how it performs! 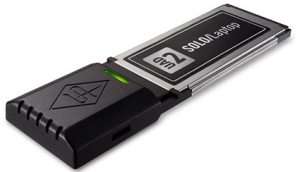 Laptop users rejoyce! Unless you have an audio card which already takes up your express card slot, this one’s for you. We don’t need you how good UAD plugs are, isn’t it? By the way, the 2009 should bring new names to the UAD’s ever growing list of beauties: Manley (yes, that Manley!) and Antares have just signed an agreement with Universal Audio. The Uad-2 Solo is not available yet (early Q2), and it will come at a price of $499.

The italian software house, already a big name for Logic users due to their previous products, has previewed a new set of applications, including Keymap Pro 2, AutoSampler 2 and ProManager 3 (ProManager is the new ExsManager).
The biggest news is these apps will extend their support to all the major instrument formats on the market, including Apple EXS24, Native Instrument Kontakt, Digidesign Structure and Propellerheads Reason 4 NNXT. The list of new features is really long and worth reading, check out Redmatica website.
What we can say is that these guys are raising the bar for sampling management again!
The Compendium Pro Bundle 2 is set to be released in Spring 2009. Price: TBA 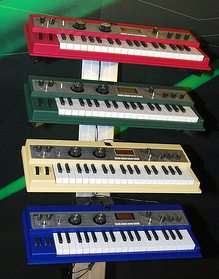 Yes, it’s been announced way before NAMM, we know it’s basically the Korg R3 wit a new dress (and size) but the colored versions are the icing on the cake!

It was Musikmesse 2008 biggest hit, its release has been delayed, and even if it’s not ready yet (it should ship at the end of Q1 2009) Melodyne Direct Note Access technology is so revolutionary that we had to mention it in our NAMM’s picks. The first Melodyne product with Direct Note Access will be Melodyne editor (formerly called Melodyne plugin 2). On Celemony’s site there’s plenty of details about price, upgrades, etc.