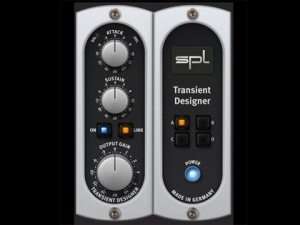 A couple of months ago, SPL, the well-known German manufacturer of analog hardware processors, has introduced their first software plug-ins: the Transient Designer and a set of three EQs (Vox Ranger, Bass Ranger and Full Ranger, based on the passive graphic equalizers of the SPL RackPack). They are available as RTAS, VST, AU and TDM versions. Please note: the TDM version of the Transient Designer will follow soon.
You can try the demo, going on their software download page.
The Transient Designer is one of those magic devices, simple and very effective at the same time. You don’t need to be a rocket scientist to use it, and it’s definitely one of those designs which “cannot sound bad”. In a way (I know it’s apples and oranges but…) it makes me think of other less-is-more classic designs like the 1073, LA-2A, etc.
Talking about the plug-in, you’ve probably seen and/or used SPL inspired Transient Designer plug-ins in the past. Well, forget them. The SPL Transient Designer plug-in is as close as possible to the real thing. Once in a while the marketing claims seem to have a real reason to be in this case. And it’s not that suprising, since the coders have worked in close relationship with the original hardware’s engineers.
The responsible for SPL software is Dirk Ulrich, already known for his work with Brainworx.

And… yes, he’s the one in this picture you can see on the Brainworx site in these days (by the way, if you’re interested in their plugs, it’s a good moment to check them out and buy something…).
After seeing that picture you know we really HAD to ask him some questions, isn’t it?…

Hi Dirk, could you tell us, in short, something about your background in
music/development?
Hey, well, I started playing guitars in bands when I was 17, then started recording demos and working in a pro music store in Germany at 19. I started my first real studio with 24, together with a music school and a small label. Also, I studied law for 2 years, but the music in me “won”… 🙂
I started Brainworx 10 years ago as a recording company, had the idea for my own M/S EQ 4 years ago, and this led to developing the bx1 analog EQ with a friend of mine. I designed the first bx_digital with Robin, my partner in BX, 3 years ago, and this was the start for a (so far) promising plugin company… to be continued…

How’s been the collaboration with SPL’s hw engineers? And how much difficult has been to get their final “yes” on the Transient Designer plug-in?
Well, we didn´t just get an OK for one plugin, we are the official SPL software department now, which is pretty cool! I have used SPL for years, so I know what we´re dealing with. In terms of coding the Transient Designer: it was not easy, this unit is a beast. Knowing the inside of this box now I can understand why there are many copies out there – and why they all fail in detail…
The collaboration with SPL´s engineers was great, they know thir gear very well and have pointed us to many details that we might have easily overseen else… so the combination of some solid analog background knowledge and some talented programmers (who are ANALOG freaks as well…) seems to be a great mix.
Let me add that I am not an analog engineer and I am not a programmer… I am an audio engineer and producer originally, so my job is “listening carefully” and running the BX show on a daily basis…

In the latest Transient Designer update (version 1.0.2), reading the release notes, I’ve read something about improvements in the algorithm. Could you be more specific?
Well, we released 1.0.1 because we felt we did all we could, but a few weeks later, and many hours with the software in the studio later we found out that there were still some small things to improve in the Sustain process, so we tried harder and we liked the result better, as did SPL´s guys. It´s even closer to the hardware now than before, so we went for it…

I’ve read you’re developing other products for SPL, could you tell us something more?
Like I mentioned before we run the SPL software department, and we have plans of doing ALL the processors that would make sense in a digital domain, and we might even come up with SPL software that has NOT been released in hardware…
The next plugins will be TDM versions of the 2 existing plugins, then we´re working on the VITALIZER MK2t and the TWIN TUBE, the phase cancelling DE-ESSER will be a project, etc…

Now, more than ever, you have a strong background in both hw and sw products. What do you think of the “classic” fight: outboard vs. plug-in emulations, now in 2008, and what we should expect for the next  years?
I LOVE analog gear, like we all do. But in many studios there is no more time or room for outboard equiment, everything must be automatable, recallable, and last not least budgets get tighter in most studios… so I see a great future for software plugins – provided they sound right and offer tools (not toys). We have a lot of grammy-winning clients with BRAINWORX, and these guys are telling me that they are using our bx_digital on ALL of their no.1 mixes makes me proud – and it says something about software vs. hardware: if software is done right, it can replace hi-end gear in 2008.
Turning knobs is still fun though, and many pro studios will go on using hi end analog gear. And they SHOULD…
Everybody else: good software rocks! 🙂

I see you run a recording and mastering studio (Brainrox), and that you like LOUD music! I guess playing and recording some music helps not to become crazy after a day of coding 1 and 0s. But… how do you find the time to do all these things?
I am not coding at all… I write the bills… 🙂
And I do a lot of testing for ALL of the BX and SPL plugins, so there is a need for a studio anyway.
We are not recording too many bands in that studio anymore, but I would say 5 album productions and a LOT of hi end mastering jobs go through Brainrox every year… we are doing a lot of online mastering as well for clients in Russia, Sweden, USA, etc.
I LOVE music, and if it´s LOUD – fine! I have produced a lot of punk and metal and rock, like the TSR Project ft James LaBrie of Dream Theater on vovals, check it out!

Thanks Dirk, and a merry Christmas from all of us at AudioNewsRoom!
Merry X-Mas everybody, and thank you for your time!