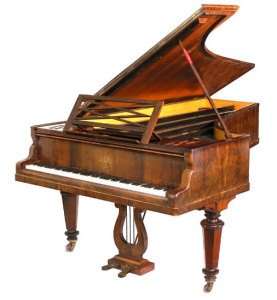 Some years ago I was in a musical instruments museum, and while it was good to see all those old, rare and incredibly beautiful harpsichord and pianos, I admit it was a painful experience. You know, I wanted to “jump” on them and start playing!
Well, of course things are not going to change in this kind of museums, but technology sometimes may help: the german sample libraries brand, realsamples, has released an interesting collection, The Beurmann Edition. 8 libraries for 8 different instruments, which can be bought separately or bundled together (saving some money!).
For historic instruments lovers the Beurmann Edition is a godsend. The quality of the instruments (3 harpsichords, 1 spinet, 1 celesta-dulcitone, 3 pianoforte) and the way they’ve been carefully recorded really make these libraries stand out in the crowded samples market.
We have had the chance to try three of these libraries: the English Spinet, the Grand Piano (Erard Pianoforte) and the Dulcitone Celesta.
Since the realsamples website has a lot of info on each instrument, I won’t repeat the same things here; I’ll just say that quality and out-of-time emotions are the keywords here. Unless you’re a lucky owner of some historical instrument these are some of the finest results you can get from today’s sampling technology.
It may be obvious, but don’t expect an “hyped” or “ultra-perfect” (for today’s standards) sound from the Beurmann Edition; these instruments come from another time, and their unique tone and dynamics need some time to be fully appreciated.

The libraries are available on DVD (sometimes on multiple DVDs) in EXS24, Halion, Giga and Kontakt 2 formats (16 and 24 bit, 44.1 and 48 khz).
A little note for Logic users (at least for those using the 7.x.x version): since the samples’ files are named in a similar way across the several libraries, the EXS could have some problems associating the instrument to the samples. If it happens, my advice is to use Logic’s Project Manager (the Logic 8’s Browser Window should be able to perform similar tasks). The developer is aware of this little issue and told AudioNewsRoom he’ll take care of this on the next revision.
Prices go from $ 139.95 to $ 159.95 (VAT and shipping excluded) for one library ($ 999.95 for the bundle).
The only thing that’s missing (and it’s not realsamples’ fault) is, ermmm, the physical experience. Playing these samples on your MIDI keyboard it’s definitely not the same thing, but add a touch of (a good) reverb, close your eyes and start playing…

As you can see, there were enough reasons for us to try to know more about the Beurmann Edition, so we asked some questions to Nicolay Ketterer, the brain behind realsamples. From his long and detailed answers you’ll probably understand why these libraries are a real labour of love. 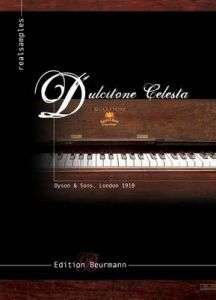 How the Beurmann Edition idea came out? And what about the choice of the instruments?

Professor Beurmann has a huge collection of old instruments and most part of it can be seen in the Museum für Kunst und Gewerbe in Hamburg. But the visitors can’t play them – it would be too hard to keep them in tune and some are very fragile and they could break.
But what musical value do antique historical instruments have if they remain silent? So the idea came up to make them playable in a software sampler. It’s great to hear those special sounds come alive again and being used in current productions.
We should keep in mind that those instruments are cutting edge – very much in the sense how Stradivari violins are highly sought-after and unparalleled, it’s the same with Ruckers harpsichords or Hitchcock spinets. What a shame if we would not use these sounds today! The instruments build today sound different.
Part of it is the aging process, of course: Wood sounds different when it’s old. Just like an old Fender guitar sounds different than a new one. Not necessarily better in all cases, but different. You can almost hear and feel the history of the instrument when you play it.
The same goes for the old pianos of the collection. They don’t have that modern sound that we’re used to from a Steinway, but a very different, classy sound going on. The pianofortes by Johann Andreas Stein were Mozart’s favourites, for example: They have a baroque attitude that also goes very well with many different styles today. The Erard pianoforte melts with Chopin’s works and is great for any music with character.
For these libraries, we chose instruments that are very distinctive in their own right and that had a historical impact. 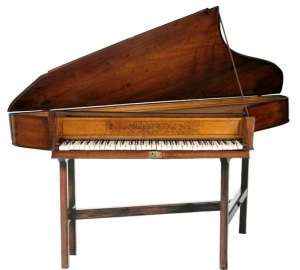 In your website we can read about the gear you used to record the samples. Have you tried other gear before choosing this set-up? And could you share with our readers some details about the recording? Mic techniques, etc.

If I’d record a rock/pop band, I’d shoot for the kind of colour that fits the music, e.g. for guitars I’d try a Royer R121 with a Chandler Germanium, for example.
But with the old instruments which are masterpieces that sound very even and balanced, you don’t need that kind of colour: On the other hand, I didn’t want to record with a rather “boring” sounding signal chain.
You always have to keep in mind that sampling is a totally different animal than simply recording a performance: Instaead of playing an instrument, you play a whole mix – every single key in a sampler acts like one track in a multi-track environment. You layer the single samples to a whole performance. If you use equipment that sounds too coloured, the colour will add up and things might become muddy. Also if you use equipment with a bad noise floor, the noise will add up and may become audible, especially with quiet instruments such as harpsichords, spinets, or the lower range of a piano.

My main goal was to find a recording chain that has a certain fidelity and musical soul, a natural warmth, while retaining a classy and pure sound.
Before I start recording, I listen to the instrument very closely and try to find out what the soul of the instrument is; The special thing that sets it apart from other instruments. Then I try to build a recording setup that really focuses that element.
For the mics, we made two choices: The rather neutral yet big and present sound of old Neumann TLM 170’s. For some of the instruments, I preferred a pair of Royer R122V ribbon mics. They have a tube gain stage and more output than traditional ribbon mics. They brought some polish and grace to the table that fit some of the harpsichords and the Traugott Berndt pianoforte very well, lending a nice, expensive shimmer to their treble range. In contrast to normal ribbons like an R84 or the R121 which can sound rather dark with very balanced or mellow instruments, the R122V’s have an extended high end. I also like what they did to the mids, and the way they record the transients.

Regarding the preamp, I didn’t want to use a preamp that has a sonic signature that’s all over the recordings like a thick cloth, adding up with the number of samples played. Along with our choices of mics, we ended up using the Crane Song Flamingo preamps which offer a great noise floor and a neutral yet anything but sterile sound. The transformer simulation and the “warmth” feature gave us great versatility when needed, so we did not use different preamps for the whole recording session.
One thing that is often underrated for a digital recording is the converter. When I first heard the difference from some studio standard RME converters to dedicated audiophile units, it seemed stunning and worthwhile. A sampler is a digital tool and it will reproduce an instrument in a digital way, so in order to capture the instruments in an organic way, I decided to go with Universal Audio 2192 converters. They don’t sound harsh in the sense of some converters without altering the sound in the way a preamp would.
I really like to share the information on the recording setup, because it reveals a certain concept behind the whole thing and also indicates a certain level of care that went into these recordings. It would be rather meaningless to simply state “high quality recording equipment”.

Your products are compatible with most of the samplers; do you achieve this using a conversion software or it’s a one-by-one tweaking process?

Most formats are tweaked one-by-one. Some formats don’t work well with conversion software – the GigaStudio format, for example, which is really a special deal, so I create that originally. Others, like Halion, can be converted easily.

At AudioNewsRoom we love the sound of unusual instruments, like the Dulcitone. Do you think we can expect more of this “off the beaten path” releases in the near future?

Oh, I love the Dulcitone, too. It’s one of my favourites! That crooky yet innocent sound full of patina and character shows what sampling can achieve: If you play the samples, you would be hard pressed to guess that this is a sampled sound, not a real instrument. There will be some more unusual instruments in the near future as well, but I can’t tell you anymore than that at the moment, eh eh!