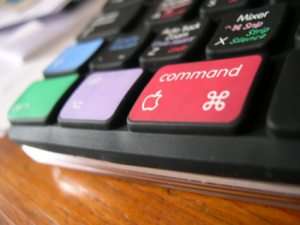 Let’s say you’ve just bought Logic 8 (Pro or Express). Like with other complex applications, learning at least the most important keyboard shortcuts is one the best thing to do. It speeds up your workflow, and makes the whole music-recording process easier.
You can start learning the shortcuts exploring Logic’s menus, or having a look at the preferences. But it takes time, and it’s not that fun (especially if you’re not so good at memorizing this kind of things, like me!).
Some time ago, while browsing the web, I found this company called KB Covers. At the time they were selling keyboard covers (made of “durable, ultra-thin silicone and perfectly molded to fit the original Apple Keyboards”) for Photoshop, Pro Tools, Sibelius, some games, etc. I thought, hey, it would be cool to have a Logic keyboard cover too.
I’ve put myself in “spiritual communication mode”, and they listened to my telepathic request.
A couple of months ago they added the Logic Pro/Express cover to their catalogue! 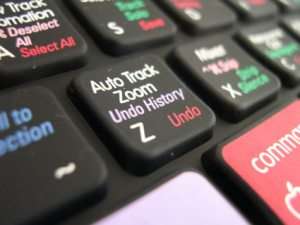 I just got one (had to wait a bit, ’cause the european ISO version was not available yet), and I have to say it’s exactly what I expected it to be, and probably more.
It takes a few seconds to put it on the Apple keyboard (they have two versions, one for the Apple Keyboard and one for the Apple Ultra-Thin Keyboard, both US and European ISO layouts are available), and the first thing you notice is the high quality of the printing process. Texts and colours are perfect, everything is easily readable.
I was a bit skeptical about the tactile feedback of the keyboard. I thought, uhmmm… it’s silicone…
Well, I admit I’m pleasantly surprised: it’s soft and comfortable as advertised, and I like it, I really like it, to the point that sometimes I keep the Logic cover on the keyboard, even when I’ve finished my work with Logic and I’m just browsing the web or using the computer for other tasks.
The Logic Keyboard Cover (designed with the help of Orren Merton, author of several books about Logic), as said, does what it’s supposed to do. So, if you don’t need to customize Logic’s shortcuts and just want to stay with the default settings, it’s definitely something to add to your shopping list. At that price, $39.95, I wouldn’t think too much about this keyboard cover. Well, it’s not cheap, but it’s way cheaper than getting a dedicated new keyboard, and you can use as many covers as you need (if, for example, you are a Photoshop or a Final Cut user too). Oh, it’s washable, which is a plus!
Of course if you’re an advanced user and you’ve spent a lot of time customizing your shortcuts, this product is not for you.
Last thing: this cover, as said, is for Logic 8 users. Since I have also a mac running a copy of Logic 7 I tried to spend some time to see if the cover was usable on that version as well. After a couple of hours and keeping some useful pdfs as reference (you can find them on Edgar Rothermich’s site and in a LogicProHelp’s thread), I can say that, yes, the Logic Keyboard Cover can be used by Logic 7 users too.
You just “lose” two/three keys, not more than that. Actually, Logic 8’s default shortcuts are not so different from previous version: some of them are just renamed, some others are assigned to different keys. So the trick in this case is to customize your Logic 7’s settings to match the most recent ones. That’s where the pdfs come in handy.
As said, some commands in Logic 8 are totally new, and that’s where you “lose” some keys, but I think you can live with that!

A final note to KB Covers guys: I love your cover, but please… make your blisters easier to open!