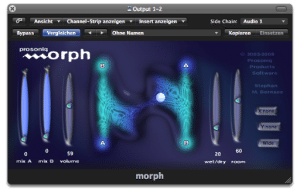 Plug-in nostalgia? There can be such a thing? Well, yes, after all…
Some time has passed since we’ve started experimenting with software fx and instruments. And probably, if we think back to the early days of plug-ins, the name Prosoniq comes to our mind bringing back some nice memories. SonicWORX (which was the first Mac software with a plug in architecture in the 1990s), PiWarp, Orange Vocoder, Morph, but also the TimeFactory standalone app (I remember the first time I tried it at a friend’s studio, it was one of those “wow” moments!)…
Well, to make a long story short, we were glad to read some months ago that the german software house was going to update its product line making it (at last) compatible with the newer OS X operating systems and plug-in format.
Morph has been the first of the series (now they’re going to release the Orange Vocoder in the next days) to receive the “AU make-up”.
For those who do not know it yet, the plug-in offers a unique way of morphing two audio signals in real time. How does it work? Well, this is how Morph’s creator, Stephan Bernsee, explained the concept behind the plug-in in an old interview: “My definition of morphing comes from the video world, where morphing was first invented and employed by ILM (Industrial Light and Magic) in ‘Terminator’, if I’m not mistaken. Morphing, in that context means that an object in a scene slowly changes its shape to become another object. The analogous process in the audio world would therefore be an instrument that slowly changes its shape to become another instrument. All morphing processes I’ve seen – except ours – do some kind of spectral manipulation that has nothing to do with the shape of the original instrument. The concept of ‘shape’ requires understanding the nature of the sound that is being processed – I therefore tend to think of them as some elaborate mathematical tools with musical effects, but not really ‘musical’ tools. The problem with these tools is that they inevitably require the whole sound to be analyzed prior to manipulation, and that they tend to produce non-musical results in the intermediate stages of the morphing. Our morphing process is based on an inherently ‘musical’ approach and does therefore not have these restrictions.”
It’s interesting that Stephan began developing Morph on his Atari ST in the late eighties (of course it was not a real time software at the time). Well, you know, when ideas are good, they’re able to stand the test of time!
So you may ask, it can really be useful for today’s productions? We think Morph is still the lovely and inspirational piece of software that it was years ago (and that made it a favourite of artists like the ubiquitous BT and of big studios like the BBC ones). At AudioNewsRoom we really like software like this, that try to spice up the creative process without being too complicated or overloaded with options most users will never use. If you are a “vintage” plug-in aficionado or at your first experience with a DAW, our advice is: download Morph’s demo and have fun! 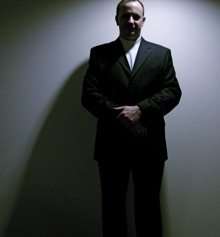 Talking with Stephan, we also tried to understand which were the reasons for Prosoniq’s ‘standby period’ and which are his plans for 2008: “I really don’t want to go into too much detail but I can tell you that Prosoniq has lost a lot of money when Hartmann Music (the makers of the Neuron synthesizer) filed for insolvency over a quarrel with their former distributor. This has been a major setback which came as a real shock to Prosoniq and has subsequently caused a lot of products to remain stuck in the release pipeline for quite a while. In particular, Prosoniq has been unable to respond to the requests of the AudioUnit community even though the AudioUnit version of their products was well underway at that time. We sincerely hope to make it up to them by now releasing our AudioUnit products first. We really have great customers, they are just amazing and so unbelievably creative and we truly love them and we really care for their requests and listen to what they have to say. We’re sorry it took us so long to get there, but all that is now going to change in 2008. As a side effect of all this there had been some dramatic changes in the Prosoniq management, organization and cost structure, and looking at the rapidly increasing Prosoniq sales I’d like to think that they were justified, necessary and beneficial for the company and enabled us to live through this difficult era and come out almost unscathed. In particular, the way things are organized now Prosoniq is able to come out with more and better products faster than ever before, keep track of bugs and other issues in a very transparent way and provide excellent tech support even on the weekend (which is when most people are making music).
In addition, some exclusive licensing contracts as well as some requests by the music industry that we have been honouring in the past are no longer in effect in 2008, which enables us to come out with some pretty amazing products later this year. I can’t talk about them before they are officially announced but if you visit the Prosoniq web site every now and then you will notice that the Prosoniq product portfolio will change quite a bit in 2008.”