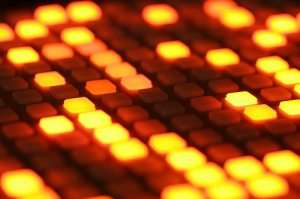 Matthew G Davidson, a.k.a Stretta, is a musician and designer, well known in the monome community for being one of the most active developers of Max/Msp patches for the controller. Well, I don’t think I’m far from the truth saying that some of you have bought a monome just to play with Stretta’s patches!
Anyway, Matthew has just released an “all monome album“, created during the Thanksgiving weekend!. Well, this definition is more a sort of coup de théâtre and a provocative statement (related to the recent first all TENORI-ON album), since the monome is a controller and not a musical instrument. But, as he says: “while this fact dilutes the idea of an all monome album, people interested in finding their own voice with an instrument consisting of a grid of buttons should note the lack of predetermined software and sounds is the true strength of the monome.”
As sound generators, he used a Doepfer modular, a Prophet 5 and MachFive 2. The most interesting thing is that he used only his own Max/Msp patches (freely downloadable too), so it’s really a craftsman’s thing and I have a great respect for people like him!
The album is called “Grids” and his downloadable from Stretta’s site. Donations are welcome.

A monome-like sequencer for the iPod Touch