This time our special guest is Magnus Lidström, the mind behind Propellerhead Reason 2’s Malström synth and our beloved µTonic (or MicroTonic), released under its own Sonic Charge brand. Magnus is taking a little vacation in the deep forests of Småland (Sweden, of course!), where he’s meditating on his next software…

Do you feel more proud or more annoyed when the first thing that keeps being said about you is something like: “…oh, yes, he’s the guy who worked on that Reason 2’s synth…” ?

If there are things being kept said about me at all I am naturally proud. (At least if the things being said are positive.) Naturally you always want to top your previous achievements, so in honesty, I am always nervous about my new releases. I rather butcher products that I do not feel 100% confident about as opposed to releasing them just to cash in on my reputation. So the answer is a bit of both. I would perhaps be annoyed if Malström turned out the only thing that people would remember me by, but at the same time being remembered at all is really sufficient.

Why did you decide to create your own brand, SonicCharge, to release Microtonic? No one else was interested in releasing it at the time?

No, that was not it. The whole point of creating Sonic Charge was to see if it was possible to create and sell software entirely on my own, using only internet distribution. My original intention was to release a lot of very small plug-ins only and decided that a synthetic drum-machine would be an excellent free teaser to bring attention to my site. Several months into the development on MicroTonic, I did a 360 and decided to focus on making a single very strong product instead.

We’ve reviewed Microtonic here, and as many we think it’s a little jewel. What’s your opinion on it, after some years, and what about its future?

I am honestly surprised how well it has stood the test of time. When I released it back in 2003 I thought that the life-time of a plug-in couldn’t be much more than two years perhaps. MicroTonic is on its fourth year now and it is selling better than ever. (But of course, I have also released a few updates.) I still use MicroTonic a lot personally and for some reason I haven’t grown tired of it yet, so I expect to continue working on it for long.

How did the TinTonic idea come out? It’so brilliantly, well… “nordic design”! … Maybe you could also try to sell it worldwide through Ikea, eh eh!

Hehe. I give the entire credit of the idea to Wolfgang Merkle of Bitplant. I guess it takes a German to design something so characteristically Swedish, eh eh! In particular, I would never have thought of the idea of delivering the USB-memory inside a metal can. That’s a stroke of genius.

Talking pattern based drum-machines in general, I’m quite surprised that the basic concepts behind them have not changed much through the years; for example I’d like them to be more “flexible” and suitable to less rigid, linear kinds of music (also dealing easily with non 4/4 time signatures, etc.). Am I asking too much?

Not too much no, but perhaps more than people would expect. When I designed MicroTonic in particular I wanted to stay true to the original concepts of pattern based drum-machines of the late 70’s and early 80’s. The lack of flexibility and the stiffness of these old machines were due to technical limitations, but turned out to change the way that music sounds (especially if you look at European dance music). The only innovation I allowed myself to add to the pattern programming was the fill buttons.

Which is the most difficult challenge in your job? Coming out with new ideas, hackers, bugs, or what?

Ideas grow on trees; it is the visions and the craftsmanship that matters. There is the phrase “it is not what you do, it is the way you do it”, and I couldn’t agree more. Sometimes though, my own perfectionism becomes my greatest enemy. Knowing when to give up and saying “it will pass” is especially difficult when you work alone. One of the major headaches is maintaining 100% compatibility with all the various operating system versions and host applications. I spend at least half the development time just testing what I code. The upside to this frantic testing is that I get rid of most bugs early in the development process, leaving very few for the beta stages, and (so far) virtually none in the released software.

When you make music, which are the instruments and fx (hardware or software) you really can’t live without, besides your own?

I’ve always been a minimalist when it comes to the amount of artillery I utilize for my own musical mayhem. I enjoy deeply exploring the possibilities of a limited set of tools, rather than just scratching the surface of everything out there. When it comes to synthesizers I’ve enjoyed using z3ta from rgc:audio, AudioRealism’s ABL and the Korg Legacy synths. Favorite effects include the CamelAudio effects and dblue Glitch.

Which are the artists (just a few names) and musical genres you’re into? 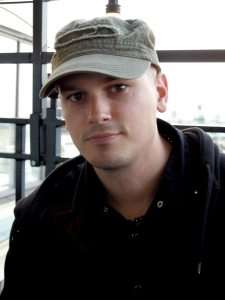 I am afraid I am pretty predictable when it comes to music. I like music that pushes genre boundaries a bit, without stretching it unnecessarily far. Good music is a bit like good software, there have to be recognizable parts, like for example scrollbars and menus, and in music you have your familiar 4/4 rhythms and chord progressions etc. But there must also be a bit of innovation, otherwise it isn’t unique. If it isn’t unique, it isn’t art, and when it is not art, it is mainstream, and I don’t like mainstream. But I haven’t answered your question. It is tough to select just a few artists, so I am going to simply put iTunes to shuffle and write down the next ten random artists. Here goes: Legendary Pink Dots, Chicks On Speed, Aphex Twin, Morcheeba, Vangelis, Front 242, Sophie Rimheden, Boards of Canada, Peter Gabriel, Groove Armada. Pretty predictable right? 🙂

Your most recent work I’m aware of, is the collaboration on Addictive Drums, by XLN Audio. Which is AD’s strongest point, in your opinion, compared to its more famous competitors?

Addictive Drums manages to pack a lot of muscle into a pretty slim outfit. With the built-in mixing environment and quick loading times you can easily check out 20 different drum production styles in just as many seconds. Lars and Niklas (who came up with the product idea four or five years ago) are professional musicians and sound engineers, and I think that shows in the end product. It sounds good, responds fast and looks pretty too.

Have you ever thought to implement your software products into an hardware device? And what do you think of new interfaces/technologies like multi-touch screen, etc.?

I’d love to go hardware some day. There is just something magic about turning a real knob as opposed to using a mouse. One thing that bothers me about software is the way it quickly decomposes if it isn’t kept up-to-date by the manufacturer. Give it a few years without updates and you risk not being able to load it up anymore on your latest computer with the latest OS. Software loses value quickly this way, as opposed to hardware, which if kept in good condition can hold for decades, and actually increase in value. About future interface technologies I am really intrigued by the multi-touch interfaces you mention. The physical qwerty keyboard is for keeps (and physical MIDI-keys and knobs for that matter), but I’ll happily throw out the mouse any day.

Going back to Microtonic, and in particular to your website’s f.a.q. section (which is a “must” for those who haven’t seen it yet, btw), have you been able to make that “comprehensible interface” for your robotic voice compression alghorithm?

Nope. I still recompile the source-code whenever I change parameters for the synthesis. People really love that robot voice. I put it into MicroTonic to nag people into buying it, but some people have actually written to me expressing their disappointment over that the little guy went away after they purchased and registered. I have already heard three different songs that feature samples of the voice, so I guess it is well about time to make a little product out of it. 🙂

Which is the relation between the environment and the development of new software? I know you’re now spending some time in some deep (and I guess not that crowded!) forests, up there in your Sweden, and I’m very curious about your next things…

Funny you ask, because my very next Sonic Charge release will be something with more than one link to environment. I know you are very curious, and I would love to spill some details about it, but I know from experience that revealing secrets about unreleased products only risks putting me in a corner and limit my freedom. I can tell you this much that you haven’t seen a user-interface quite like it before, and the way that you will create and explore sounds will be something rather new… something organic.